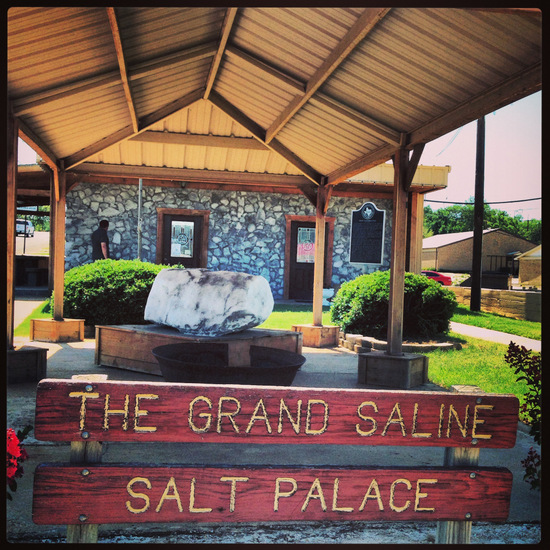 Unexpected Texas: Building Made of Salt

The following is an excerpt from my upcoming quirky travel book, Unexpected Texas:

While the French equivalent of “window shopping” translates as “window licking” this is something that literally occurs every day at the Salt Palace in Grand Saline, Texas. The unusual building, which houses a visitor center and museum for the town and the nearby Morton Salt Company mine, is built entirely out of salt crystal bricks held together by a salt/mortar mixture. This strange combination proves tempting to many visitors who satisfy their curiosity by taking a tiny lick of its walls.

The building now standing is the third incarnation of this salty enterprise. The first “Salt Palace” (shack, would be a more accurate moniker) was a mock-up of The Alamo created for the 1936 Texas Centennial Celebration. Texas weather being what it is, the building eventually eroded. Another Salt Palace was built in 1975 by local citizens who also created the first annual Salt Festival which continues to be held every year on the second weekend of June.

Heavy rain took its toll on Salt Palace number two, so in 1993 a third version was erected. This time, an aluminum overhang was added to protect it from the elements. While it’s an impressive site, the name, “Salt Palace” is a bit grandiose for the little one-story building that bears the name.

Grand Saline has had a salt factory since 1839 and during the Civil War the factory supplied the Confederacy with 500 pounds of salt per day. Around 1920, Morton Salt stepped in and the little girl with the yellow umbrella took over. Minors harvest salt from 750 feet below ground, remnants of an ancient sea that covered east Texas 250 million years ago. Grand Saline’s mines contain a large and high quality salt deposit. It’s been estimated to contain enough salt to supply the entire world for the next 20,000 years.

Tours of the nearby Morton Salt mines are no longer available due to safety regulations enacted in the 1960’s, but the Salt Palace houses a museum which offers a movie showing mining production, mining artifacts and other historic memorabilia.

Plan your trip to the Salt Palace: