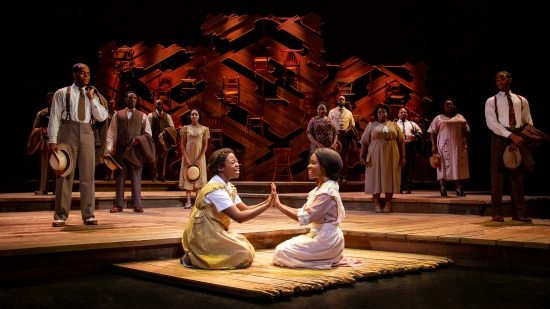 Opening night for THE COLOR PURPLE in Dallas ended with a cheering crowd and a standing ovation at the Winspear Opera House in the downtown Dallas Arts District.

THE COLOR PURPLE is a Tony Award-winning musical revival based on the Pulitzer Prize winning novel by Alice Walker. The story spans the years 1910 through 1940, and the Grammy-winning score expertly infuses the musical flavors of that era, everything from gospel, jazz, ragtime, and blues.

For those unfamiliar with the source material, the opening scene of THE COLOR PURPLE may come as a jolt. The casual manner in which 14-year-old Celie (Mariah Lyttle) mentions that her two children were fathered by her dad (Jeremy Whatley) may shock you. To Celie, it’s a matter of fact event. After her mother died, her father expected her to fulfill her role in every way, from keeping house to having sex. He’s in charge, and it’s the only world Celie has ever known.

Each time she gives birth, Celie’s dad, Alphonso, takes the baby away. While she prays that he gives them up for adoption, the local rumor mill claims that he kills these babies in the woods. The one joy in Celie’s life is the unconditional love she shares with her little sister, Nettie (Nashka Desrosiers.)

Celie is willing to bear her dad’s abuse because it shields Nettie from him and gives the younger girl the opportunity to attend school. It’s hardly ideal, but Celie clings to Nettie and the possibilities for Nettie’s future as her one sustaining hope.

Even this tiny bit of solace is soon stolen from Celie. After much negotiation, a man Celie knows only as “Mister” (Andrew Malone), takes her as his wife. Being Mister’s wife means more abuse and thankless servitude, only this time with step-children and a bigger house to maintain. Mister keeps Celie locked up in the house and forbids her from writing letters to Nettie. As the years pass, Mister even lets her conclude that Nettie must be dead since she never hears from her.

Eventually, two unusual women enter Celie’s life. Unlike the other women she has known, these ladies take charge of their lives in a way that Celie would have never believed possible. The first is the wife of Mister’s son, Harpo (Brandon A. Wright.) Her name is Sofia (Chédra Arielle), and Celie is both shocked and delighted to watch Sofia stand up for herself in her relationship with Harpo. Sofia says what she thinks and clearly feels equal to anyone else, man or woman.

It’s also shocking for Celie to see how physically affectionate they are, something Celie has had very little of in her life. My favorite song and dance number from the show is when Sofia and Harpo kiss and make up in the hilariously suggestive “Any Little Thing.”

The other woman to rock Celie’s world is Shug Avery (Sandie Lee.) Long before she steps onto the stage, Shug’s presence is felt in this story. Everyone in town is fascinated by her whether they speak good or ill of her. Shug managed to escape her small town fate by making a career for herself as a jazz singer, and leads an exotic life full of fancy clothes and travel.

Although the music is great throughout, it wasn’t until Shug sang “Push da Button” in the first act that I felt the musical side of this show really came to life. Like Sofia, she does not let men dominate her, and she actually enjoys sex.

Mister makes it no secret that he is head-over-heels for Shug, and when she falls ill, he brings her home and tells Celie to take care of her. Although quite rude to Celie at first, the two women eventually become close friends, and later, lovers, although the musical does not delve too deeply into this.

The dire circumstances and the grim realities of Celie’s life remind me of the trials a Charles Dickens character would endure.  Much like Oliver Twist, Celie is born into a world where she is not seen for who she is, but exploited by others.

I don’t want to give away the entire story, but suffice it to say that in the end all the plot lines are exuberantly resolved: we learn the true fate of Nettie, we find out what happened to Celie’s children, and most importantly, we see a self-assured Celie carve out a place for herself as an independent woman and proudly announce to the world that “I’m here!”

See The Color Purple in Dallas: