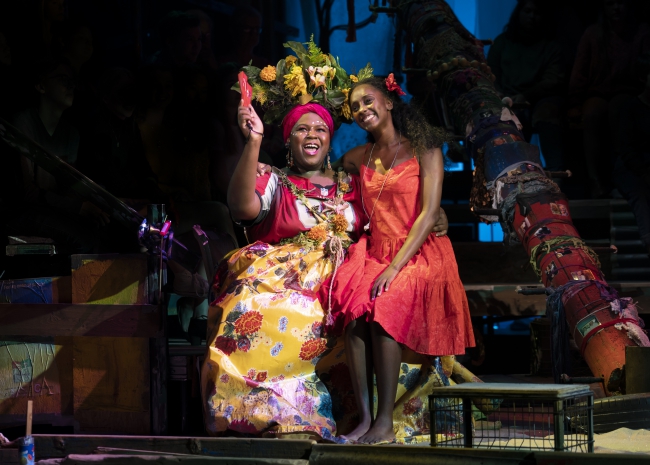 REVIEW: Once On This Island – A Vibrant Tale in Storm-Ravaged Paradise

Opening Night for Once On This Island

Opening night for ONCE ON THIS ISLAND, brought Caribbean heat to chilly North Dallas at the Winspear Opera House in the downtown Dallas Arts District. I was excited to attend since Lynn Ahrens and Stephen Flaherty’s catchy lyrics and island rhythms won the 2018 Tony Award for Best Revival of a Musical with this captivating production.

ONCE ON THIS ISLAND is set on an island in the French Antilles, although we never find out precisely which one. Even before the show starts, we quickly realize that the world of this play is an impoverished tropical paradise. As audience members file into the theatre, the curtain is already up, revealing characters who live in a beachside shantytown, with buildings created from a patchwork of corrugated tin. The staging is innovative, with the musicians on platforms overhead and room for 50 audience members to sit directly onstage, for what must have been a uniquely immersive experience.

The plot of ONCE ON THIS ISLAND unfurls as adults retelling a well-worn legend to a little schoolgirl who is hearing the tale for the first time. This story revolves around an orphan named Ti Moune (Courtnee Carter.) After her family is swept away during a storm, Ti Moune is adopted by an elderly couple. Despite living on the poor side of the island, she is a joyous girl who grows into a beautiful young woman.

As Ti Moune grows up, she ponders why she survived the storm. Surely the gods must have important plans for her, and as the play progresses we see and hear four island gods plotting her fate. There’s Asaka (Kyle Ramar Freeman), the mother goddess, who is colorful and comforting; Erzulie, the Goddess of Love, (Cassondra James) who is graceful and plays the flute; and Agwe, the God of the Sea, (Jahmaul Bakare) who is robust and temperamental. My favorite, however, is Papa Ge a.k.a. the God of Death. American Idol fans may recognize Tamyra Gray in this role. To me, she perfectly embodies the enticing-yet-threatening presence of death.

When a handsome young man from the rich side of the island wrecks his car near Ti Moune’s family, she decides that healing him must be what the Gods have planned for her. She devotedly nurses the young man, falling in love in the process. Of course, since she lives on the poor side of the island and he comes from the rich side, their romance does not end well. No spoilers here, but the tremendously talented cast, imaginative staging, infectious choreography, and catchy music buoy this fast-paced story along to a surprising conclusion.

As I watched the play, it felt like an ancient folktale. In fact, I expected to learn that ONCE ON THIS ISLAND was based on a centuries-old story directly connected to the French Antilles. After all, many such tales involve the heartbreak created by arranged marriages, with lovers divided by their station in life.

So I was quite surprised to learn that ONCE ON THIS ISLAND is based on a modern story, specifically the 1985 novel My Love, My Love by Rosa Guy. Guy’s novel is, in turn, a Caribbean retelling of the original “Little Mermaid,” by Hans Christian Anderson.

When I thought this was a retelling of a local folktale, I was willing to overlook the thinness of Ti Moune’s love for a good-looking man who was happy to use her and made no effort to fight for her. Had I existed as a fifth god in that island universe, I would have told her, “Honey, he doesn’t deserve you!” Even so, I left ONCE ON THIS ISLAND with a satisfied smile on my face, and a Caribbean-influenced spring in my step.

See Once On This Island in Dallas: