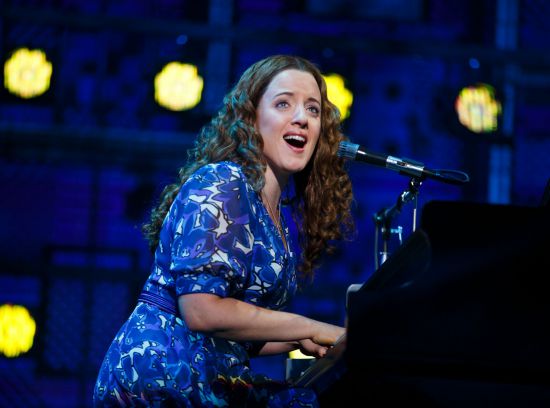 When a major recording artist is featured in a jukebox musical, you can pretty much guess which songs will be recorded – or so I thought before attending Beautiful: The Carole King Musical. The national tour of this Tony Award winning show opened in Dallas, Texas last night to a packed house at the AT&T Performing Arts Center.

Beautiful includes plenty of Carole King songs, but what surprised me was how many other familiar tunes came along for the ride. For instance, I didn’t know Carole King and her early songwriting partner, Gerry Goffin, spent a good 10 years writing for other recording artists before King dared to go solo.

Over the years, King and Goffin cranked out no less than 118 pop hits including: “The Locomotion” (Little Eva), “I’m Into Something Good” (Herman’s Hermits), “Pleasant Valley Sunday” (The Monkees), “A Natural Woman” (Aretha Franklin), “One Fine Day” (Chiffons), and “Will You Love Me Tomorrow” (Shirelles), among many, many more!

The plot for Beautiful: The Carole King Musical follows King’s career from a precocious start at age 16 to her triumphant Carnegie Hall appearance in 1971 at the age of 29.

As the fast-paced production hops from one catchy hit to the next, we follow the lives of Carole King and her songwriting partner, Gerry Goffin, through their productive career and tumultuous marriage. In the 1960’s, the duo shared an office next door to another prolific songwriting team: that of Cynthia Weil and Barry Mann. Despite intense competition on the musical front, the four soon become fast friends.

Although the story touches on heavy topics including depression, drug use and infidelity, Beautiful uses snappy dialogue and humor to create a lighthearted tone in the opening scenes and maintains this throughout.

This sitcom approach works because the true emotional movement of the story is created by witnessing Carole King go from domestic struggles and stage fright to an independent woman in charge of her own creative spirit. In fact, Carole King’s songs do most of the heavy lifting, emotion-wise.

I know I’m not the only one who was swept along by the breezy narrative. At one point, when the packed crowd in Dallas let out a collective gasp, my husband leaned over and whispered, “Listen to this audience!” At other key moments attendees cheered and/or broke into spontaneous applause to encourage Carole King along her life’s journey.

In this 2016 Broadway touring cast, Abby Mueller‘s performance as Carole King is a real knock out. Rather than attempt to impersonate Carole King, Mueller somehow embodies the famous songstress. At times, Mueller’s performance made me giggle with appreciation at how perfectly she captured King’s particular way of phrasing and her overall style without ever turning it into a caricature. (Incidentally, Abby’s little sister, Jessie Mueller, snagged a Tony for originating the Carole King role on Broadway.)

Liam Tobin brought as much depth to his portrayal of Carole King’s first husband and songwriting partner, Gerry Goffin as the material allowed. It’s not Goffin’s story, after all, and there was only so much room in the plot to delve into his struggles with addiction and manic depression.

The biggest laughs of the night belonged to Ben Fankhauser as the talented hypochondriac, Barry Mann, while Becky Gulsvig is vibrant and adorable in her role as the commitment-phobic lyricist, Cynthia Weil.

Beautiful: How does Carole King feel about it?

Since the story is based on living people, Douglas McGrath created the characters in his book after extensive research and personal interviews, especially with the four main characters: Carole King, Gerry Goffin, Barry Mann and Cynthia Weil.

In case you’re wondering how Carole King feels about the musical based on her life, the first time she saw Beautiful: The Carole King Musical, King was so overcome by emotion that she left during intermission. She has since come to terms with seeing her life portrayed on stage.

These days, King makes a point of watching each actress who portrays her, although she attends performances secretly, wearing a full disguise to as not to draw attention to herself or intimidate the cast. She even advised Abby Mueller to, “Have fun being me,” when the pair met on the set of NBC’s “Today” show.

As for my advice: Grab your tickets to Beautiful: The Carole King Musical while you can!