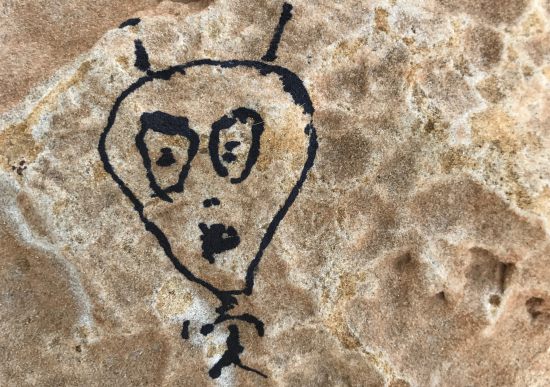 50 Years before The Roswell Incident

The following is an adapted excerpt from Unexpected Texas, my quirky travel guide to offbeat and overlooked day trips near Dallas and Fort Worth: You’ve probably heard of the alleged spaceship crash from 1947 that took place in the desert of New Mexico. Known as “The Roswell Incident” this is arguably the most famous case in UFO history. Yet here in Texas, there exists an alleged spaceship crash – complete with an alien body – which took place 50 years earlier! So imagine how excited I was to find out that I live a hop, skip and jump from “the Roswell of Texas.”

One thing that makes this bizarre incident so fascinating is that the space alien’s body was buried by the townspeople. You can check it out for yourself by visiting the historic country graveyard in Aurora, Texas. (The city of Aurora is even erecting a Sculpture of the 1897 UFO Crash to commemorate this bizarre legend!)

As a travel writer, I make a point to check out every State Historical Marker I come across. The one next the Aurora Cemetery gate, however, is the strangest one I’ve ever come across because it reads, in part, “This site is also well known because of the legend that a spaceship crashed nearby and the pilot, killed in the crash, was buried here.”  Check it out for yourself in the photo below:

So what exactly happened here in Aurora, Texas back in 1897? Well, according to a newspaper article published by the Dallas News in April of 1897, a cigar-shaped object crashed in a farmer’s field, an alien body was found in the debris, and this little humanoid was buried in the local cemetery. For a more detailed account of this incident, along with a photo of the now-missing headstone, visit: 1897 UFO Crash & Alien Body – Is this the Roswell of Texas?

When I first visited Aurora Cemetery in June of 2012, a hand-carved stone depicting a cigar-shaped craft marked the spot  where Texas settlers buried space alien’s charred body. Sadly, when I returned in March of 2013, the headstone was missing! All I found in its place was a rock the size of a baseball and some plastic flowers. Since then, a big, heavy rock accompanied by a wooden cross was placed in the graveyard to commemorate where “Ned” (as the locals have nicknamed the creature) is buried.

Oddly enough, this new marker is in a slightly different spot than the marker I first saw back in 2012. I’m not sure which spot is more accurate, however! I will have to dig back through my photos from 2012 to verify this. I will share photos here when I do!

The Great Texas Airship Mystery of 1897

Another intriguing aspect to this strange slice of history, is that the Aurora spaceship crash is just one of hundreds – yes, HUNDREDS –  of UFO sightings reported in Texas throughout March and April of 1897. And oddly enough, these sightings didn’t slowly trickle out as you would expect. They just abruptly ended. By May of 1897, the “Great Texas Airship Sightings” were over.

I am currently writing a book about the public’s reaction to the Great Texas Airship Sightings of 1897. If you’d like to see some of the research I dug up on the subject, check out the presentation I gave last year at the Aurora Alien Encounter, the first annual UFO Expo to commemorate the 1897 UFO crash in Aurora, Texas. (My photo even made the local paper – whee!)

Here’s a link to a video of my presentation called What on Earth were They Thinking? Public Reaction to the 1897 Airship Mystery:  https://www.youtube.com/watch?v=GEH7mM16ONc

I’m not the only one inspired by the Aurora, Texas UFO crash of 1897. Today, I met up with fellow writer, Donna Latham, and took her to Aurora Cemetery so she could see the alien gravesite for herself. Donna is an award winning author and playwright who drove up from Houston for a writing research road trip with her husband. (I love going on those with my own hubby!)

Donna came across my name while looking into the Aurora alien grave. Her play is still in its infancy but I am really excited to see what she ends up creating! For more about Donna Latham, drop by her official website:  http://www.donnalatham.com/

If you ever make it to north Texas and wish to visit the Aurora space alien grave, let me know what you see. There isn’t an official street address for Aurora Cemetery, but it’s easy to find. If you have a GPS, set it for: Cemetery Rd, Aurora, TX 76078. If not, head towards Rhome, Texas on US 81/287. Exit onto Highway 114, drive roughly 1.5 miles then turn onto Cemetery Road. The cemetery will be on your lefthand side.