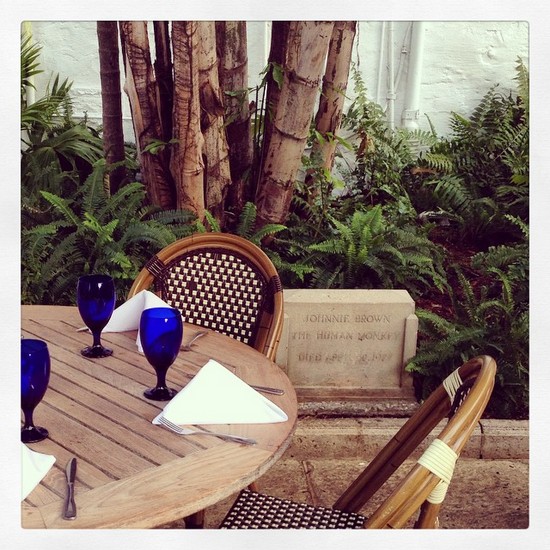 2 Graves at an Italian Restaurant?

Voted #3 in a list of the Top 10 Iconic Streets in the USA, Worth Avenue is an upscale shopping street in the resort town of Palm Beach, Florida.

So why are there two graves on Worth Avenue – one for a monkey and the other for a dog – tucked away in the courtyard of an Italian restaurant?

It all starts with Addison Mizner (1872-1933) a quirky architect who settled in South Florida in 1918 after having lived all over the world, including China, New York, Guatemala, Alaska, and California.

Mizner’s architectural designs made a tremendous impact on South Florida. While builders prior to him based their designs on wood and shingles, Mizner’s “Mediterranean Revival” style favored tile, stucco, and stone.

Not only are Mizner’s buildings beautiful, with a real European flavor, but they withstand hurricanes better than wood and are well-ventilated (a real plus in an era before air-conditioning.) Mizner soon made a fortune designing opulent mansions and social clubs throughout the region.

Monkey on one shoulder, a parrot on the other

Throughout the Roaring Twenties Addison Mizner was an eccentric man about town, known for his menagerie which included raccoons, macaws, and anteaters. Mizner lived on Worth Avenue in Palm Beach, which is now an upscale shopping street with a labyrinthine maze of garden courtyards. His lavish dwelling had a large iron gate and trapdoors for dropping boiling oil on trespassers!

In addition to Johnnie Brown, Mizner had two other spider monkeys, Ethel and Deuteronomy. Johnnie Brown, however, was Mizner’s favorite. The architect often stepped out with Johnnie Brown on one shoulder and a parrot on the other.

I’m not sure why he was known as “the human monkey,” but Johnnie Brown certainly had a lot of personality. When he wasn’t happily cavorting through the foliage and vines of Via Mizner, he enjoyed stalking the milkman so he could sneakily pop the caps off of his deliveries.
In 1925, Johnnie Brown was even invited to the Scopes Monkey Trial!

After Johnnie Browns’ death, Addison Mizner buried him in the courtyard of his home in Palm Beach with a cement headstone inscribed:

After Addison Mizner’s death in 1933 wealthy socialites, Rose and Morton Sachs, bought Via Mizner and lived there until 1983. When the Sachs’ beloved golden retriever, Laddie, died in 1959, the couple buried him in the same courtyard as Johnnie Brown. Laddie’s white marble tombstone is adorned with Christian crosses and reads:

While I don’t know if Laddie and Johnnie Brown knew each other in life, according to Palm Beach ghost hunters, their ghosts have been spotted playing together in Via Mizner. If I find out any more about it, I will share it in another post.

As you can see from the photo at the top of this post, the graves for Johnnie Brown and Laddie are now part of the outdoor dining area at Pizza al Fresco (14 Via Mizner, Palm Beach, Florida.) On the day I visited, I didn’t seen any ghosts, but the lovely courtyard bustled with diners enjoying the shady outdoor seating on a beautiful winter day in Florida.
To see more photos of Worth Avenue, click this link: Worth Avenue – photos by Tui Snider.
To read more about Johnnie Brown and Addison Mizner, check out this article over at one of my favorite websites, Roadside America: Grave of Johnnie Brown, the Human Monkey.

I am currently writing a field guide to historic cemetery symbolism. Each week, I share a small snippet from my upcoming book, as well as my travels to interesting graveyards and the stories behind unusual burials around the world.

It’s my goal to create a handy-dandy pocket guide for taphophiles, genealogists, ghost hunters, and anyone else interested in the historic graveyard symbols that have become forgotten over the years.

Let me know in the comments if there is a certain symbol that you are curious about. Also, if you would like to know when the cemetery symbolism guide is available for purchase, scroll down and sign up for my newsletter! I look forward to hearing from you!