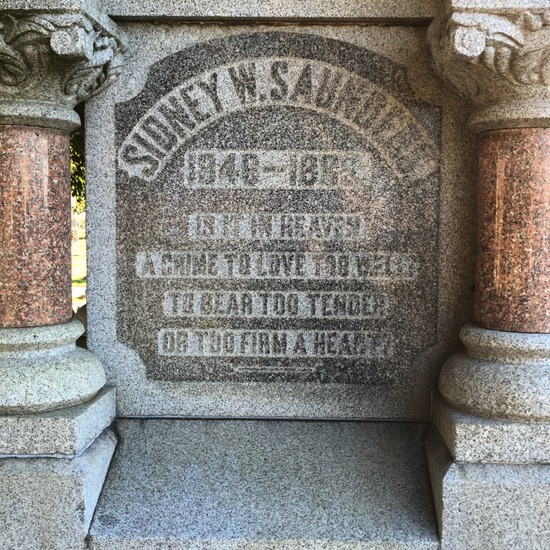 The Tale of Annie & Sidney Saunders

For Valentine’s Day, I bring you this tale of a lovelorn widow tormented by malicious gossip, who used her husband’s grave to set the record straight:

In the late 1800’s, Sidney Saunders was a wealthy grocer and saloonkeeper in Monroe, Louisiana. Like any successful businessman, Mr. Saunders had detractors. In his case, many townspeople suspected that the bulk of his fortune came from illegal channels, including brothels and gambling.

But the gossips really had a field day when Sidney Saunders left on business and returned with Annie E. Livingston on his arm. Although they claimed to be newlyweds, many locals had their doubts. Not only was Annie rumored to be of “mixed race,” but it was suggested that the two were not actually married and that she was, in fact, a prostitute from one of Sidney’s brothels.

It must have been difficult to ignore the dirty looks and social ostracism, but Mr. and Mrs. Saunders did their best. Fitting in with the townspeople of Monroe was only one of many challenges faced by the couple. For starters, their only son, Willie St. John, died at age 12.

Yet another scandal for Sidney Saunders

A couple years later, a big fire destroyed several of Sidney Saunders’ business properties. Rather than pity him, locals accused Mr. Saunders of setting the fire so he could collect insurance money. When the matter came before a judge, however, Sidney was declared too feeble, both physically and mentally, to stand trial.

After that scandal, Sidney Saunders remained on edge. He lived in constant fear, worried he might be lynched or otherwise harassed by the citizens of Monroe, Louisiana.

The Saunders’ worst fears were realized on February 1, 1889 when Annie found Sidney’s lifeless body in their home. Although the cause of death was a bullet wound to the *back* of his head, there was no murder investigation. Why? Because Sidney Saunders’ death was ruled a suicide!

Despite the fire and other misfortunes, Mr. Saunders had done quite well for himself and his estate was worth $83,000. So, no sooner did he pass away than his family became very interested in the “are they or aren’t they married” debate.

After a courier was sent to St. Louis, Annie and Sidney’s marriage certificate was finally verified to the satisfaction of those in charge of settling her husband’s estate. Annie received $7250 in cash and a parcel of land in Texarkana. The rest was split between Sidney’s brothers and sisters.

With her husband and only child dead, you might expect that Annie E. Livingston would take that money and run…or at least move a few towns over and start a new life where she would no longer face the scorn of her neighbors on a daily basis.

Instead, the grieving widow spent most of her inheritance on a specially carved grave marker. The granite monument features a statue of her late husband, Sidney Saunders, on top. In is left hand, he holds a copy of their marriage certificate. To further emphasize her point, Annie oriented Sidney’s statue so that his stony stare is aimed directly at the heart of downtown Monroe, Louisiana.

As you can see in the top photo on this post, the monument includes a pair of hearts pierced by Cupid’s arrow to indicate the romantic love Annie shared with Sidney.

But Annie was not content with symbols, alone. Determined to “set the record straight,” Saunders’ widow used her inheritance to commission a lengthy inscription on her husband’s grave marker.

The words Annie chose tell quite a story!

This is to certify that Sidney W. Saunders & Annie Livingston of Monroe, in the State of La., were by me joined together in holy matrimony, March 25, 1875. ‘John M. Young, justice of the peace, City of St. Louis.’ Witnesses: John W. Rice, Frank Gregory.

The following words are carved into a series of panels on the monument’s base:

Sidney, I could have well forgiven
That last seemingly cruel act of thine
For you wanted me with you in heaven
Had you with your life taken mine.
Trembling and alone I tread
Life’s dreary strand
Beset by envy, strife, and jealousy
But ‘mid it all, God and love of thee,
Has staid my hand
To raise this marble to thy memory.

My husband, may God in mercy pardon me
If when here I come to weep and pray
All my soul and thought shall be of thee.
And wrapt in thee my idol from the maker stray.
Farewell, this monument is not my last adieu,
Till in heaven we meet no more to separate,
I say in Heaven
For where’er you are, our boy and you
There is my Heaven
For that alone your faithful, loving wife,
Prays, watches and waits.

Willie St. John
Son of S.W. and A. Saunders
Died May 13, 1886
Willie my beloved treasure
My bright beautiful loving jewel.
Mama’s weary heavy heart
Is yearning to be at rest with thee.
Oh! Art thou my precious angel
Longing to be with me
Your lonely unhappy mother?

Sadly, on the panel that is left for Annie’s inscription, the stone remains blank. I wonder what words she had planned for epitaph? We may never know.

Now, here’s where the story gets a little eerie and sad. See those rusty doors in the side of the burial mound? Those are doors to the crypt where Annie had her husband and son’s bodies placed.

The vault inside also contains Sidney Saunders’ favorite desk and chair, a sewing machine, and her son’s velocipede. (Click here to see a velocipede.) According to local lore, Annie Livingston spent several hours a day inside that vault, mourning, praying, and sewing. She even hung curtains inside!

The widow eventually came out of mourning and moved to the property she inherited from Sidney Saunders. She even remarried, to the mayor of Texarkana, no less. After all she had been through, I’d like to think that she finally got the happy ending she desired.

When she died in 1926, Annie’s body was returned to Monroe, Louisiana and laid to rest with her first husband in the crypt below the monument she had placed there.

In 2001, historians recovered a copy of the infamous marriage certificate for Annie and Sidney. The wording is exactly the same as the inscription Annie had carved into her husband’s monument.

So, case closed? Not quite…
One little quibble remains. You see, historians noticed that the Saunders’ marriage certificate was not officially filed and recorded until after Sidney’s death. In fact, it was quietly recorded during the big fight between Annie and Sidney’s siblings over his will.

Directions: Old City Cemetery is in historic downtown Monroe, Louisiana at the intersection of Desiard St. and Elysian Fields Rd. Saunders’ statue is very close to the graveyard’s entrance. You really can’t miss it! Just drive in and look to your left. Old City Cemetery is easy to find, as well. So if your travels take you through Louisiana, check it out and let me know what you think!

Excellent article and info about Annie and Sidney Saunders here: Find a Grave. I’m a huge fan of Findagrave.com, by the way. It’s a wonderful site!

Another site I adore is Roadside America. It’s very useful for finding offbeat and overlooked places to explore on road trips. In fact, I first heard about Sidney and Annie Saunders via this article over at Roadside America: Grave of a Married Man

Before you go… Want to keep up with me?

FREE GIFT: As a thank you for signing up to my newsletter, you’ll receive a historic cemetery symbols guide I created called “A Quick Guide to The Many Meanings of Hands.”