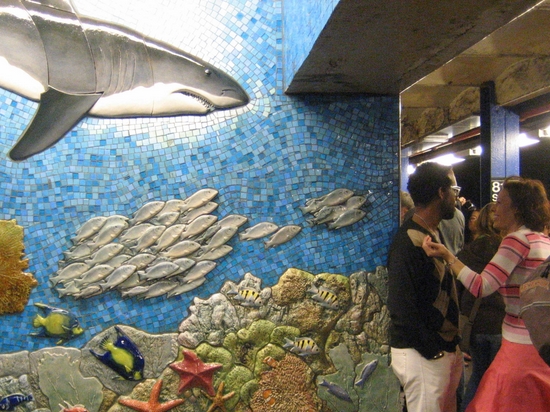 Welcome to this week’s Traveler’s Show & Tell blog carnival. As usual, I have contributed a photo to accompany the best travel-related blog posts I received this week. Read on to learn the truth about cat poop coffee, which pool in Las Vegas features a “human aquarium,” and where I recently spotted the mythical land shark.

I spotted this particular Land Shark moving in on an unsuspecting couple while taking the subway in New York City. It was my first-ever trip on the subway, and the people-watching was as good as I had hoped. I even saw one of those posters claiming that the world was gonna end in May 2011.

1. “The Most Expensive Coffee in the World: Civet Poop Coffee” by Dawn Xiana Moon

Dawn Xiana Moon presents The Most Expensive Coffee in the World: Civet Poop Coffee posted at Kitchen Lore.  As a major coffee aficionado and recovering barista, I’ve been curious about this civet brew for a while.  Dawn’s blog post tells all:

“How desperate for your morning caffeine would you have to be in order to try drinking coffee found in animal excrement? In short: ask the Indonesians, who would then blame the Dutch… It takes something special to move from discovering undigested coffee beans in excrement to deciding to clean, roast, grind, and brew a pot from the stuff, but apparently the farmers were crazy enough to think that this was a good idea.”

2. “What I did to say goodbye to Berlin” by Nine

Nine presents a series of broody vignettes which sum up the shifting emotions of an inner journey through Berlin in a post called, What I did to say goodbye to Berlin posted at Abyssinia, Henry, saying:

“A description? I lived in Berlin for a few months, then left in a hurry, lost and heartbroken. I’ve been travelling ever since. I’m not heartbroken any more.”

Grant Ward recently took a dramatic plunge, doing what many of us often daydream about, but are reluctant to follow through with.  Grant describes this major life decision in a post entitled, Broke and Busted in Bangkok April 2011 posted at 12 Homes 12 Months, saying:

“I have sold my house, car, furniture and what I have left I’ve given to Friends and charity. My mission is to find the best place in the world to live(for me).I want to live authentically and in the moment and experience cultures different to mine. 12 homes in 12 months is my journey.”

4. “We’re Going On An Adventure, Charlie!” by Carly

Carly presents We’re Going On An Adventure, Charlie! posted at CREATElive, a breezy, high-spirited account of a trip to Chicago, which begins:

The afternevening began on the train. My brother, sister, and I were on our way to meet my dad, who had been working downtown. Other than making sure we found each other, we had no plans.

“My friend and I toured the South of Ireland and were both completely taken by all things green and Guinness. These are definitely tourist photos, but it’s just too pretty for me to care.”

6. “In Praise of Tour Guides (especially in Toronto)” by Matthew Hyde

Matthew Hyde offers a gregarious shout-out to those folks who patiently answer the same questions from eager tourists day after day in a post called,  In Praise of Tour Guides (especially in Toronto) posted at Geeks Shall Inherit the Earth, saying:

“Following my trip to Toronto last year I was prompted to pay tribute to the unsung heroes of my holidays – the tour guides and park rangers, occupations with unacknowledged levels of geek cred.”

Emma Shoshanna vividly describes her coworkers in Sidney, Australia and how she, as an American, is equally exotic to them in a post entitled, Intern Lunch: Thirsty Thursdays are Worldwide posted at The Girl with the Traveling Blue Shoes, saying:

“This quirky, fun blog takes you abroad in my shoes, giving a 19-year-old, Jewish college student’s perspective on life in another country.”

8. “Pool Time is Here in Las Vegas” by Shanna Stenehjem

Shanna Stenehjem presents Pool Time is Here in Las Vegas posted at Maverick Grand Canyon Tours I nearly didn’t include this article since it is more commercial than I prefer for this blog carnival, but the post describes some truly interesting pools in Las Vegas, and the site lets readers leave comments. There’s an underwater infinity pool, for instance, that creates a “human aquarium.” (Besides, it was 114 degrees here in north Texas yesterday. Can you blame me for daydreaming about pools?) Here’s a description for you:

“With temperatures getting hotter, Vegas pools are the place to be. We at Maverick Helicopters see these amazing pools from the sky every time we fly over … and we have some details on how these pools provide amazing fun in the sun…”

Did you enjoy this week’s Show & Tell?

That’s it for this week’s blog carnival, Traveler’s Show & Tell. As always, if you enjoyed it, let us know in the comments section. Also, please let the author know you liked their piece by leaving a comment at their blog. See you next week! :)

If so, submit your blog article to the next edition of Traveler’s Show and Tell using this carnival submission form. (If that link doesn’t work for you, tell me in the comments section and I’ll send you and email.) Past posts and future hosts (would you like to be one?) can be found on the blog carnival index page.