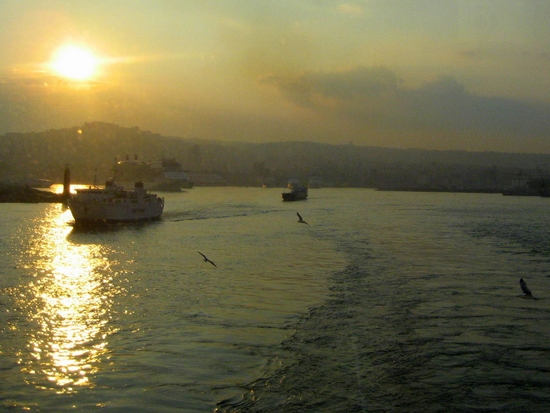 Welcome to this week’s Traveler’s Show & Tell blog carnival. This week’s blog carnival offers a variety of intriguing traveler’s tales, with lovely photos, to boot. Read on to learn:

…why the world’s oldest hitchhiker was featured in a TEDx talk in India, and has thrived for 40 years without a job.

…where you should beware of monitor lizards and open manhole covers when out for a stroll.

…which country has such a low crime rate that there are fewer than 200 of its citizens behind bars.

I snapped this week’s photo earlier this year on my honeymoon cruise through the Mediterranean. The shot was taken just as the sun was setting over the Bay of Naples, Italy. I consider Naples my Italian home away from home, so my feelings were mixed after our all-too-brief visit there. Even so, it was fun showing my husband around my old haunts. If only I could have taken some fresh buffalo mozzarella and fried provola home in my luggage!

Matthew Hyde presents Some New York Memories posted at Geeks Shall Inherit the Earth, which he describes as,

“Exactly what it says on the tin, these are my memories of my trips to New York.”

Like Matthew Hyde, I have been to New York city twice, and I understand what he meant with:

“…it doesn’t seem quite real; half of it is a bustling, chaotic 24/7 city made up of cops, business people, street sweepers and waitresses, while the other half is a film set, pregnant with possibility. Bumping into Kevin Bacon, glimpsing Spider-Man crawling up a building – these are equally likely possibilities. After all, I saw Jimi Hendrix.”

OK, so my celebrity sighting was Deepak Chopra, but still, I know what he means.

2. ” Spotlight On: Iceland” by Perrin Smith

Perrin Smith presents Spotlight On: Iceland posted at nod ‘n’ smile. For those of you who, like me, are smack dab in the middle of the 2011 summer heat wave, Perrin Smith’s beautiful photos will make you want to dive right into the computer screen to cool off. Perrin found some things rather surprising, such as:

“…how fashionable everyone is, the extremely low crime rate (less than 200 inmates in the entire country!), the presence of taxidermied animals in a large number of stores, the policeman who whipped out a portable credit card machine to let us pay our speeding ticket.”

3. “Traveling with Kids to Stockholm” by Rebecca

“You are most likely familiar with characters like Pippi Longstocking and in Stockholm you will find a place with her and all of the other unique personalities that the author Astrid Lindgren invented. At Junibacken, kids get to touch and feel the environments described in the books and films and there is also material for English speakers so this is a good choice when you travel to Stockholm with kids.”

I loved Pippi Longstocking as a kid, even going so far as putting wires in my hair to imitate her wacky braids. Rebecca’s post gives plenty of other tips, too, for traveling in Stockholm with kids.

“Finally after 7 hours of tense travel, we arrived in Batu Karas at 8 am. Why tense travel? My friend who driving was so crazy. We felt a few times near death. Horrible! In the holidays like this, many peoples visited here and it was difficult to find a place to stay.”

“Lakwatsa (wandering/travel around) Connoisseur is a blog about everything and anything that can spice up your boring old life. It is an ultimate guide for every lakwatsera (a person who likes and enjoys wandering/traveling/going out)”

In this exuberant post, Anna Beatrix Dela Torre and her sister were on the hunt for regional cuisine:

Last Friday, we went to Ilocos Sur just for a weekend food trip. Seryoso, we just went there to eat! I literally gained 5 pounds because of all the stuff I ate. I have impatso (indigestion) right now, but no regrets, just love (Katy Perry, 2010).

I love all the slang she uses. Can’t say I understood it all, but Anna’s writing is as flavorful as the food she describes.

Stephen Sovie presents A Nice Day for a Walk posted at Retired in Malaysia, saying,

“One activity that is enjoyed by foreign tourists and expats who live in Penang is walking around the area enjoying the beautiful scenery and fantastic architecture. In Georgetown on any given day one can see hundreds of people walking the streets with their cameras around their necks.”

I love taking photo walks, too, although it’s too darn hot for that right now in Texas. Walking in Penang comes with its own unique set of hazards, which Steven Sovie explains in his post.

“A few weeks ago I had the honor of interviewing one of the most fascinating people I’ve ever met, and certainly one of the most unique people I spent time with during my 5+ month car-less solo journey to the US West Coast and back. In addition to hitchhiking across the US and Europe, he has biked across Canada, written multiple books, and has been happily jobless for over 40 years now. And as far as I know, he’s been hitchhiking, on and off, for longer than anyone else alive: over 66 years!”

It came to a head on one job where I needed a raise because my wife needed dental work, and they wouldn’t give me a raise. And so, that was it. I was fed up with the whole thing. I wrote a lousy letter to my boss, telling him I was the best programmer he’s got, and I’m leaving and that’s that.

Although I personally don’t recommend hitchhiking, it’s a fascinating interview, with an adventurous traveler.

8. “Motorway Art: The Hitchhiker gets a lift” by Art

Speaking of hitchhikers, Art presents Motorway Art: The Hitchhiker gets a lift posted at The Helpful Engineer. In his post, Art explains that although a roadside sculpture called, “The Hitchhiker” was stolen, he doesn’t particularly miss it:

“In Ireland we are lucky, for the most part, to have a varied and scenic landscape surrounding our motorways. As the landscape is interesting; does it really need to be enhanced by an expensive piece of metal?”

To prove that he’s not just a curmudgeon, Art goes on to show examples of Irish roadside sculptures that he truly likes, pieces he hopes will not go the way of “The Hitchhiker.” After all, his name is Art!

Did you enjoy this week’s Show & Tell?

That’s it for this week’s blog carnival, Traveler’s Show & Tell. As always, if you enjoyed it, let us know in the comments section. Also, please let the author know you liked their piece by leaving a comment at their blog. See you next week! :)

If so, submit your blog article to the next edition of Traveler’s Show and Tell using this carnival submission form. Please include the following two things with your submission: 1. Your email address (because the site has been buggy lately) and 2. Your Twitter handle (even if you had submitted in the past. It really helps me out!) Past posts and future hosts can be found on our blog carnival index page.