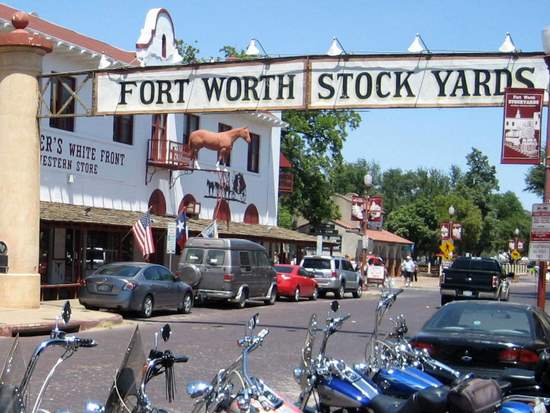 The Fort Worth Texas Stockyards: Where the West Begins

The Fort Worth Stockyards: Where the West Begins

For those craving a wild west experience in north Texas, the Fort Worth Stockyards is the place to go. This is where you can ride a mechanical bull, watch a gunfight reenactment, buy custom-made cowboy boots, hang out in a honkytonk, see the opry, witness a cattledrive, rent a horse, or head to the rodeo.

Fort Worth is often referred to as, “Where the West begins,” and not simply because it sits a good 35 miles west of Dallas. Unlike the Big D, Fort Worth unabashedly embraces its cowboy roots, carrying its wild west atmosphere straight into the 21st century. Nowhere is this influence more apparent than in the part of town known as The Stockyards.

History of the Fort Worth Stockyards

Shortly after the Civil War, Fort Worth became a popular pit stop for cowboys driving their cattle up through Texas. These “drovers” as the men were called, often stopped in Fort Worth for supplies. The city became so popular with cattlemen that they christened it “Cowtown,” an affectionate nickname that endures to this day.
Up until the mid-1950’s, the Fort Worth Stockyards was a major hub for the livestock industry, a place where cattle, pigs and sheep were bought, sold and slaughtered. For many years, it was the biggest livestock market south of Kansas City.

While the only cattle for sale here these days is in the form of hearty steaks and ribs, the Fort Worth Stockyards remain vital to the city’s economic well-being. In 1976, the Fort Worth Stockyards was added to the National Register of Historic Places. This special designation helps preserve the wild west flavor within a 98 acre range downtown.
One can only imagine how the stockyards smelled in its heyday – or would that be, “hay day,” in this case? These days you are more likely to smell BBQ than manure as you stroll through this part of town. The holding pens and slaughter houses have morphed into western themed shops, art galleries, and even a winery.

In April of 2011, the original stables reopened, making it possible once more to board horses here, or rent one for an afternoon ride along the Trinity River.

The Fort Worth Stockyards is studded with restaurants, too, mostly Tex Mex and BBQ joints, although one of my favorite middle eastern restaurants, Byblos, is nearby, too.

The livestock market may be gone, but the cattle drive lives on. Twice each day, (at 11:00 a.m. and 4:30 p.m.) Fort Worth’s city herd of 15 longhorns saunters down East Exchange Avenue, right in front of the Livestock Exchange Building.
There are lots of places to watch the daily cattle drives. You can simply stand on the sidewalk, or the lawn in front of the Livestock Exchange Building.

If you want to take pictures, find a section of sidewalk where there isn’t a big car or SUV in front of you because people are not allowed in the street. I stepped into the street with my camera and was quickly herded back onto the sidewalk with the rest of my species!

If your heart isn’t set on snapping photos, then sitting at any restaurant with outdoor seating along East Exchange Avenue is also a fun way to enjoy this twice daily event.

Some words of advice: Be on time! Longhorn cattle are not slow pokes. These steer were bred for walking all day long, so a short jaunt down the street only takes them a few minutes.

You can visit these longhorns in their corral behind the Livestock Exchange Building before and after the daily cattle drives. While there, keep an eye out for drovers, dressed in 19th century garb, who are happy to pose for pictures with you and answer questions about life in the old west.

Watch the Summer Gunfight Shows in Fort Worth

Fans of westerns and cowboy-wannabes of all ages will enjoy the gunfights which take place on weekends throughout the summer. A group of actors called the Legends of Texas give a free, family-friendly show twice a day each Saturday and Sunday starting Memorial Day weekend and continuing through Labor Day weekend.

These choreographed wild west gunfights are quite fun, and the actors will pose for photos with you and your family afterwards. If loud noises bother you, you might want to wear earplugs, since a few shots are fired. The shots are blanks, of course, since as the marshall for the Legends of Texas explains, “We need to re-use our bad guys.”

Daily Cattledrive Schedule:
The daily cattledrives are free to the public. Twice each day (except for Easter Sunday, Thanksgiving, and Christmas Day) at 11:30 a.m. and 4:00 p.m., the city’s herd walks down East Exchange Avenue, Fort Worth, TX 76164.

Hours:
Hours of operation vary among the many shops, restaurants and other venues in this area. Honkytonks and bars are open late, for instance, but the majority of things are up and running during regular business hours.

Admission:
The Fort Worth Stockyards is a free attraction, as are the cattledrives and gunfight shows.

Parking:
While there are free parking spots, on extra busy days, you may have to pay for parking in one of the official lots, which runs $2.00 per hour, or $5.00 for the whole day.

Address:
Simply head on down to East Exchange Avenue, Fort Worth, TX 76164 and start wandering.

Please note: While all the above information is accurate as of this writing, hours, prices and so forth are subject to change.