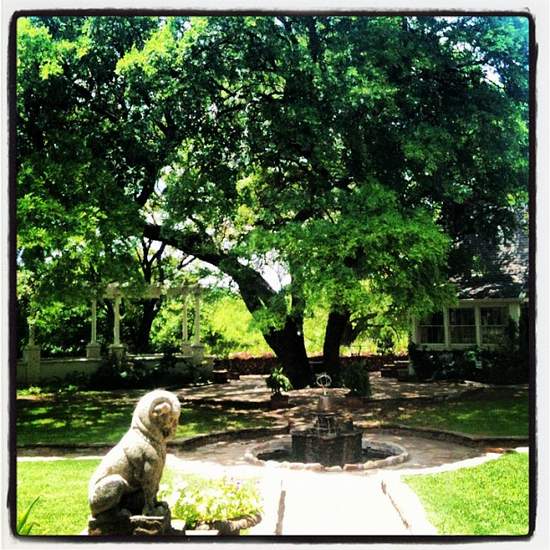 Twenty-five miles west of Fort Worth lies a beautifully landscaped garden in the Historic District of Weatherford, Texas. This lush oasis was created by the internationally renowned portrait artist, Douglas Chandor, and his wife, Ina.

Chandor Gardens is such an unspoiled treasure that, I must confess, part of me selfishly wanted to keep it as my own little secret garden rather than write up this iPhone photo essay.

At any rate, while researching this article, I discovered that the historical romance author, Caroline Clemmons, recently blogged about this site, too. Check out her post entitled, A Visit to Chandor Gardens, Weatherford, Texas for even more information and photos.

A Petite, but Charming Garden

At a mere four acres, Chandor Gardens can hardly compete with the likes of the 66 acre Dallas Arboretum or the 109 acre Fort Worth Botanic Gardens, but this is part of its charm.

After all, even in Texas, bigger isn’t always better.

It’s so well-planned that each little section of the garden offers visitors a surprising amount of privacy. There are plenty of nooks and crannies perfect for stealing a kiss from your sweetheart as you wander along the pathways.

Douglas Chandor called his gardens in Weatherford a form of, “living art.” It really does feel like you are walking through a landscape painting at times. In some places it even feels as though you have stepped into an illustration for Alice in Wonderland!

The landscaping is a mixture of traditional English style gardens, with Asian influences. Some of my favorite features include the koi pond, the 30 foot waterfall and the bronze sea dragon fountain.

Who was Douglas Chandor?

Douglas Chandor was born in Surrey, England in 1897. He began his career as a soldier, however, not an artist. In 1918, while recovering from illness and injuries sustained during WWI, Chandor rediscovered his childhood love of painting.

He must have been a quick study, because within a year, Chandor began receiving prestigious portrait commissions. One thing led to another, and in 1921 he completed a portrait of the Prince of Wales which officially launched his career.

His portrait career was extremely successful and included such notable figures as Queen Elizabeth II, President Franklin Roosevelt, Joseph Stalin and Prime Minister Winston Churchill (who was quite an artist in his own right.)

So if Chandor was British, how the heck did he wind up in Weatherford, Texas? Well, just like me, he landed in the Lone Star State because he fell in love with a Texan.

In Chandor’s case, he divorced his first wife in 1932. Two years later, he married Ina Kuteman Hill. I’m not sure where the pair met, but Ms. Hill hailed from Weatherford, which is why the couple opted to spend half of the year in her family’s north Texas mansion and the other half in New York City. (Let’s hope they chose the summer months to migrate north, because it gets mighty hot down here then.)

Soon after marrying, Douglas and Ina Chandor began an ambitious landscaping project they called, “White Shadows Garden.” From the years 1936 until 1952, the pair transformed the barren yard of their estate into intricate gardens.

After Mr. Chandor’s death in 1953, his widow renamed the place, “Chandor Gardens,” in his honor and opened them to the public to defray the cost of upkeep.

This arrangement worked well enough until Ina Chandor’s death in 1978. With no heirs to maintain their project, the once magnificent gardens slowly deteriorated and the estate sat empty.

Fortunately, in 1995 Charles and Melody Bradford bought the site and began the slow, steady process of restoring the site to its former glory. In 2002, the city of Weatherford purchased Chandor Gardens from the Bradfords and opened it to the public once again.

Chandor Gardens is available for weddings and garden parties. People can rent the garden, the mansion, or both for private functions. Imagine what a whimsical garden party you could host there!

On my first visit, my husband and I arrived at the tail end of a wedding reception. Watching little kids play hide and seek in their Sunday best only added to the atmosphere.

On my most recent visit, my husband turned into a tiny frog when I kissed him beneath the water fall. As you can see in the photo above, he was so small he could sit inside his own wedding band. After a few tense moments, I remembered the proper words to recite as I ever-so-carefully kissed him again, and he turned back into my handsome prince. Phew!

If you ever get the chance to visit Chandor Gardens in Weatherford, Texas, I’m sure you will have a delightful time.

Admission
Adults and kids 13 and up: $5.00
Children 12 and Under: Free (Must be accompanied by a paying adult)

PLEASE NOTE: While all the above information is accurate as of this writing, hours, prices and so forth are subject to change.