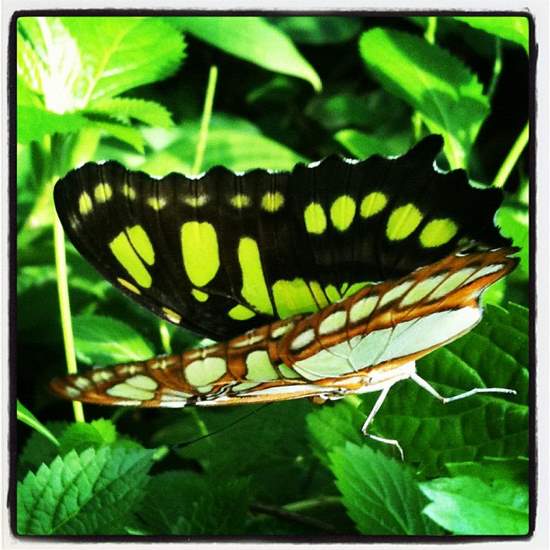 Texas Photo Essay: Butterflies at the Fort Worth Botanic Garden

Butterflies in the Garden in Fort Worth, Texas

Every spring, the Fort Worth Botanic Garden in Fort Worth, Texas hosts a “Butterflies in the Garden” exhibit. Over a two-month period, cocoons are sent in from all over the world.

During its run, employees add over 2,000 newly-hatched butterflies to the exhibit – every single week. That adds up to a *lot* of lepidoptera, y’all! (I’m not trying to be fancy, I just didn’t want to keep using the word, “butterfly,” over and over.)

This is one exhibit that is definitely worth catching the tale end of, if you can arrange it. By then, the conservatory is swarming with color. Butterflies are everywhere, and just because the humans are forbidden from touching them, doesn’t keep the butterflies from landing on visitors. Usually, they only stay a moment, but sometimes they decide to park themselves on you.

Speaking of humans, most of the ones I’ve met have a disdain for insects. Here in the Lone Star State, this disdain is even more apparent. I don’t know how many times I’ve heard a Texan proclaim, “I hate bugs!” (They tend to call them bugs down here, I’ve noticed.)

Thank goodness for butterflies. They are the gateway creature for insect appreciation.

I can’t imagine any other circumstance in which I would see a bunch of Texans walking around, grinning with delight at the sight of a room chock full of bugs. (Texans have a real unique way of saying, “bugs,” too. When they’re really disgusted, they stretch it into a two-syllable word. It’s a little-known Texan super power.)

The way people moon over butterflies makes me think there must be a shred of truth to my snake theory.

What’s my snake theory, you ask? Why, I’d be happy to lay it out for you, gentle reader. You see, like insects, a lot of people find snakes creepy.

However… just think how different people would react to snakes if – instead of scales – they were covered in feathers, or better yet, soft fur. Let’s make that soft, bunny fur.

Furry snakes? You know people would love them! I can just see it now: Instead of carrying chihuahuas in their purses, socialites would wear beautiful, furry snakes around their necks.

It’s the same with butterflies. If they weren’t so dang colorful, people would have the same disdain for them as they do the rest of the Insect Kingdom.

Not to mention the whole, “Garden of Eden,” debacle. Talk about bad press! I think it’s about time the reptiles of the world hired themselves a new PR agent.

Back to the Butterflies…

One thing I love about the Fort Worth Botanic Garden’s conservatory is that it is so lush that visitors blend into the surroundings. It makes people seem like part of the exhibit, too.

Kinda reminds you that – hey, we’re part of nature, too! I like that feeling.

The butterfly exhibit is also super humid, which is a feeling I don’t particularly like, but at least the staff keeps hair dryers at regular intervals throughout the show so that the lepidoptera paparazzi can de-fog their lenses. (It was tempting to give my limp bangs a blast, too, but I restrained myself.)

Did I mention that I love Instagr.am?

Oh, in case you’re wondering why all these photos are square, it’s because I snapped them with my iPhone camera and used Instagr.am (my favorite app of all time) to post a ton of photos to Twitter and Facebook during my visit.

One thing running through my head during my visit to the Fort Worth Botanic Garden’s butterfly exhibit was the book I read aloud to my husband on our recent roadtrip to New York.

Winged Obsession is the true life tale of the dedicated undercover work it took to catch a notorious butterfly smuggler. It’s both entertaining and educational and reads like a fast-paced mystery novel.

We got so caught up in the plot that even though it was 1:00 a.m. by the time we finally arrived at his mom’s house, I just had to stay up and read the final chapter to us in bed before we could sleep that night.

Anyway, the book also made me even more aware of how much hard work goes into protecting wildlife. I should also add that I have a relative who is a Special Agent for the Fish and Wildlife Agency, so reading the book gave me a deeper appreciation for his job.

Well, I hope you enjoyed my playful photo essay on butterflies, Texan drawls and my furry snake theory. Feel free to toss your 2 cents into the comments section. I love getting comments!