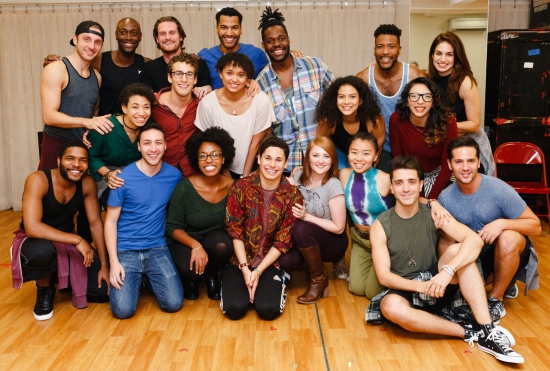 Opening Night Ovation for RENT: Feels like a Party!

Opening night for RENT 20th Anniversary Tour in Dallas ended with a cheering crowd and a standing ovation. This much-lauded and multi-award-winning show with book, music and lyrics by Jonathan Larson plays through October 2nd at the AT&T Performing Arts Center as part of its 2016 – 2017 Broadway Series.

It was obvious by the crowd’s cheers and anticipatory applause throughout the show that a good portion of the opening night crowd had not only seen RENT before, but they were very familiar with it. It felt like a party!

Set in the 1990’s, RENT follows the lives of seven aspiring creatives throughout a single tumultuous year as they struggle between making a living and making a life for themselves in New York City. Along the way, the characters are confronted with homophobia, class disparity, drug addiction, and what it means to succeed without selling out.

Inspired by an opera

Although inspired by Giacomo Puccini’s opera La Bohème, much of the storyline in RENT is autobiographical. Playwright Jonathan Larson’s best friend growing up was gay, for instance, while Larson dated a fickle dancer who eventually left him for a woman.

RENT 20th Anniversary Tour features a talented, energetic, and youthful cast, for whom the 1990’s must feel so very far away! David Merino who plays Angel, is charismatic and amazing from the moment he struts onto the stage. I especially loved his moves and whoops a la Prince during the lively “Today 4 U” number.

While the entire ensemble has strong voices, Aaron Harrington’s lush baritone blew me away.  I could listen to him sing all day. Speaking of vocals, the solo in “Seasons of Love” gave me some serious chills!

RENT’s choreography is varied and imaginative throughout, but I especially loved the “Tango: Maureen.” The show’s dance moves often add a bit of witty subtext to the vocals, such as in the playfully seductive “Light My Candle” song and dance, featuring Kaleb Wells as Roger and Skyler Volpe as Mimi.

Follow the the #Rent20 Tour site and social media:

RENT 20th Anniversary Tour in Dallas plays through October 2nd, so grab your tickets while you can. After all, there’s no day but today!

The world has been robbed

It’s such a shame that Jonathan Larson,  who wrote the book, music and lyrics for RENT, unexpectedly died of an undiagnosed heart condition on the day of RENT’s preview performance 20 years ago! Aside from the obvious grief this caused his friends and family, the entire world has been robbed of knowing what else he would have given us through his creativity.
To learn more about Jonathan Larson and the background behind RENT, check out this documentary on YouTube: No Day but Today: Rent

RENT 20th Anniversary Tour in Dallas plays through October 2nd, so grab your tickets while you can. After all, there’s no day but today!

What: RENT 20TH ANNIVERSARY TOUR
When: Now through October 2, 2016 in Dallas, TX

FREE WEEKLY NEWSLETTER: For updates on my offbeat travels, books, music & other fun stuff (such as postcards from the road!) subscribe to my newsletter using the form below.  You can also mix & mingle with me by clicking this link & “liking” my Facebook Author Page:

Curious about my books & music?