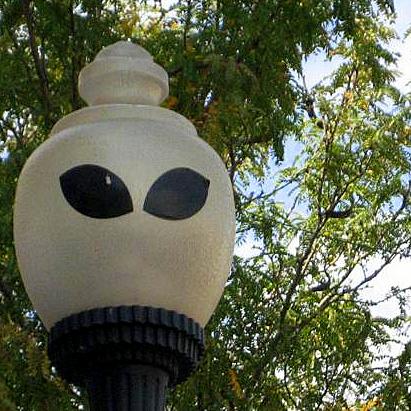 I didn’t spot any UFOS in the sky, but shop windows and signs featured aliens galore:

For those who don’t know, Roswell’s main claim to fame is that in 1947 a flying saucer allegedly crashed nearby. Newscasts reported that locals were involved in retrieving debris from the mangled spaceship and in conducting an autopsy on a dead alien. The United States Air Force quickly recanted these claims, however, stating that it was actually remnants of a weather balloon and nothing more.

Even so, books, movies, TV shows, and a slew of deathbed confessions by people claiming to have been hushed by the US government keep this local legend alive. One could say that the Roswell Incident is the original X File. (Then again, here in Texas we have the famous Aurora Space Crash & Alien Grave, which pre-dates Roswell by a full 50 years!)

Nowadays, the little town of Roswell, New Mexico remains synonymous with the concept of space aliens and government cover-ups, so I was curious to swing by and see how this manifested in the local culture.

As we cruised down Roswell’s main drag, one thing became quite clear: the locals were having fun with the whole UFO thing. As you can see from the photos I snapped as we whizzed by, the KFC, Wal-Mart, and even the local credit union all have an alien theme. (The local IHOP missed their chance to rebrand as the Intergalactic House of Pancakes, but every crowd has a stick in the mud.)

The main concentration of alien-oriented shops and sights is in the older section of town where people have set up UFO themed shops near the Roswell UFO Museum. While the museum is quite interesting, and seems well-researched, it’s obvious that the displays are the result of a labor of love more than an abundance of cash.

In fact, what I find endearing about Roswell is the grassroots way in which alien lore permeates the town. Sure, there are tons of T-shirts, pencils, coffee mugs and other souvenirs for sale, but there is nothing slick about it. Even the window displays depicting poker playing grays and alien autopsies have a decidedly homegrown feel.

Nothing anomalous happened during our visit, although on the way out of town we stopped by a restaurant called Tia Juana’s (which is what led to startling discovery number two.)

We chose Tia Juana’s because it looked family-run and the parking lot was full. It was a good choice. For starters, the place serves homemade tortilla chips, sopapillas, and tortillas. Everything we had was spicy, yet full-flavored. I would dine there again in a flash. In fact, if I lived nearby, I would surely have many instances of missing time attributed to long lunches there.

We left Roswell with full bellies and satisfied taste buds. And even though the long stretches of highway made me daydream about whether or not our planet has ever been visited by extraterrestrials, one thing is for certain: the food at Tia Juana’s in Roswell, New Mexico is out of this world.