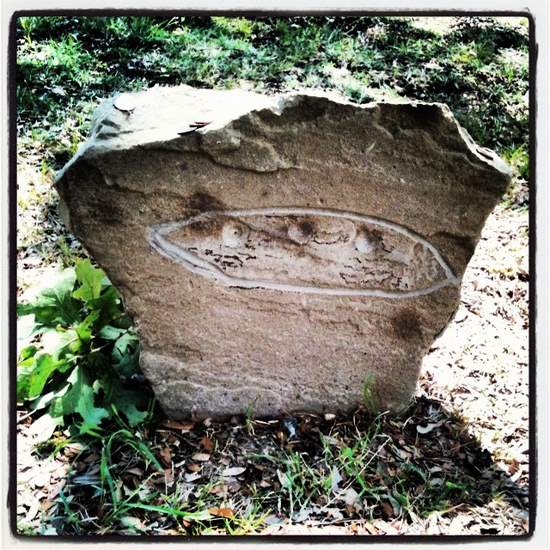 The following is an adapted excerpt from Unexpected Texas

– my best-selling travel guide to quirky, offbeat and overlooked places near Dallas and Fort Worth. Check it out if you enjoy learning quirky facts, or are looking for offbeat road trip ideas in north Texas.

Back in 2012, I learned of a strange incident that allegedly occurred in Aurora, Texas. According to a newspaper article published by the Dallas News in April of 1897, a cigar-shaped object crashed in a farmer’s field, an alien body was found in the debris, and this little humanoid was buried in the local cemetery.

There’s even a Texas State Historical Marker at the site describing the strange event!

To see a 5-minute video I created about this incident, visit my YouTube channel below:

When I first visited Aurora Cemetery in June of 2012, it was easy to find where the Texas settlers buried the body of the alleged space alien, as you can see in the photo at the top of this post.

When I returned in March of 2013, however, the headstone was missing! All I found in its place was a rock the size of a baseball and some plastic flowers, as you can see in the photo above.

The Roswell incident is arguably the most well-known case in UFO history, yet here in Texas, there exists an alleged spaceship crash – complete with an alien body – which took place 50 years earlier! I was pretty excited to find out that I live a hop, skip and jump from Roswell’s Texan equivalent.

A spaceship crash with an alien body in north Texas?

As the story goes, in the early morning hours of April 17, 1897 something crash-landed in the north Texas town of Aurora. According to a newspaper article which appeared in the April 19th edition of the Dallas News, a mysterious cigar-shaped airship ran into a windmill, spread debris across several acres and – strangest of all – a small humanoid body was discovered in the wreck. According to the reporter, although the petite alien was, “not an inhabitant of this world,” his or her body was later buried at the local cemetery.

The Dallas News Article about the Mysterious Airship Crash in Aurora, Texas

Here’s a link to a scan of the original article, and here’s what the reporter claims:
“About 6 o’clock this morning the early risers of Aurora were astonished at the sudden appearance of the airship which has been sailing around the country. It was traveling due north and much nearer the earth than before.

What happened after the Spaceship Crash in Aurora Texas?

These days, with over 1800 graves, the Aurora Cemetery claims more inhabitants than the little town itself, with its current population of 376. In the late 1800’s, however, Aurora was poised to make it big. Its population boomed to nearly 3000 residents, making it one of the largest cities in Wise County. Sadly, a spotted fever epidemic killed hundreds of residents, the cotton crop failed and the railroad decided to pass the town by.

Given the mindset of the era and the challenges they faced, it’s not surprising that instead of studying the alien’s body for science, the town buried the creature and moved on with their lives.

No reportage exists regarding the actual funeral ceremony, although a headstone was placed at the gravesite. According to photos and verbal accounts, this headstone depicted a crudely carved cigar-shaped object with portholes in the side.

As for the townsfolk of Aurora, they had enough going on with epidemics, crop failure and being slighted by the railroad to worry about the mysterious alien’s origins.

Can you blame them?

The entire incident faded into the background as the once-booming town of Aurora withered into near oblivion. Then, in 1973, a United Press International blurb mentioned that incident.

I find this part of the story quite strange, personally. Why did the story suddenly resurface?

Why 1973? (UPDATE: Check out my recent interview on Coast to Coast AM radio to find out more details about what transpired in Aurora in 1973!)

I have no idea! Whatever the reason, this little article created so much interest in the old story that local police guarded the alien grave day and night. Sadly, the night they quit this vigil, someone stole the original headstone for the space creature. There was even a push to exhume the alien’s body, but the cemetery association declined.

Many people believe the Aurora alien spaceship crash to be a complete hoax.
Their main complaints with the scenario are:

1. There was no windmill on Judge Proctor’s land.

1. The History Channel found evidence of a windmill (actually a “windlass” that was mis-reported as a windmill) on Judge Proctor’s land.

2. They found a well at this site, too. The well was capped in the 1950’s because the owner thought it was contaminated by the alien debris. the History Channel convinced the current owner to let them uncap it and test the water.

3. Melted metal has been found in the alleged crash site area. This metal is not some unearthly element. It’s aluminum. While aluminum seems commonplace to us now, it was actually quite rare in the late 1800’s.

4. The History Channel also found, via ground-penetrating radar, a casket-shaped item in the exact spot where the alien is allegedly buried.

5. The Roswell crash debris was taken to Fort Worth, which is quite near Aurora.

6. The town of Aurora is set up like a military base. (I’m not sure what people mean by this, but I did notice a street called, “Base,” or something like that. I will have to look into this claim more.)

There isn’t an official street address for Aurora Cemetery, but it’s not hard to find. If you have a GPS, set it for: Cemetery Rd, Aurora, TX 76078. If not, head towards Rhome, Texas on US 81/287. Exit onto Highway 114, drive roughly 1.5 miles then turn onto Cemetery Road. The cemetery will be on your lefthand side.

My thoughts on the Aurora, Texas Alien crash site

While I don’t think there is conclusive proof that an alien being crashed a UFO in north Texas, I do think something unusual happened in Aurora back in April of 1897.

Sadly, it is such a cold case that we may never know the truth.

I wish the Aurora Cemetery would let a respected investigation group exhume the alien’s coffin and see what is in there. The cemetery board very nearly dug up the mysterious grave back in 1973, but since Texas State law requires the next of kin to be notified before an exhumation, they ran into a brick wall.

While researching this strange story, I came across a rash of, “mysterious cigar-shaped airship” sightings in 1896 and 1897. These UFOs were spotted all over the USA, but especially in Texas. Some of the accounts are downright ridiculous. (In one, the aliens reportedly sang religious hymns and had a barbecue.) Many others, however, are much more believable.

Perhaps what makes the Aurora incident so enduring is that – even if it is just a tall Texan tale – its details dance along the edge of possibility without plunging overboard into the utterly implausible. While frustrating from a scientific perspective, it’s good advice for storytellers.

Do you have questions about symbols you’ve seen on headstones? Drop by Exploring Historic Cemeteries on Facebook and let me know! And tune in to my 30-minute historic cemetery podcast on the first Tuesday of each month: Tombstone Tuesday with Tui Snider.