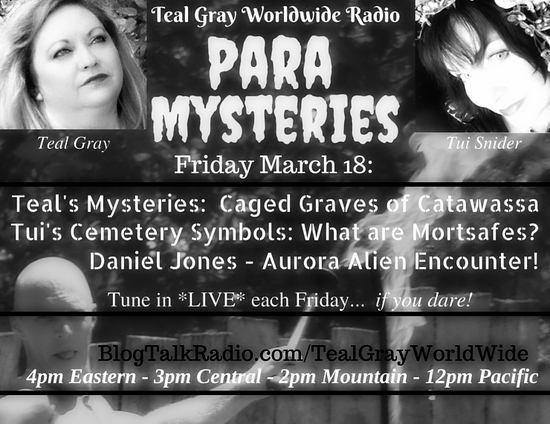 Historic Cemetery Symbol of the Week

This week’s Historic Cemetery Symbol post is about mortsafes and Resurrectionists. The topic was inspired by my friend, Teal Gray, when she told me about the mysterious Caged Graves of Catawassa.

In fact, Teal and I will be discussing everything in this post during a one-hour radio show, as you can see in the graphic below:

Historic Cemeteries: Who were the Resurrectionists?

These days, people often make arrangements to donate their body to science after they pass away. We accept the fact that medical students need cadavers to learn about human anatomy. But this was not always the case.

Up until the mid-1800’s, the only way for medical students to get practice cadavers was to steal them from graveyards!

To discourage Resurrectionists, the UK passed a law in 1752 called the Murder Act, which allowed medical researchers to use the bodies of executed criminals for educational dissection.

You’d think this would meet the demand of scientists for study cadavers, but it did not! So despite these legal concessions, Resurrectionists were still in high demand.

As you can imagine, no one wanted the body of their beloved family members snatched away by Resurrectionists. To combat this, elaborate metal cages, called mortsafes, were placed over graves by those who could afford them.

Such mortsafes first appeared in Scotland in the early 1800’s. Why Scotland? Because Edinburgh featured several prominent medical universities.

Mortsafes were often rented by the family from either the church or the cemetery for a certain period of time, after which the cage would be removed and used by another grieving family. Since mortsafes were not meant to be permanent structures, very few remain standing today. Medical students need fresh cadavers for their studies, so the Resurrectionists only targeted the newly buried.

After 6 weeks or so, a mortsafe could be removed from the grave. That way, the family could then tend the grass and keep the headstone clean without a heavy metal cage getting in the way.

Finally, in 1830 the UK passed the Warburton Anatomy Act. This law added even more provisions for legally obtaining medical cadavers, such as using suicide victims and unclaimed or unidentified bodies. Many of these came from prisons and workhouses, and apparently this provided enough bodies to meet the demand. This legislation effectively put an end to the need for mortsafes and the grisly practice of body snatching for medical students.

Mortsafes in the USA?

From my research so far, it does not appear that mortsafes were used much, if at all, in the USA. There certainly were Resurrectionists here, however, and people did worry about body snatching, but it does not seem to have been as big of a problem in America as it was in England and Scotland in the 1800’s.

The closest I’ve seen to American mortsafes are drawings for elaborate burglar-proof coffins and mausoleums. Some of these patented coffins use explosives to deter Resurrectionists!

So when my friend and radio show co-host Teal Gray told me about two graves in Pennsylvania that feature elaborate metal cages on top of them, I was very curious. As I said earlier, mortsafes were not mean to be permanent structures, so it’s odd that these graves still have them.

In fact, in this particular case, some speculate that the metal cages were placed there to keep dead inside the graves rather than to keep the living out!

I can hardly wait to hear all the details Teal Gray has to share with us about this on our upcoming show! (You can tune in live or catch the replay by visiting this link: Para Mysteries with Teal Gray Worldwide Radio)

These mysterious “hooded graves,” as locals call them, have even inspired a historical novel by Dianne K. Salerno called The Caged Graves. (Looks like an interesting book!)

Teal Gray will be sharing her research into the Caged Graves of Catawassa, Pennsylvania on a brand new weekly radio show we are calling Para Mysteries. Para Mysteries is a weekly one-hour show where Teal and I will have fun sharing the strange tidbits we run into during our travel and research.

As you probably guessed, I will be discussing mortsafes and Resurrectionists on the show! To learn more about mortsafes and see photos of some of the few remaining, check out the link below:

Our first guest for this new Para Mysteries show is Daniel Jones of VORTEXAS. Daniel will tell us about the exciting event he organized called the Aurora Alien Encounter, a one-day expo commemorating the April 17, 1897 UFO crash in Aurora, Texas, after which an alien body was recovered and buried in the local cemetery.

If you’re fascinated by bizarre history and/or UFOs, you won’t want to miss this conference on Saturday, April 16, 2016. It takes places at the MD Resort in Aurora, Texas and includes featured speakers, lunch, vendors, a documentary, and shuttle tours to the original crash and burial sites!

The keynote speaker for the Aurora Alien Encounter is none other than Travis Walton. If the name doesn’t ring a bell, then check out the movie “Fire in the Sky.” This major motion picture was based on Travis Walton’s UFO abduction! There is also a book about the Walton’s terrifying UFO experience that is also called, Fire in the Sky.

I’m super thrilled and honored to be speaking at the Aurora Alien Encounter! Other speakers include Jim Marrs, who is truly an expert on the Aurora UFO incident, as well as Nick Redfern, Noe Torres, Ken Cherry and other special guests (TBA)!

I am currently writing a field guide to historic cemetery symbolism. Each week, I share a small snippet from my upcoming book. It’s my goal to create a handy-dandy pocket guide for taphophiles, genealogists, ghost hunters, and anyone else interested in the historic graveyard symbols that have become forgotten over the years.

Let me know in the comments if there is a certain cemetery symbol that you are curious about. Also, if you would like to know when the cemetery symbolism guide is available for purchase, scroll down and sign up for my newsletter! I look forward to hearing from you!