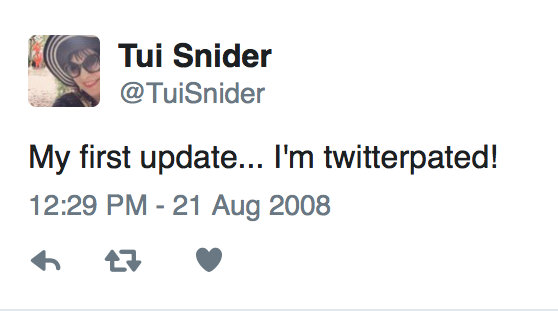 You just never know… (well, eventually you do!)

February’s IWSG post about dealing with jealousy was rather long-winded, so I’ll try to keep this one short. The main thing I’d like to share with other writers this month is that:

You just never know where things will lead!

Take Twitter. When I posted my first tweet (as seen above) I had no idea where it would lead. (To find *your* first tweet: click here.) Eight years and some 34,000 tweets later…I have had so many opportunities, both directly and indirectly, come my way simply by tweeting. I’ve gotten paid writing gigs, magazine articles, conference invitations, radio interviews, and speaking engagements simply from tweeting on a regular basis.

The funny thing is, I never expected such things from Twitter!

I stay for the friendships – everything else is gravy!

Personally, the main value I derive from Twitter is all the wonderful friendships and writing camaraderie it offers. It’s great for research, and I love participating in hashtags such as #MondayBlogs, #AZchat, and #ttot. I’m also a big fan of Twitter chats, especially on Thursday. But all in all, it’s the friendships that keep me coming back.

So, y’know how I mentioned that among other things, my tweets have led to speaking engagements? I’ve got one coming up in a couple of days, and yes, it’s thanks to connections I made through Twitter! I’ve been invited to give a talk in San Antonio for the Conference of College Teachers of English (CCTE.)

And here’s the kicker: They’ve invited me to speak about Twitter! More specifically, I’m speaking at the State of the Profession Breakfast Banquet and my topic is “The Use of Twitter in Your Professional Life.”

I’m so honored and excited!

Even though this is the first time I’ve given an official talk about Twitter, I have given many unofficial talks on the subject. At various book conferences and expos, basically any time I’ve set up a table to sell books, there’s always a moment when no customers are around and all the writers start talking shop.

Inevitably, the topic turns to Twitter. Nine times out of ten, the other writers will say that they tried Twitter, but gave up because it was just overwhelming and seemed pointless. That’s when I break it down and explain my top tips for getting the most out of Twitter.

As I gathered my notes and prepared a slide presentation for the CCTE talk, I realized that even though it’s second nature me now, there’s actually a lot to using Twitter if you want to be more than just a casual user. It’s been a struggle to distill it down into a 30 minute talk!

In fact, I gave up! Well, I didn’t give up on the talk, I just gave up on thinking I could squeeze everything into a half an hour.

Instead, I’m using all my notes to create a book on the topic, a book of writing-specific Twitter tips. For a book, it will be short and sweet, and I’ll sell it for 99 cents. Next time I’m selling books at a conference or whatever, I can give that book to the other authors rather than barraging them with tips!

Speaking of writing, friendships, and Twitter: Thursday nights are chock full of Twitter chats for writers. If you’re on Twitter, I hope you’ll drop by sometime and join in the fun.

Dubbed “Thursday Night Writes” by Michael Simko (@MichaelSimko1) this lively night of writing chats kick off at 8pm Eastern time with #StoryDam chat. I’ve been moderating for a few years now, and I love it! To learn more about #StoryDam, check out the StoryDam.com website and follow @StoryDam on Twitter.

After #StoryDam, several other writing chats kick in, including #10MinNovelists and #K8chat. Katharine Grubb leads is a prolific author and mother of five, while Kate is a cat-loving author’s assistant.

So that’s my IWSG post for March! I’m currently on a road trip, but I’ll do my best to reply to comments and visit your blogs each night along the way (motel wifi willing!)

So here I am, 8 years and 34K tweets later, and I’m *still* twitterpated with Twitter!  But how about you? Do you use Twitter? As a writer, have you found it helpful?

What is IWSG, anyway?

IWSG stands for “Insecure Writers Support Group.” It’s a monthly check-in for writers of all stripes. Its creator, Alex J. Cavanaugh, describes ISWG like this:
“Purpose of IWSG: To share and encourage. Writers can express doubts and concerns without fear of appearing foolish or weak. Those who have been through the fire can offer assistance and guidance. It’s a safe haven for insecure writers of all kinds!” – Alex J. Cavanaugh