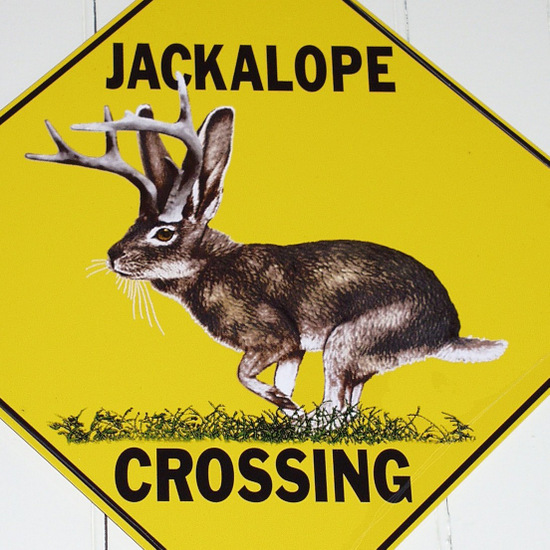 I rarely have guest posts, but here you go! I’ve been so busy getting my quirky Texas travel guide together that I asked the prolific traveler/photographer and all-around nice guy, David “Sumoflam” Kravetz if he could put together a Jackalope photo essay. I hope you enjoy it:

So, you are a fan of the Jackalope? Having traveled all over the country I have seen my share of Jackalopes…you know, the furry rabbit looking creatures with antelope (and sometimes deer) antlers! My first inkling of one of these was on a postcard I saw many years ago of a woman riding one.

As I began traveling the country, especially in the west, I would come across examples of Jackalopes. Most of them featured only a head. Further, I began noticing them at many famous highway stops, including several Bowlin “Resorts” in southern Arizona and New Mexico. These sightings prompted further research: Where did these unique creatures come from? Have any “live” ones been seen before?

How the Jackalope legend began

Well, legend has it that the first Jackalope was spotted in February 1829 near the area where Douglas, Wyoming currently sits. Explorer John Colter, a member of the Lewis and Clark Expedition and one of the first white men to ever set foot in what would later become Wyoming, claimed to see a Jackalope. He was scoffed at over many of his sightings including those of the amazing geysers and bubbling mud pits of Yellowstone.

Jackalope Capital of the World

Douglas is now officially known as “the Jackalope Capital” of the world and is the home to a number of “Jackalope monuments” as well as hundreds of mounted Jackalope heads. But “rabbits with horns” have been noted as far back as 700 AD when the Buddha mentions them in the Surangama Sutra. There is also the legendary “wolpertinger” of Bavaria (a variation with both antlers AND wings – an common in the World of WarCraft); the flying Skvader of Sweden (a flying, hornless hare) and the Lepus Cornutus of Saxony as noted in Conrad Gessner’s Historiae animalium (published in Zurich in 1551). (see the interesting Wikipedia article about this: Lepus Cornutus)

Perhaps the first real know “mounting” of a jackalope head probably came in the 1930s when two taxidermist brothers named Ralph and Douglas Herrick (from Douglas, WY) were hunting jack rabbits in 1932 and bagged a couple. They threw one on the floor and it slid right up against a pair of deer antlers. According to a New York Times article back then, Ralph said “It looked like that rabbit had horns on it.” Shortly thereafter, the Herricks began mass producing them, shipping hundreds to Wall Drug.

Because there are so many jackalope in the high deserts of Wyoming near Douglas, this is the only place in the country you allowed to hunt them. Indeed, you can get a jackalope hunting license as long as you can prove that you have an IQ below 72. And the hunting season is very short….you can only hunt them on June 31 between midnight and 2 AM.

From what I can recall from my travels, there are only a few other locations in the country with giant Jackalope statues. One is on top of car dealership in Fort Worth, Texas; another is in Red Lodge, Montana; there are five in Douglas and then there is one in Wall Drug in South Dakota.

Unfortunately for me, I have never had the chance sighting of a live jackalope, though I have over 200 photos of big statues and mounted jackalope…indeed, when I see one, I capture it (via camera anyway). Happy hunting!!

About David “Sumoflam” Kravetz – Sumoflam is a “Collector of Places” and the author of the Less Beaten Paths blog about travel on the back roads of America to the offbeat, quirky, wild and wonderful places of America. Born in Cleveland, OH, David has lived in 8 US states and spent 6 years living and working in Japan. He has also spent time working in China, the Philippines and Canada.

Sumoflam has visited 47 of the U.S. states (just missing Maine, New Hampshire and Vermont) and has been through 6 Canadian provinces and has documented many of his travels to these locations. In the 1980s he was a tour guide working out of Flagstaff, Arizona and now continues to provide “tours” through his blog and other websites. He is the proud father of 5, and currently has 9 grandchildren, many of whom have accompanied him on his travels. His mantra in life is “Enjoy the Ride”