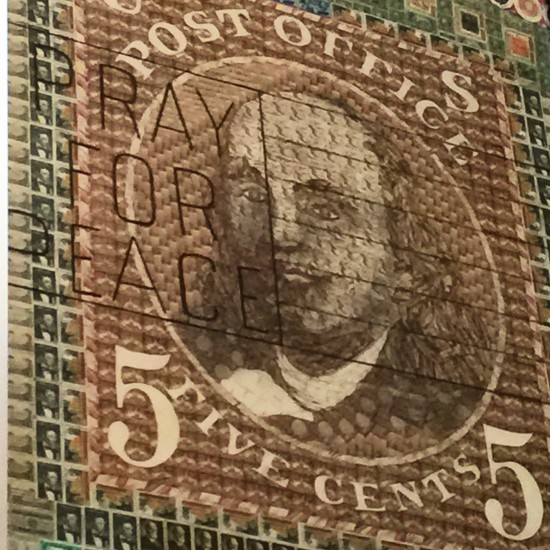 The following is an adapted excerpt from Unexpected Texas, my quirky travel guide to offbeat and overlooked day trips near Dallas and Fort Worth: Despite being named “Eastland” this quirky little town is actually located in west Texas. (Meanwhile, the city of West, Texas is located in the southern portion of our state. Go figure!)

Anyway, in the 1920’s Eastland was a lively boomtown thanks to the oil industry. These days, it’s a sleepy little city with a population hovering near 4,000. And unless you’re from this neck of the woods, you’re probably not aware of Eastland’s two most infamous characters: a horned lizard named Old Rip and the Santa Claus bank robber.

As fascinating as those two stories are (and believe me, I was fascinated enough to write a book about the Santa Claus lynching) what I’d like to tell you about today is an often overlooked gem in the heart of Eastland, Texas: a beautiful and one-of-a-kind postage stamp mural.

This unique work of art was created by Marene Johnson Johnson. (That’s not a typo, either; she really has two “Johnsons” in her name!) From 1955 through 1968, Marene Johnson Johnson served as Eastland’s first female Postmistress. I am not sure what inspired her to create this beautiful mural, or if she created any other works of art, but the display she created in Eastland is 10 feet tall by 6 feet wide and took her 7 years to complete.

Mrs. Johnson purchased $15,000 worth of stamps to create her masterpiece and used exactly 11,217 stamps. (I wonder who counted?) I’m not a stamp collector, but Johnson’s mural would certainly thrill any philatelist because it includes just about every stamp issued prior to its completion in 1963. In 1988, the stamps in the mural were estimated to be worth 5 million dollars!

As for its overall design, Johnson’s postage stamp mural depicts larger than life versions of the 5 cent Benjamin Franklin stamp, the 2 cent Abraham Lincoln stamp and the 1 cent Lady Liberty stamp. Other images created in this stamp-mosaic include a map of Texas, the emblem for the United Nations, and a border featuring red roses.

Signed by 6 US Presidents

At the time I visited the stamp mural, I didn’t realize that it had also been signed by six US Presidents. Although not all of them had yet held office, if you look closely at the photo below you can make out the signatures of: John F. Kennedy, Lyndon Baines Johnson, Harry S Truman, Richard Nixon, Dwight D. Eisenhower, and Herbert Hoover! Next time I visit I will look for more signatures because Johnson’s art work was also signed by Ladybird Johnson, several united nations ambassadors and various other political leaders.

I find it interesting, too, that Marene Johnson Johnson chose to include the “Pray for Peace” cancellation mark on her recreation of the Benjamin Franklin stamp at the top of the mural. Combined with all those signatures of ambassadors of the United Nations, I wonder if she was involved in the peace movement?

I would certainly like to learn a bit more about her life and inspirations. For one thing, it appears that Mrs. Johnson was extremely modest. So even though the mural was dedicated in 1963, I wonder how she reacted to the attention it must have brought her.

The reason I assume she is modest is because of her burial. Rather than be buried beside her husband, she chose to be buried at his feet. Why? From what I read, she felt her duty in life was to serve her husband and that, for whatever reason, she did not deserve to be buried alongside him!

Today you can view this one-of-a-kind piece of art for free simply by swinging by the Eastland, Texas Post Office. Just point your GPS to this address: Eastland Post Office, 411 W. Main Street, Eastland, TX 76488.