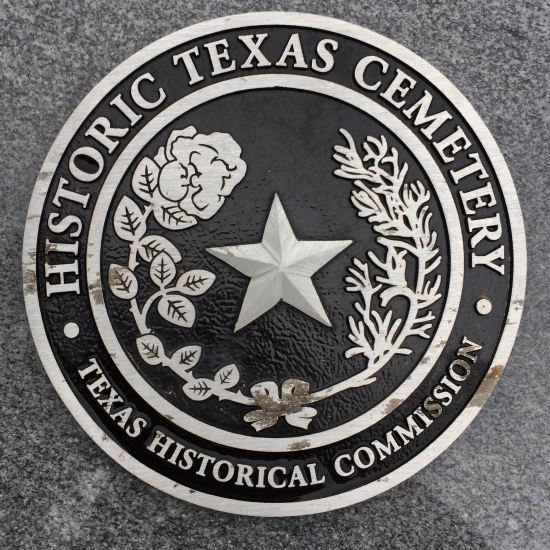 The following is an adapted excerpt from Unexpected Texas, my quirky travel guide to offbeat and overlooked day trips near Dallas and Fort Worth. I also feature Thurber Cemetery in my book of historic cemetery tales called 6 Feet Under Texas. Part of what makes it such an interesting place to explore is the unique history of the area, so here’s a brief overview:

More than a Smokestack

These days, Thurber’s 128-foot brick smokestack is the only thing most people notice as they whiz through this ghost town on their way to Abilene. It’s all that remains of the power plant which, in 1895, made Thurber, Texas one of the very first electrified cities in the USA.

Thurber’s history is fascinating. In the early 1900s its population neared 10,000, making it the largest city between Fort Worth and El Paso. While the population has currently dwindled to five, don’t let that fool you; this tiny burg offers a surprising amount of things to see, do, and even eat.

Thurber’s heyday ran from the late 1880’s through the mid-1930’s when it was a major bituminous coal producer. Thurber also had the most prolific vitrified paving brick plant west of the Mississippi thanks to high quality local clay deposits.

So keep an eye out for Thurber bricks. I see them all over Texas! In fact, these are the same red bricks you see in the Fort Worth Stockyards, the Galveston sea wall, Congress Avenue in Austin, Camp Bowie, and throughout many towns where the main roads are still paved with brick.

From Company Town to Ghost Town

At one time, Thurber was a company town, just like the one Tennessee Ernie Ford sang about in his famous tune “Sixteen Tons.” In Thurber, you truly could “owe your soul to the company store” if you weren’t careful.

Texas and Pacific Coal Company is “the company” I’m referring to; it owned and operated everything in Thurber from the housing, restaurants, and stores, to the churches, opera house, and cemetery. (Yes, we’ll get to the cemetery eventually!) The company even printed its own scrip, paper money that could be spent in the town of Thurber, and nowhere else!

Citizens from all over the World

Thurber’s work force hailed from all over the world, including Italy, Poland, Ireland, and Russia. The local Catholic church was named St. Barbara after the patron saint of coal miners, and the priest heard confession in several languages.

A large percentage of Thurber residents were Italian (see the headstone above), which may explain why the Metropolitan Opera troupe once stopped in Thurber en-route from the east coast to the west. Not to mention that Thurber’s opera house was pretty swanky for its day. Not only did it seat 665 patrons, but it included ceiling fans and private opera boxes.

The discovery of oil and the ensuing West Texas boomtown frenzy led to Thurber’s demise. As steam trains switched to oil, the demand for coal dwindled. By 1935, most of the town’s inhabitants had moved on and the mines were abandoned. Even so, Texas and Pacific still owns the remaining coal: all 127,000,000 tons still buried beneath this once-thriving city.

Neglect and Vandalism in Thurber Cemetery

As the townsfolk moved away, no one was left to tend Thurber’s 9.1 acre cemetery where some 1000+ residents are laid to rest. So from the 1930’s on, the graveyard became increasingly overgrown. As if that wasn’t bad enough, a rancher let his cattle graze there, and another man ran a bulldozer through the area.

For some reason, Thurber Cemetery has also been the target of vandalism several times. This vandalism isn’t just the result of “rowdy kids” as people often assume. For instance, the man most recently convicted of using a dump truck to crunch up the marble monuments dedicated to the unmarked graves of Thurber’s coal miners was in his 50’s. (I wonder what his motives could have possibly been?)

Rescued by the Thurber Cemetery Association

After decades of neglect, the Thurber Cemetery Association was created in 1990. Since then, the group has spent time righting headstones, clearing brush, and doing extensive research to bring the graveyard back to good shape.

A sign by the cemetery gate credits Leo Bielinski for his persistent efforts towards maintaining and protecting this historic graveyard. Without his continued efforts, this historic site would be little more than a pile of broken stones in an overgrown field. (Here’s a link to Leo Beilinski’s website about Thurber, Texas; it has a lot of great information.)

Last time I visited Thurber Cemetery, it was looking good! I was so happy to see that the wrecked memorials have been fixed. (Here’s an article about the dedication ceremony for the new cemetery monuments in Thurber, Texas.) It’s also good to see that there are security cameras to photograph your license plate as you go in. It’s a pity that they are needed, but they seem to be doing the trick.

Thurber Cemetery as an Open-Air Museum

I often tell people that historic graveyards are open-air museums. Thurber Cemetery illustrates this idea perfectly. Headstones here reflect the varied ethnic background of Thurber’s residents, and some epitaphs are in languages other than English.

While Thurber’s monuments are not as artistic or fancy as some graveyards I’ve seen, many of the graves feature plaques revealing interesting facts about the person buried there or the meaning behind the symbols on their headstone. It really enriches the experience and enhances the feeling that you are strolling through an outdoor museum.

With such an interesting past, you can bet that the Thurber Cemetery has some intriguing historic tales to tell. So stay tuned, because I will be sharing one next week about the elaborate burial preparations made by a quirky Hungarian coal miner named Anthony Bascilli.

How to visit Thurber Cemetery

Like so many historic graveyards, Thurber Cemetery doesn’t have an official street address, but it’s pretty easy to find. Also, there’s a gate and no key is required. My advice is to point your GPS to the Smokestack Restaurant (239 Private Road 741 Mingus, TX 76463.)

If you’re hungry when you arrive, it’s well worth grabbing a bite to eat. I love that place! Afterwards, just continue up the dirt road that wraps around the restaurant and turn right at the green cemetery sign. Once you drive into Thurber Cemetery, the road makes a loop through it and takes you right back to the gate. I’d also suggest searching for “Thurber Cemetery” on Google maps before you go. If you spend a few minutes playing around with street view, you’ll have your bearings when you get to the restaurant and know exactly where to go.