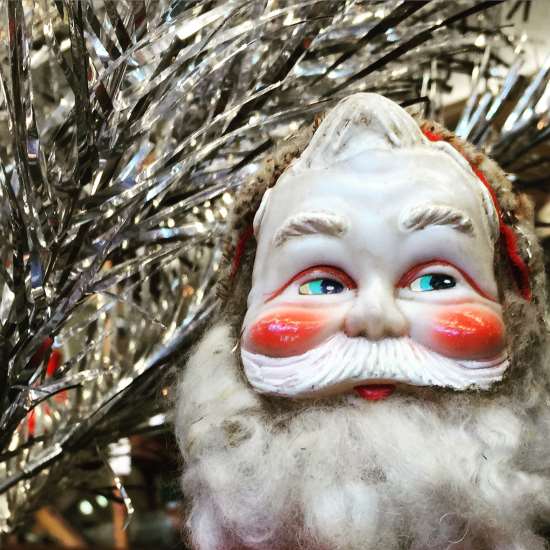 You’ve probably been aware of Santa Claus since you were a toddler. Simply knowing a big, bearded guy at the North Pole has the OCD super power ability to not only see your every move, but to determine whether your collective annual activities should be labeled “bad” or “good,” probably even influenced your behavior from time to time.

For instance, once when my nephews were 3 and 5-years-old, I overheard them squabbling in their bedroom. I was just about to step in when the older one said, “We’d better quit fighting.”

“Because Santa is watching.”

Needless to say, their behavior improved dramatically and no policing on my part was needed!

So while you’ve known Santa Claus has been keeping his eye on you your whole life, here are 5 quirky facts about the jolly elf that you may not have been aware of:

1. Santa Claus is Officially the Richest Man on Earth

In 2005, Forbes magazine named Santa Claus the richest man on the planet. Hey, it’s pretty tough to beat a net worth that uses the infinity sign! In addition to revealing the jolly man’s age (1,661 as of this writing), the Forbes article describes Santa as a “tubby toy titan” and dishes the dirt on labor disputes with elves.

For centuries, the marital status of Santa Claus was assumed to be single/available. He did, after all, originate as a martyred Christian Saint!

Finally, in 1849 the wife of Santa Claus was mentioned in a short story by James Rees entitled “A Christmas Legend.” Despite this leak to the press, few details were known about Mrs. Claus until 1889, when Katharine Lee Bates published “Goody Santa Claus on a Sleigh Ride.”

Even today, Mrs. Claus’ first name remains debatable, and why the Claus family remains childless is anyone’s guess. In addition, the exact date of Santa’s nuptials has never been revealed. Perhaps, like many celebrities, Santa Claus wanted to keep his marriage sheltered from the press as long as possible.

Come to think of it, despite his jovial habits each winter, Santa Claus is pretty reclusive the rest of the year. And while Santa Claus has an official snail mail address, his personal email appears to be secret.

Of the two, Santa’s wife certainly seems the more tech-savvy. Not only does Mrs. Claus have her own Facebook profile, but she also has as an Amazon author profile, listing a book called, Christmas Carol Lyrics – 264 Songs. And you thought *you* got tired of hearing Christmas carols!

On December 17, 1974 the U.S. Cabinet Committee to Combat Terrorism (CCCT) handed President Gerald Ford an 8-page document stamped “Secret.” While most of this report describes actual terrorist threats, one section is decidedly tongue-in-cheek:

“A new organization of uncertain makeup, using the name ‘Group of the Martyr Ebenezer Scrooge’ plans to sabotage the annual courier flight of the Government of the North Pole. Prime Minister and Chief Courier S. Claus has been notified and security precautions are being coordinated worldwide by the CCCT Working Group.”

I can’t help but think that the writer of the Santa Claus Papers missed a chance here. With a little more imagination, the ‘Group of the Martyr Ebenezer Scrooge’ could have been modified so that the acronym spelled GNOME. Ah, well. I suppose the CCCT had bigger fish to fry!

According to an excellent article by Timothy W. Meier, when a reporter asked why it took so long to declassify the Santa Papers, a spokesman for the CIA revealed that, “The second person who reviewed it for declassification didn’t realize that S. Claus was a source of ours so he left it in. We are going to find out who reviewed the S. Claus declassification and put a lump of coal in their Christmas stocking.”

As someone who does a lot of research, I try to sniff out urban legends as quickly as possible. I’m always suspicious of stories that sound too good to be true. So, upon hearing that the reason U.S.-Canada North American Aerospace Defense Command (NORAD) started tracking Santa Claus was due to a newspaper typo, the first thing I did was hop over to my favorite site for debunking urban legends: Snopes.com.

Snopes specializes in tracking the veracity of rumors, both online and off. The next time something seems too good/funny/cute or whatever to be true, see if it’s in the Snopes database before believing it, or passing it along on social media.

Anyway, much to my surprise, the NORAD tale turns out to be true! Here’s the scoop:

Back in 1955, a Sears store in Colorado ran a newspaper ad which included the phone number for a Santa Claus hotline where kiddies could talk to the jolly man 24/7. (To see a photo of the original ad: click here to read the Snopes.com article.)

Due to a typo, the published phone number was actually that of a top secret phone line to NORAD – a phone line that was only supposed to ring in cases of dire emergency!

As call after call came in from children eager to speak with St. Nick, NORAD’s Colonel Harry Shoup chose the “if you can’t beat ’em, join ’em,” tactic and instructed his staff members to provide children with the updates on Santa Claus and his whereabouts.

This tradition, inspired by an advertising typo, is still going strong today! Each year, NORAD tracks the whereabouts of Santa Claus and his reindeer on its website. There’s even an app out now.

After a West Texas bank was robbed by a man in a Santa Claus outfit, the pursuit of this bad Santa and his gang created an uproar during the 1927 Christmas season.

After a shootout riddling the bank with no less than 200 bullet holes, a car chase, and the abduction of two little girls, this particular Santa Claus and his gang became the focus of one of the largest manhunts in Texas state history.

And, yes, spoiler alert: Santa Claus eventually gets lynched – but the story does not end there! While researching the case for my book, Santa Claus Bank Robbery: A True Crime Saga in Texas, I found intriguing links to a “mysterious blonde woman” who appears in several eye-witness accounts, someone who may have even gotten away with murder!

It makes a great stocking stuffer!

My book, Santa Claus Bank Robbery: A True Crime Saga in Texas, makes a great stocking stuffer for anyone in your life who loves history, strange-but-true stories, true crime, quirky facts, the “weird west,” or simply needs a fun book to read on their next airplane flight!

If you have any readers left on your Christmas list, check out the #IndieBookmas Holiday Gift Guide. This is a list of books from a wide variety of genres. There’s bound to be the perfect book on there for everyone on your list.

There you have it. I hope you learned something new about that bearded guy up north who already knows everything about you.

And remember: Santa Claus is watching!

Before you go… Want to keep up with Tui Snider?