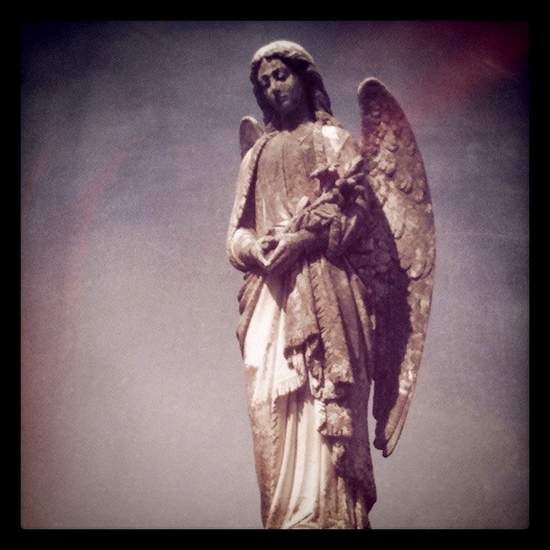 No matter what you believe, ghost stories can be a lot of fun. Each year, I host a Blog Carnival with true ghost stories as its theme. Last year’s was chock full of paranormal goodness, so if you’re still in the mood for more spooky tales after reading this batch, check out, True Spooks 2011, too.

“When I received an email from a friend asking if the Autumn leaves had peaked in my area, I decided to stop by the old farmhouse to take a photo of the glorious maple tree beside it. I didn’t think any more about it until that evening when my husband stumbled across the photo in our joint email account. “Honey,” he said, “where did you get this? Did you see the ghost in the window?” Sure enough, in the upper far right window of the farmhouse there appears to be a person staring outside, smiling at m “

“The first ghost I ever saw was the best a paranormal investigator could hope for – a full bodied apparition.  Only I was not on an investigation.  I was a sophomore in high school in a sleepy little mining town in Kentucky.”

“I saw a figure standing just outside our house looking down at the ground. It was dressed in a long brown or black hooded robe. I was surprised to see anyone there at all. No one has any business being on our property at that hour of the night”

“I’d never found any concrete evidence that ghosts really existed–even though I believed they did–until my trip to Bardstown, Kentucky. There, I communicated with Waleta using a divining rod, met some young mediums, and even snapped a photo of ghosts in the Jailer’s Inn where I stayed.”

“I’m not one to believe in ghost or things of that nature but last night something happened that I just can’t explain. I thought I would share the story with all of you and see if you can explain away this weird little happening.”

“The purpose of the Scare Me Blogfest is to write about the scariest book that you’ve read, Movie you have watched, Ghosts you have encountered, and/or to share your own scary story.”

“My husband and I both worked shifts, which meant I spent many nights alone.
While it became more and more difficult for me to go up to our room if DH wasn’t in the house (even in broad daylight, never mind the dark), I was a rational person and not about to give into my imagination…One night in the middle of winter, however, that changed….The three of us slept on the couch that night…and every other night that DH worked a nightshift for the rest of our time in the place.”

Other Anomalies: Not Quite Ghosts (but still quite odd!)

“Shadow people are human-shaped hooded forms that can be seen out of the corner of your eye. Strangely enough, the amount of eyewitness reports is increasing at an alarming rate. Is this because more people are talking about this phenomenon so others are admitting to it? Or is something more eerie going on?”

“Like many older cemeteries, the one in Aurora, Texas has a Texas State Historical Marker. While pioneers, cattlemen, farmers and soldiers often figure prominently on such signs, what makes this historical marker so unusual is that it mentions a spaceship crash in 1897. A spaceship crash? In Texas? In 1897? Yes, indeed! “

“There is a word for people like me. I am a “taphophile.” Simply put, it means that I love cemeteries and graveyards. As much as I love wandering in graveyards, there are rules of etiquette that apply. If you are thinking of a visit to a cemetery, I hope you will keep these in mind.”

“When investigating paranormal activity audio, recordings can be made and analyzed later, sometimes bringing sounds and patterns to the surface that I didn’t pick up with my ears alone, but after I review the audio, using WavePad, there’s an EVP!”

That concludes this edition, but – as I mentioned earlier – if you’re still in the mood for more spooky tales, check out: True Spooks 2011, too.

Submit your blog article to the next edition of 2013 True Spooks – Share Your Ghost Story using our carnival submission form. Past posts and future hosts can be found on our blog carnival index page.