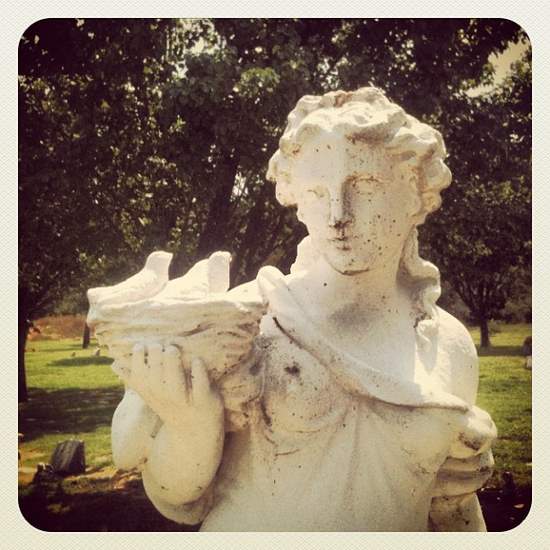 Texas is full of historic graveyards and I love exploring them. I rarely visit modern cemeteries, unless there is someone famous buried there or a particularly unique headstone to check out. For the most part, newer graveyards lack the history, the beautiful old trees, and the finely crafted headstones and monuments of the older ones.

Yesterday, however, I checked out a graveyard that has only been around since 1982. What made me curious about Smoke Rise Farm (11330 Mountain View Drive, Azle, Texas 76020) is that it’s a pet cemetery. I’d never seen an official animal graveyard before, so I wasn’t sure what to expect.

For one thing, when I hear the phrase, “pet cemetery,” Stephen King’s creepy novel is the first thing to pop into my head. For another, Azle, Texas is such a small town that I worried its pet cemetery would be little more than someone’s backyard dotted with St. Francis of Assisi statues. My suspicions deepened as the GPS announced, “You have reached your destination,” since at that moment, we were surrounded by homes in a modest neighborhood. We decided to keep driving, however, and soon spotted a graveyard on our left. (One thing I’ve learned is that Texas cemeteries can be hard to find and that it pays to be stubborn when tracking them down!)

Smoke Rise Farm Pet Cemetery is quite an operation. At five acres, it’s much larger than I expected. Like any other cemetery, it’s dotted with headstones and bouquets in a tranquil setting. The well-groomed grounds even feature a gazebo.

The main differences between Smoke Rise Farm and a cemetery for humans is the types of names you see on the headstones as well as the statuary. Where else are you going to see graves labeled: Doogie Bowser, Fifi La Fluff Nstuff or Puffy Buzzard? From what I could tell, the most popular pet name here in north Texas seems to be, “Muffin.”  Also, as expected, there were plenty of St. Francis of Assisi statues, but I also saw statues of poodles, dachshunds, cats, ferrets and even a gorilla.

Another big difference between a pet cemetery and a human one is that the lifespans indicated on the graves is much shorter. The longest lifespan we saw at this pet cemetery was on the grave of a horse, which lived to a hearty 30 years of age.

Even though I snickered at some of the names on the graves, I truly enjoyed my visit to Smoke Rise Farm Pet Cemetery. It’s a peaceful, park-like space, and a touching tribute to humans’ love for their animal companions.