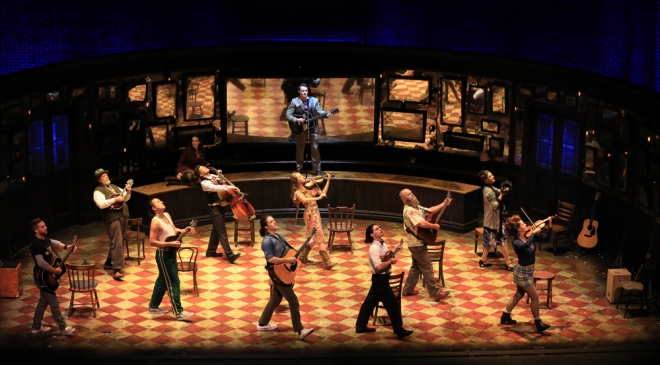 Opening Night Ovation for ONCE

Opening night for ONCE,  a multiple Tony award-winning folk musical, ended with a cheering crowd and a standing ovation at the Winspear Opera House in the downtown Dallas Arts District.

If you’re someone who frequently runs late, make sure you come early for ONCE. If you arrive after the show starts, you will not be allowed to enter for a full 30 minutes. The show is very quiet at the beginning and latecomers could disrupt the plot for the rest of us.

The other reason to come early is to grab a pint at the onstage bar and enjoy some live music up close. It’s a cozy touch that makes the show feel more like you are in a small neighborhood venue rather than the Big D’s Winspear Opera House.

What sets ONCE apart from other musicals is its low-key production. This is a musical that is meant to be listened to more than watched. In addition to the intimate staging, there’s no pit orchestra. Instead, the actors are actually playing their instruments!

The end result is quite charming. I came away feeling like I’d been to a concert in a small venue rather than a Broadway show.

Songs that stand on their own

Based on a 2007 movie of the same name, the musical version of ONCE tells the story of an Irishman who fixes vacuum cleaners by day and is a street musician by night. When we first meet Guy (Jack Gerhard), he is in a creative crisis, ready to give up his dreams of making it with his music. Lucky for him, along comes Girl (Mariah Lotz), a fellow musician who instantly connects with the messages in Guy’s songs and recognizes his tremendous talent.

Of course, the real “guy” and “girl” behind the show are the composers and lyricists, Glen Hansard and Marketa Irglova. Each of their beautiful songs can easily stand alone, outside the world of the musical. This is a musical soundtrack you could purchase and enjoy even if you never see the story. That said, the story by Enda Walsh, is funny, sweet, and moving.

At first glance, ONCE may seem like a romance, but it is more than that. This folk musical is a modern fairy tale clearly meant to inspire creatives to follow their dreams. After all, every creative person yearns for outside recognition, for some “fairy godmother” or “muse” to come along and give them permission to drop their mundane reality and dive headfirst into their creative passion. And as you step out of the theater humming tunes from the show, you may find yourself doing just this!

See ONCE in Dallas: