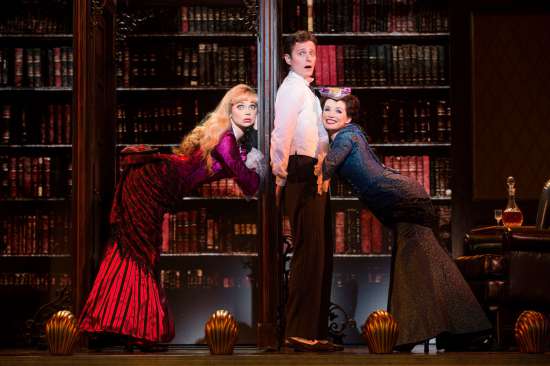 Review: A Gentleman’s Guide to Love & Murder @ATTPAC in Dallas

The national tour of A Gentleman’s Guide to Love & Murder received a well-deserved standing ovation last night in Dallas, Texas at the AT&T Performing Arts Center. It was easy to see why this Tony Award winning musical received so many accolades – including winning Best Musical and Best Book – when it debuted in 2014!

While the story revolves around a series of murders conducted by a ruthless serial killer, it’s actually a comical show that keeps you smiling and laughing from start to finish.

Fans of “Arsenic & Old Lace,” “Sweeney Todd” and “Clue” will instantly connect with the lighthearted black humor so capably rendered by A Gentleman’s Guide to Love & Murder. (And for those who live in the Dallas – Fort Worth area, Pegasus Theatre’s Living Black and White™ plays fall into this genre, as well!)

The Plot: Shades of Burton & Gorey

The story begins with an orphan named Monty Navarro (Kevin Massey) learning that his mother was an heiress who was disowned by her wealthy family. Monty’s mother, you see, had married for love instead of financial gain. This madcap tale of love and lust is set in Edwardian England, so any fans of Tim Burton and/or Edgar Gorey will be delighted by the costumes (which won a Tony Award) and the clever digitally-enhanced scenery (which was nominated for a Tony Award.) As someone fond of wordplay, the witty lyrics kept my interest and the story pace never lagged.

After Monty learns he is 8th in line to become the head of the wealthy and titled D’Ysquith family, he decides to avenge his disgraced mother by killing the D’Ysquith family members one by one. As dark as this sounds, the book and lyrics by Robert L. Freedman and the music and lyrics by Steven Lutvak will keep you in stitches throughout!

The humor varies from witty turns of phrase, slapstick, to the silliness of the characters themselves. Some of my favorite numbers include the wry, “I Don’t Understand the Poor” (which has a nearly spoken word quality to it that reminds me of Rex Harrison’s “Why Can’t a Woman Be More Like a Man?”) and “Better With a Man,” which is full of double entendres and hilarious choreography.

I should mention, too, that while we never see the 10-piece band in the orchestra pit, I thoroughly enjoyed how the instrumentation, heavy on clarinet, bassoon and oboe, perfectly matched the old-timey setting and scene.

The entire D’Ysquith family (9 characters, total) is played by one man, John Rapson, and he is just amazing! Not only does Rapson have a wonderful voice, but his energy and quirkiness kept me giggling from one character’s demise to the next.

As the murderous Monty Navarro, Kevin Massey somehow manages to remain rather likable despite his despicable acts. When not killing, Monty spends his time wooing two beautiful women: Kristen Beth Williams is delightful as the shallow and vain gold digger, Sibella Hallward, while her competition for Monty’s affection is Phoebe D’Ysquith, played to cute and bubbly perfection by Adrienne Eller.

One of my favorite scenes involves Monty juggling these two love interests by skillfully dashing between rooms during in his mansion to keep them from seeing one another. I should add that all three of them have voices worthy of an opera. In fact, there is not a weak voice in the cast.

Based on a movie

Film buffs may be interested to know that the plot for A Gentleman’s Guide to Love & Murder is based on a 1949 film entitled “Kind Hearts and Coronets” starring Alec Guinness in the multi-character role of the wealthy family members. But before you go stream that one on Netflix, catch the live performance of this madcap musical romp in Dallas while you can!