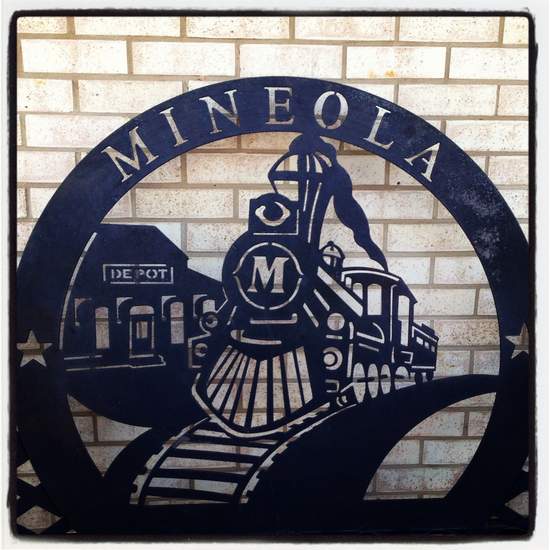 The following is an adapted excerpt from Unexpected Texas,my fun travel guide to quirky, offbeat and overlooked places near Dallas and Fort Worth. Check it out if you are looking for fun road trips in north Texas. Also, for a *FREE* 50-page guide to ghost hunting groups and haunted history tours in north Texas, sign up for my infrequent-but-interesting newsletter by clicking here:

Located at the junction of US highways 80 and 69, Mineola is situated in Wood County which, true to its name, is a highly-forested section of the East Texas Piney Woods. Early industries included lumber, farming and a chair factory, although things really got hopping once a railroad terminal was added and oil was discovered nearby.

It’s unclear exactly how the town of Mineola got its name. While some claim a railway official named it after his daughter, Ola, and her BFF, Minnie, others say the name was created by a surveyor who combined his daughter’s name with her friend, Minna. Either way, Mineola has a much nicer ring to it than Sodom, which is what the town was originally called. (You can’t make this stuff up, people. Well, you could, but in Texas, you don’t have to.)

In 1873, the International-Great Northern (IGN) and the Texas and Pacific railroad raced each other to see which line could reach Mineola first. The IGN squeaked into town a mere 15 minutes before its rival! The town incorporated in 1877, and despite a devastating fire, it soon became a bustling little burg full of churches, hotels, banks and several schools.

These days, Mineola is a peaceful little community with a population of 4,515 as of the 2010 US census. In springtime, the roads are lined with bluebonnets and other wildflowers. In autumn, it’s perfect for leaf-peeping, Texas style. This makes the region ideal for scenic drives, with impromptu produce stands and garage sales a common sight on your way in and out of town.

Amtrak Station in Mineola: enjoy a car-free road trip!
In its heyday, Mineola was a terminal for train crews and featured two railroad hotels, one on either side of the tracks. The railroad is still a big part of this city, which is one of the few small towns in Texas to have an Amtrak station. Since Mineola’s main sights are within walking distance of the train depot, and there are daily stops from both Dallas and Forth Worth, a car-less weekend getaway is a viable option. Visit the Mineola, Texas Amtrak train station page to book your tickets.

Things to See & Do in Mineola, Texas

Historic Downtown Mineola
Thanks to its designations as a Texas Main Street City since 1989 and a National Main Street City since 2000, Mineola has done a good job preserving its historic buildings. The downtown is still paved in bright red bricks, with streets lined with specialty shops, restaurants, and top-notch antiquing. Many alleyways have faded advertisements painted on them, as well as murals painted more recently.

Shopping:
As mentioned above, Mineola’s historic downtown is full of Mom and Pop shops, and has several worthwhile antique stores to explore. Stop by the Shop Mineola official website to see which ones are open when you visit.

Music on the Streets
Every Saturday morning, acoustic musicians are invited to head downtown, stand in a shady doorway or street corner and play solo or with friends. As you can see in the photo I posted, there were a couple guitarists picking and a-grinning on the day my husband and I visited.

Farmers Market
There is a small farmers market at the train depot in downtown Mineola every Saturday starting in May and continuing for as long as the weather holds out (most likely July or August.) Click on the Mineola Farmers Market official website to see what’s “growing on” when you come to town.

Birthplace of Miss Ima Hogg
While Mineola has many Texas State Historical markers, the quirkiest one I ran across is at 125 N. Line Street, where a plaque stands in front of the house where Ima Hogg was born on July 10, 1882. If you think “North West” is an odd name, imagine going through life as “Ima Hogg.”

While rumors of a twin sister named Ura have persisted, Ima was the only daughter of Jim Hogg, who later became governor of the state of Texas. Why he named her Ima is a matter of much debate, but Miss Hogg’s life was no joke. She never married, but devoted her life to art and philanthropy instead.

Blueberry Ridge Farm
The oldest certified organic blueberry farm in Texas is a short drive to the east of Mineola. During blueberry season, it’s a U-pick destination. It also has a country store called, oddly enough, “Country Store,” where they sell blueberry-related items, molasses, local honey, old-fashioned candy, goats milk soap and other items you might expect at a, well, country store. Check out the Blueberry Ridge Farm official website for more information.

Where to Eat & Sleep in Mineola

Kitchen’s Hardware
If you’re a fan of the Gilmore Girls TV show, then a restaurant in an old hardware store is not an odd concept to you. If not, well, get used to it, because Kitchen’s Hardware is here to stay. Larry and I dined here on the recommendation of our B&B hosts at the Munzesheimer Manor, and they did not steer us wrong. I ordered the the peppered steak and I’ve never had beef that tender in my life. The setting is a lot of fun, too; it’s like a hardware store museum, with its pot bellied stove, a hand-operated Otis rope elevator and other items from yesteryear everywhere you look. Check out the Kitchen’s Hardware Facebook page to see what the specials are today.

Munzesheimer Manor
Munzesheimer Manor is a consistently award-winning bed and breakfast, as voted by Inn Traveler magazine, the Dallas Morning News, Arrington’s B&B Journal and more. But really, all accolades aside, this lovely B&B makes a wonderful getaway from the hustle and bustle of daily life.

Talk about a home away from home! Munzesheimer Manor offers rooms in a beautifully restored Victorian home as well as accommodations in adjacent cottages. My husband, Larry, and I stayed in the railroad-themed Engineer’s room and we loved it.

Full disclosure here: When I’m traveling on a research trip, it can be very “rush-rush” but the innkeepers, Bob and Sherry Murray, made us feel so welcome that I really just wanted to toss all my notes to the side and kick back for a couple of days. In fact, Munzesheimer Manor is so wonderful that my husband has requested that I book us there again as proper guests rather than travel researchers! To book your getaway, visit the Munzesheimer Manor official website.

There you have it, folks! Mineola, Texas is a fun place to visit and there is lots to see and do.  Let me know if you decide to check out this cute little town, and if you visit any of the places I’ve suggested, tell ’em Tui sent you!