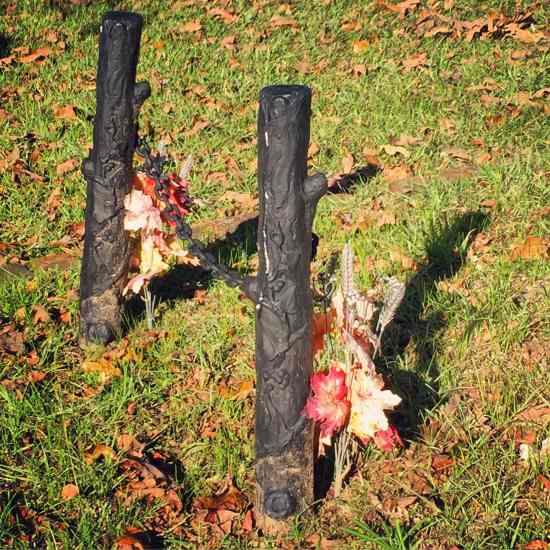 Historic Cemetery Symbols: Why Are These Men Chained Together in Death?

Here’s a grave marker that is quite strange and unique. In fact, I’ve never come across a similar arrangement! The following is an adapted excerpt from my book of historic cemetery tales called 6 Feet Under Texas.  (And to learn more about Understanding Cemetery Symbols, check out my book.)

Although they lived roughly 80 years before the word was coined, it’s hard to think of a better example for the word “frenemy” than the lives of Jesse Robinson and Bill Rose.

The two men lived in the east Texas town of Jefferson, where Bill Rose ran a blacksmith shop. As for Jesse Robinson, although he claimed to be a lawman and detective, it’s not quite clear how he actually earned a living.

Not only were both men known criminals and drunkards, but each had done time for murder, and were often seen around town together. In 1871, their rough and tumble reputation was enough to cause the local paper to refer to Jesse Robinson and Bill Rose as “dangerous and bad men, either drunk or sober.”

According to Angels of Oakwood: Jefferson’s Historic Cemetery by Mitchel Whitington, on April 4, 1871, Robinson bumped into Rose in downtown Jefferson, Texas. Robinson offered to buy Rose a drink, but his friend turned him down. In fact, it was a bit more than just a simple “no.” Rose told Robinson that he was giving up whiskey entirely in an attempt to improve his character.

Perhaps Robinson was having a bad day, and maybe he was worried about losing a valuable drinking buddy. In any case, Rose’s refusal pissed Robinson off so much that he chased after him, screaming and yelling about how he was going to kill him.

All over a drink!

The incident must have shaken Rose up, because the blacksmith went home and grabbed a gun before returning to his shop. Moments later, Robinson dropped by brandishing a six-shooter, eager to follow through on his death threat.

Seeing that his friend was in no mood to banter, the blacksmith fired a single shot at Robinson. As he ran towards the back door, Rose stopped him with a shot to the leg. As Robinson writhed on the floor in agony, Rose continued shooting his buddy at close range – six shots in all.

Shortly after murdering his pal, Rose staggered out of the blacksmith shop and into the street. As he began coughing up blood, he discovered a bullet wound in his chest and realized that he, too, had been shot. A passerby allegedly heard him mutter, “That rascal has killed me!” before Rose keeled over. He was carried home, but died shortly after.

Jesse Robinson and Bill Rose were laid to rest at Oakwood Cemetery in Jefferson, Texas. Not only were they buried side by side, but according to local lore, their coffins are chained together, too! Of course, whether that is true or not is impossible to tell from a casual visit to this historic graveyard.

However, as you see from the photos I’ve shared in this article, instead of a headstone, each man has a cast iron post at his grave, with a chain connecting the two. The posts are actually rather fancy; each was crafted to resemble a thick branch with ivy climbing up the sides.

Want to keep up with me? Also, would you like a FREE guide to historic cemetery symbolism? If so, sign up for my newsletter by clicking the image below:

In addition, I have also heard that when an actual chain is used to mark a grave it may mean that the deceased what a slave, and that each link of the chain represents a year spent in slavery! (See example here: Grave Symbolism Chains)

What are your thoughts regarding the symbology here?

Locals I spoke to claim this heavy chain in Jefferson’s historic Oakwood Cemetery represents the strong connection between Jesse Robinson and Bill Rose. After all, not only did they live similar lives, but they died by each other’s hands. (I wonder if the townspeople were inspired by the infamous chains that Jacob Marley was cursed with in Charles Dickens’ classic tale, A Christmas Carol?)

And that’s it! No headstone, no marker, no other item at all to label the place where these two ruffians are buried or to explain the deadly chain of events that sent them there!

Read more about this historic graveyards

For this week’s post, I used Angels of Oakwood: Jefferson’s Historic Cemetery  as my main source. It’s a wonderful book by Mitchel Whitington, who is a prolific author and historian who lives in Jefferson, Texas.

I recently had the pleasure of meeting Mitchel at the History, Haunts & Legends Paranormal Conference in Jefferson, Texas. Aside from being well-versed in local lore, Mitchel is a lot of fun. I highly recommend his books!

Jefferson, Texas is a picturesque town chock full of fascinating history and haunted lore. To read more about fun things to see and do in Jefferson, check out these posts:

The river plays such a big part in Jefferson’s history, that it’s well worth taking a ride on the Turning Basin Riverboat Tour.

For a luxurious stay in the heart of town, check out: My Relaxing Getaway at the Black Swan B&B

To be swept up in history and elegance, check out: I Felt Like Scarlet O’Hara at the Excelsior House Hotel

I recently wrote a field guide to historic cemetery symbolism. You can find it on Amazon by clicking here: Understanding Cemetery Symbols. It’s my goal to create a handy-dandy pocket guide for taphophiles, genealogists, ghost hunters, and anyone else interested in the historic graveyard symbols that have become forgotten over the years. I hope you enjoy it!

Let me know in the comments if there is a certain symbol that you are curious about. Also, if you would like to know when the cemetery symbolism guide is available for purchase, scroll down and sign up for my weekly newsletter! I look forward to hearing from you!