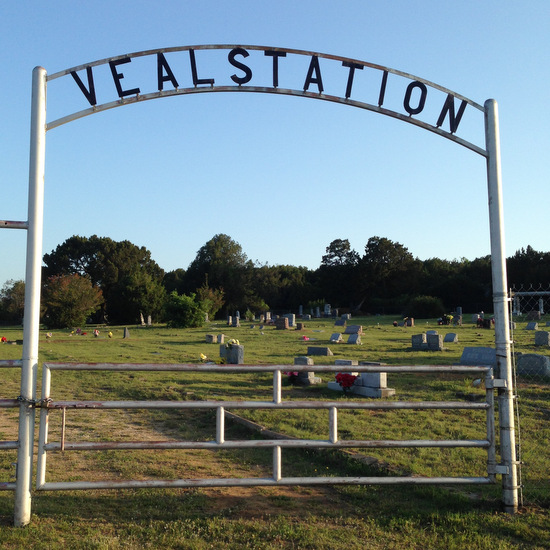 The following is an adapted excerpt from Paranormal Texas, my best-selling travel guide to haunted places and paranormal hot spots near Dallas and Fort Worth. Check it out if you enjoy learning historic haunted lore, or are looking for unusual road trip ideas in north Texas.

When I first moved to north Texas in the fall of 2009, I kept hearing about a glowing tombstone over in Springtown; it even made the local news!

Intrigued, I ran the story by my uber-skeptical, science teacher husband, Larry, who had a few theories. Some stones can be slightly radioactive, he told me, and that could cause a glow. Another idea was that a protective coating was painted on the stone, one that would be clear during the day, but would glow at night.

When the time came to research haunted places for Paranormal Texas, I convinced Larry to visit Veal Station Cemetery and see this glowing stone in person. According to several books I’ve read, including Ghosts in the Graveyard by Olyve Hallmark Abbott, and Ghosts of Fort Worth by Brian Righi, the glowing headstone belongs to William E. Wright. It’s tucked in the southwest corner of the graveyard, and is the one to keep an eye on after dark.

Larry and I made it to the graveyard in the late afternoon and quickly found the right, or in this case, Wright tombstone. Veal Station Cemetery is closed after sunset, but Wright’s grave is visible from outside the gates. This meant we could park our car and view it after dark without breaking any rules. (Keep this in mind should you ever decide to see Springtown’s glowing tombstone for yourself!) In the meantime, I took a bunch of photos and scoped out where we should look upon our return.

After dining in nearby Springtown, we drove back to Veal Station Cemetery. The first thing I noticed was that the graveyard was dotted with colored lights. We quickly realized these were solar-powered lights people had left at various graves.

My next false alarm came upon spotting a dozen or so twinkling yellow lights along the eastern edge of the graveyard. Even after figuring out that they were fireflies, it was still a thrill. (I love fireflies!)

Although my husband and I knew exactly where the Wright headstone was, we did not see anything glowing, not even the tiniest of flickers. It took some cajoling, but I convinced Larry to stay for at least 30 more minutes. Luckily, there was an interesting show on the radio to keep us entertained as we sat in the car.

By 9:30 it was truly dark, so we got out to investigate. And by “investigate” I simply mean that we leaned against the hood of our car and gazed over the peaceful expanse while enjoying the cicadas buzz and the fireflies flicker.

Alas, the Wright stone refused to light up for us, even then. I was so disappointed! Just as we were about to pack it in, however, I noticed a teeny little glimmer. As I stood and watched, the light grew brighter and brighter.

At last, a glowing headstone!

Much to my surprise, the light was not coming from the Wright monument. It was also, unfortunately, quite easy to debunk.

You see, Veal Station Cemetery is on a hill. As the moon rose, it caused a bright glow to emanate from a slanted headstone on the incline. In other words, the only glowing tombstone we saw that night was created by the moon’s reflection on a tilted stone.

Even so, I would definitely like to return to Veal Station Cemetery on a moonless night and give it one more chance! Now, if I can only convince Larry that it’s worth another try…