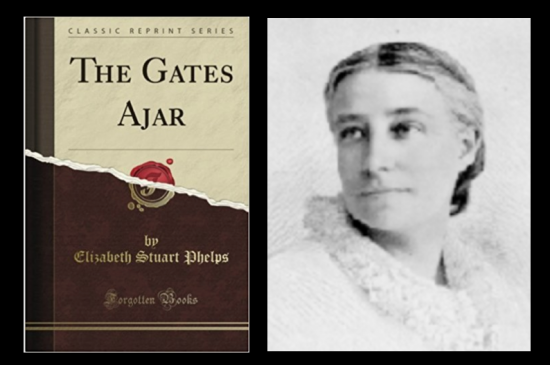 [The following is an adapted excerpt from my book, Understanding Cemetery Symbols. I hope you enjoy it! Also, full disclosure: that’s an Amazon affiliate link. If you buy my book after clicking it, I make a few pennies at no additional cost to you.]

How did a Victorian Era book influence cemetery symbolism?

In 1868, Elizabeth Stuart Phelps published a book entitled The Gates Ajar. Phelps’ book tells the story of a young woman grieving the loss of her brother, a soldier who died in the Civil War. After his death, the main character is unable to accept the senselessness of his death. She even finds her faith challenged as she questions the actions of God.

The Gates Ajar offered comfort to a grieving nation

The book’s main character eventually finds solace by embracing ideas from her aunt, who insists that the gates to heaven are not closed and locked, but slightly ajar. Since these gates do not close behind the dead, departed souls are able to pass back and forth between Heaven and earth. In this way, loved ones who have passed away are able to observe friends and family members who are still among the living.

In addition, the afterlife that Phelps describes in her books is a very pleasant place, where people remain in their human form and go about the same activities as they did in life, even playing the piano, for example.

The Gates Ajar Triggered a huge mass-marketing campaign in America

After the tremendous loss of lives during the Civil War, America was a nation in mourning. This was also a time when many Christians believed that God had already decided who would go to Heaven and who would go to Hell, regardless of their behavior while alive. Needless to say, there were many Americans who could relate to the conflicts in Phelps’ book.

Despite controversy, The Gates Ajar was hugely successful

On the other hand, critics of The Gates Ajar denounced it as misguided at best and heretical at worst. Despite all this controversy, (or perhaps, in part, because of it) Phelps’ book was wildly successful. In fact, The Gates Ajar was so popular that it triggered one of America’s first mass-marketing campaigns, including Gates Ajar clothing, cigars, patent medicines, and numerous songs, with titles such as “Gates Ajar,” “the Gate Ajar for Me,” “Passed within the Gates Ajar,” and many more. (The next time you come across an old hymnal, see if you can find any songs from the late 1800’s that pay homage to this book!)

The Gates Ajar floral arrangement is an enduring tradition

When you see monuments in cemeteries from 1868 and on, look for epitaphs referencing “gates ajar.” Many times when you see engravings of heavenly gates with the doors ajar, it is a reference to a controversial book that comforted a grieving nation in the late 1800’s.

READ MY BOOK: Check out my book, Understanding Cemetery Symbols. It’s available on Amazon in paperback and ebook form.