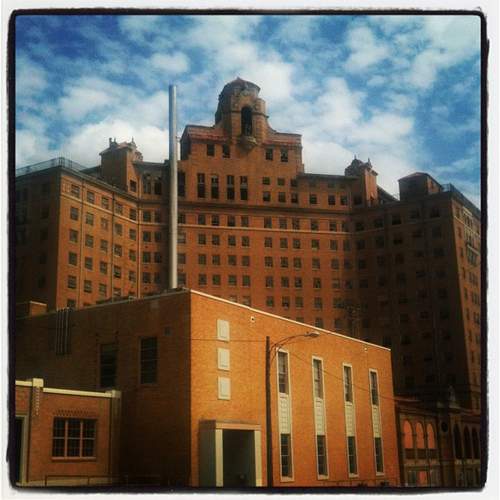 A to Z Texas: H is for the Healing Water of Mineral Wells

In the 1880’s, Judge James Alvis Lynch and his wife, Armenia, moved to north Texas and dug a well. At first, the couple was afraid to drink from it because the water tasted odd. After seeing that their livestock thrived, however, the pair began drinking from the well, too.

That’s when things got interesting.

Prior to drinking from their new well, James had a stomach issue and Armenia suffered from rheumatism. After drinking from it, the couple’s health conditions promptly cleared up. In fact, their whole family – which included nine children – seemed healthier after drinking the water.

Word spread of their well’s healing properties, and soon a town grew up around it: Mineral Wells, Texas.

Not only did the water make the Lynch’s healthy, but it made them wealthy, too. Judge Lynch sold the water for a dime per cup, which is more than a whole loaf of bread cost at the time. He even became the town’s first mayor.

In the early 1900’s, a man named Ed Dismuke moved to Mineral Wells. Dismuke was a young pharmacist from Waco, Texas who had nothing to lose; doctors told him that due to a stomach condition, he would be dead within the year.

Long story short: after drinking the healing waters of Mienral Wells, Mr. Dismuke lived to be 92!

Can you blame him for bottling and selling the stuff? He called his business the Famous Water Company.

Why is it called Crazy Water?

The nickname, “crazy water,” came about when an elderly woman who suffered from some sort of mental illness was allegedly cured after drinking the water from Mineral Wells, Texas.

Whether for good or for bad, the nickname stuck.

One month after the stock market crash of 1929, the Baker Hotel opened in Mineral Wells, Texas. You’d think the place would have suffered due to such disastrous timing, but that is not the case.

Sadly, in 1972, the hotel closed down. (It’s a long story, worthy of a separate article.) In 1982, the hotel was placed on the National Historic Register, but it has yet to reopen to the public. (Keep your fingers crossed!)

In the late 1990’s, a couple named Carol and Mike Elder bought the Famous Water Company and set about the task of reviving Crazy Water’s healthy reputation.

Crazy Water is once again for sale. (As research for this article, I just bought three bottles of the stuff.) According to regulators, Crazy Water contains magnesium, potassium, calcium, silica and trace amounts of lithium. If you visit the official website, Drink Crazy Wateryou can find out the exact ratios of the minerals in the water and more about its history. Crazy Water even has endorsements from hockey players, cyclists and other athletes.

I recently learned that in late 2012, the Famous Water Company began offering mineral baths to the public. I am so curious about these, and will definitely blog about the experience once I get a chance to check it out.

This was my post for the letter H of the A to Z blogging challenge. Tune in tomorrow to see what quirky Texan thing the letter I will bring!