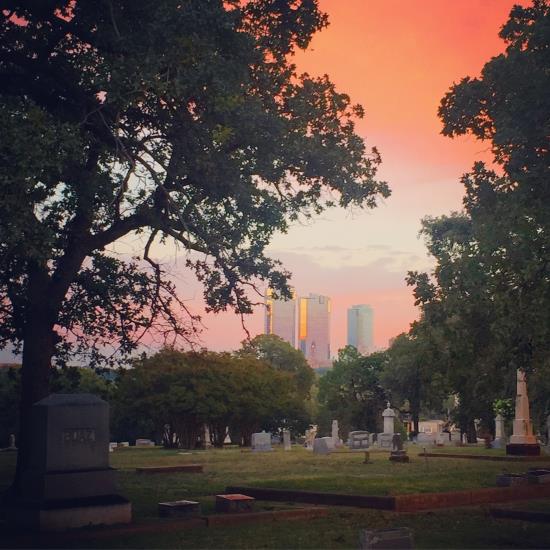 What do you get when you combine live theater, regional history, and a beautiful Texas graveyard? Why, the Annual Oakwood Cemetery Saints & Sinners Tour, of course! Yes, folks, the North Fort Worth Historical Society has knocked it out of the park again – and by “park,” I mean beautiful historic grounds of Oakwood Cemetery.

Each year, members of the North Fort Worth Historical Society choose notable figures from Oakwood Cemetery’s residents to “bring to life” through well-researched performances spaced throughout the grounds. (To read about last year’s cast of characters, check out my photo essay, about the 2014 Fort Worth Saints & Sinners Tour) The result is an entertaining and educational walk through local history!

I suggest arriving at least 30 minutes before your tour starts so you can mix and mingle with all the historic re-enactors from North Fort Worth Historical Society, enjoy the live music, and maybe even play a game of Faro, Poker’s Wild West cousin!

At a mere $10 for adults and $5 for students, Oakwood Cemetery’s Annual Saints & Sinners Tour is quite a bargain. The walking tour itself lasts about 1 1/2 hours (depending on which of the three tour guides you go with), and you can easily spend another hour or two chatting with the historic re-enactors and exploring the beautiful grounds.

This year, my husband and I had Oakwood Cemetery resident, Susan Polk Rayner (Marty Humphrey), as our graveyard guide. Susan proudly informed us that when she passed away in 1909, she was one of the last 3 *real* Daughters of the American Revolution! The other two guides were a saloon girl named Sadie (Debbie Clark), and Mollie Hunter (Melissa Hunter.)

And now, to learn about this year’s cast of historic characters resurrected for the 10th Annual Oakwood Saints & Sinners Tour, here are a bunch of photos I took along with descriptions taken from this year’s brochure:

Texas-born, Jacob Christopher Johnson came to the frontier Fort Worth as a young man with nothing. In a few years, he became well known in the local gambling fraternity and acquired half-interest in the legendary White Elephant Saloon.

He witnessed the gunfight between Luke Short and Longhair Jim Courtright. He built one of the finest mansions in the city’s silk-stocking neighborhood.

Although he was best known as a sporting man, Jake preferred to describe himself as a “capitalist.”

Richard S. Rockett’s family moved to Fort Worth in 1880. A carpenter by trade, he joined the Fort Worth Fire Department around 1893 and was one of the ifrst paid firemen in the city. Unfortunately, he met a sad and untimely end.

The health giving properties of hot chili peppers have no equal. Take it from the Chili King, who has a spicy story to tell! He tips his top hat to no one… except maybe the wind!

Why should someone visit the grave of the person who shot and killed them? Could it be guilty conscience … or actual love?

Gloating from beyond the grave…

We got to hear both sides of the story in this sordid lover’s tale that ended poorly – for both of them! Even so, Ms. Brown couldn’t help but gloat over the fact that her grave (over in Grandview) features a much larger headstone than Mr. Priest’s.

The Morton family arrived in Fort Worth on March 11, 1881. They were no different than thousands of other families leaving the war-torn South and moving West for a new start.

Sarah, also known as Sally, will recall the day the family arrived in Fort Worth and share memories of the towns’ cattle drives, schools, and saloons.

Sally is portrayed by her great-great-granddaughter (who used her Sarah’s actual journals as part of her research!)

Lula and Nat Grammer came to Forth as newlyweds. He was a druggist and she raised their children. As the city changed, so did their lives.

Anderson immigrated to the United States in 1873 from Norway. He settled in Fort Worth in 1875 and his rise to success started as quick as “lightning.”

What made someone shoot him?

Historic Graveyard near Fort Worth

Even if you missed the Saints and Sinners Tour, Oakwood Cemetery is a beautiful historic graveyard well worth visiting throughout the year. As you can see in the photo above, the city of Fort Worth’s skyline peeks through the trees in places and it is especially beautiful in the late afternoon light.

Have you been to Oakwood Cemetery before? Let me know in the comments below!