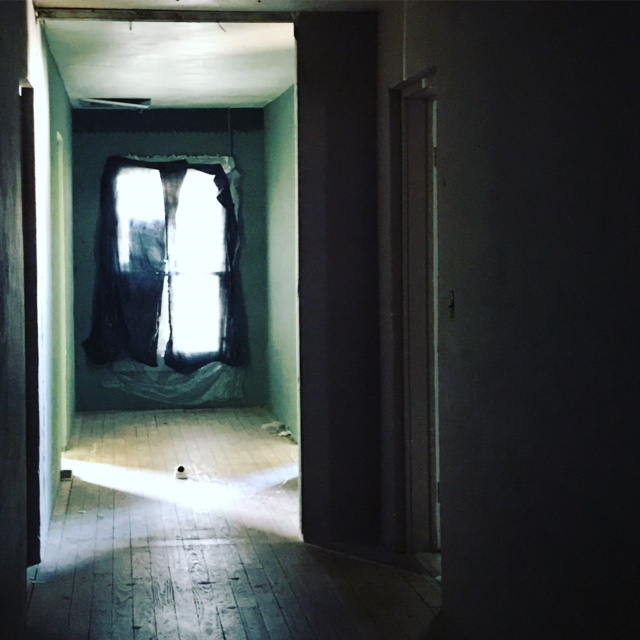 The following account is an excerpt from my travel guide to haunted places, Paranormal Texas.  I’ve included brief audio files of the EVPs mentioned, so you can hear them for yourself. Enjoy!

I also made a companion video for this blog post about the doppelganger at Olde Park Hotel, in case you’re interested:

When Becky Vickers invited me to investigate the Olde Park Hotel (OPH) in September 2017, I leapt at the chance. Not only is Becky friendly and fun, but she is an accomplished ghost hunter with a weekly radio show called “Bridging the Paranormal.” She and her team, BECKS Ghost Hunters, have even been featured on the TV show “Ghost Adventures.”

Greg Stephens, from Texas Research and Investigation of the Paranormal (TxRIP), was also in attendance. While Greg didn’t have his team with him, he brought decades of experience along with a heap of equipment. I met Greg while researching Paranormal Texas, my travel guide to haunted places. Since then, I’ve accompanied him on several paranormal investigations. He is always very organized and professional.

The Olde Park Hotel is owned by Dan Lafave and his wife, Connie. Dan has investigated the paranormal for decades and been featured on the news several times regarding famous hauntings in the San Antonio area. Not only did Dan give everyone a through pre-investigation tour of his haunted property, but he stayed during that actual ghost hunt. (I should add that Dan is also an author. I’m currently reading Shadow of the Ghost Hunter, but his book, The Supernatural, Texas & the West, sounds interesting, too!)

With so many seasoned investigators under one roof, I knew we were in for an exciting night! I say “we” because rounding out this crew was me and Larry.

In addition to being my spouse, Larry is a mad scientist and devout skeptic. Larry is so set in his non-beliefs, in fact, that I nicknamed him “Archie Debunker.” (Of course, if you read my story, “Message from Muriel,” you’ll know that Larry is not able to debunk everything. He certainly tries, though.)

The Olde Park Hotel is located in the charming little West Texas town of Ballinger. Like most historic buildings, it’s housed several different businesses over the years, including a secret brothel. Most recently, however, it served as a resale shop crowded with antiques. One theory for why the place is so haunted is that some of these objects had spiritual attachments.

If you’ve never been on an actual paranormal investigation, but you’ve watched lots of TV shows, then you may not realize how much time it takes to set up for a ghost hunt. It usually takes a couple of hours for a paranormal team to get a haunted location ready for an investigation!

BECKS Ghost Hunters was no different. By the time Larry and I arrived, they had already chosen a room as their command center. This is an important part of a serious paranormal investigation, and at least one person remains in the command center at all times. If they notice unusual activity in one of their monitored locations, they can let other team members know.

The Spirits were ready before we were!

As soon as Larry found a comfortable couch to sit and read his Kindle, I poked my head into the command center. I was about to ask if they needed any help when a man’s voice called out, “Alan! Alan!” from the hotel entryway. This was a loud voice, and everyone downstairs heard it.

Since all the men in our group were accounted for, a couple of us crossed the hall to see this newcomer. I assumed it was a friend of Dan’s.

Who else would walk right into the hotel without even knocking?

Much to everyone’s surprise, the entryway was empty, and the front door was locked. Even so, I stepped outside to look around. The sidewalk and streets were empty. Dan had told us that disembodied voices are a common occurrence at the Old Park Hotel, but we didn’t expect to hear one so early in the evening.

I didn’t even have my digital recorder on, and I’m not sure if any of the other investigators caught this voice. The experience was a good reminder that just because we weren’t ready for the ghost hunt to start,  didn’t mean that the spirits were going to wait for us!

We had a bunch of anomalous experiences that night at the Old Park Hotel, but the one I want to focus on here involves a phenomenon that I have never experienced before, a doppelgänger.

A doppelgänger is when a person seemingly appears in two places at once. My ghostly double made herself known early in the night. Immediately after we heard that disembodied voice shouting “Alan!” I went upstairs to a spot where Dan says investigators often catch EVPs.

While the team finished setting up downstairs, I conducted a brief EVP session. After turning my digital recorder on, I simply asked a question out loud, then mentally counted to ten before asking another question. Rather than talk the whole time, I wanted to leave plenty of blank recording space for spirits (or whatever it is that creates an EVP!) to reply.

At one point I said, “I’m just wondering if I have any company up here with me,” before slowly counting to ten in my head. I was about to ask another question, when Greg hollered up the stairwell.

“No.” I have a rather sing-song voice, so I figured that is what Greg had heard.

“It wasn’t you talking,” he insisted. “This was singing, and she sounded just like you.”

Even so, I didn’t give Greg’s remarks much thought. It wasn’t until the next day, when Becky messaged us and said that she could hear a woman singing, that I began to wonder what was going on.

Here’s where it gets really weird. If you listen to my recording, you’ll hear me say, “I’m just wondering if I have any company up here with me,” followed by several seconds of silence. This silence is only broken when Greg asks if I’m singing.

Unbeknownst to me, however, there was a second recording of this moment in time. Several minutes before my arrival, Becky had left a digital recorder on the table beside me. On her recording, immediately after I say, “I’m just wondering if I have any company up here with me,” you can clearly hear a woman humming a little song. Strangest of all, this woman sounds exactly like me! It is the eeriest thing. If I didn’t know better, I would swear it was a recording of my own voice.

Could this strange EVP be from my doppelgänger?

Listen to the doppelgänger EVP here:

You can listen to the EVPs here:

This is MY recording (Greg asks if I’m singing after several seconds of silence.):

BECKY’s recording (same exact time frame, but instead of silence, there’s an EVP that sounds like me, humming!):

Pretty weird, eh? If Becky hadn’t been taping at the exact same time, we would not have caught this anomaly. I would have assumed that I was humming a little ditty, but simply wasn’t aware of it at the time.

I’m so glad she had put a digital recorder nearby!

As I sifted through my recordings from our night at the Old Park Hotel, I came across another odd incident. Later that evening, I joined Greg and several others in a room where a mysterious death allegedly occurred.

“Oh, I’m right here,” I said, waving my hand at him in the semi-darkness.

“OK,” he said, pointing to his left. “But it looks like you’re over here.”

“I’m bilocating right now!” I joked, but Greg was puzzled. He went on to explain that he had just seen a slightly shorter version of me walk by on his left. “She looked exactly like you, same hat, same dress, same everything.”

Was this another encounter with my doppelgänger? Why was Greg the only one seeing and hearing this other Tui that night?

What are your thoughts on doppelgängers?

When I mentioned this to Archie Debunker, he didn’t roll his eyes or attempt to discredit the experience. Instead, Larry merely said, “Perhaps it was your counterpart visiting us from her existence in the multiverse.”

Since whatever it was looked and sounded like me, I feel comfortable calling it a doppelgänger. But what causes a doppelgänger? I can only guess.

Could it truly be, as Larry suggested, a version of me from a parallel reality? Or is one of the spirits of OPH a really good mimic? What do you think? Have you ever encountered a doppelgänger?

Must return to the OPH!

All I can say is that our night at at the Olde Park Hotel was full of surprises. I can hardly wait to return! When I do, do you have any suggestions?

You’ve just read an adapted excerpt from my travel guide to haunted places, Paranormal Texas.  Were you able to hear the EVP of my doppelganger singing? I hope you enjoyed it!

If you enjoyed this, check out my YouTube channel, where I share a videos about haunted places, historic cemeteries, offbeat travel and more! Join me!