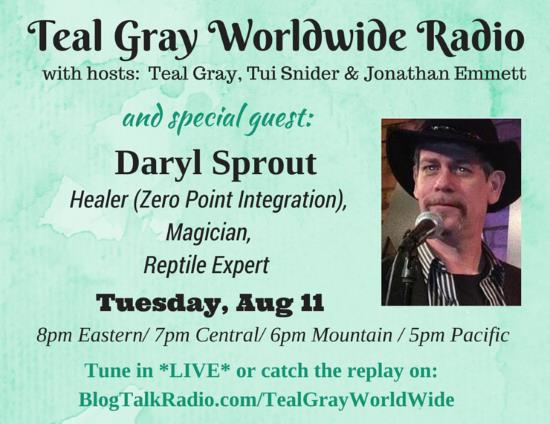 Tune in each *Tuesday* for Teal Gray Worldwide Radio

Join me (Tui Snider) and my co-hosts hosts Teal Gray, and Jonathan Emmett, each and every Tuesday for Teal Gray Worldwide Radio . Each week the three of us and our special guests have a lively discussion about offbeat, unusual, and downright strange places and events around the world.

Whether you listen *live* or catch the replay, we invite you to be a part of it!

This week on Teal Gray Worldwide Radio (a.k.a. TGWW Radio) we chat with the multifaceted Daryl Sprout.  Join me (Tui Snider), Teal Gray and Jonathan Emmett on TGWW Radio as we delve into the fascinating world of Daryl Sprout – snake expert, magician, and creator of a unique healing technique called Zero Point Integration.

After many years of doing talks at the Dallas Nature Center, word of mouth grew to the point that Daryl began Snake Encounters in 1993 to address the need for an accessible entity for the general public. It was established with the purpose of providing education on the subject of snakes in a humorous and entertaining way – in order to dispel myths, help audience members overcome the phobia, and to help guide the rapidly growing hobby of informed and responsible herpetoculture.

Daryl is fortunate to have a great collection of beautiful, patient animals who meet his strict criteria of docility, gentleness and distinctiveness – ensuring a program filled with wonder at nature’s beauty and adaptability. Unlike many other animal-oriented nature presentations, Daryl encourages a hands-on approach to the topics covered. Many of the animals seen can be touched and interacted with at the end of the show.

With the timing of a stand-up comic, the stage presence of a seasoned actor, and accomplished magician, Daryl does exciting, funny, fast-paced shows that are known for their high production values. Described as “Somewhere between Steve Irwin and Steve Martin” in style, Daryl became known in California as “The George Carlin of Herpetology.” He believes that the more entertained the audience is, the more of his important message they will absorb. The show IS educational, but the crowd is usually having too much fun to notice.

Immersed in metaphysics since the age of 19, Daryl Sprout gravitated early toward energy work. After early exploration with acupressure led to shiatsu, jin shin do and polarity work, he received his first healing certification in Alphabiotics (a holistic cousin of chiropractic that demonstrably reunites the hemispheres of the brain) in 1990.

A Reiki Master by 2010, later attunements to Karuna, Kundalini and Zero Point led to the exciting discovery of a hybrid he calls Zero Point Integration, which creates the alphabiotic effect without the physical moves. Very gentle and non-invasive, this work is incredibly fast and creates a demonstrable improvement in structural, energetic and emotional balance that tends to help dramatically with, essentially, everything. The experience is both palpable and profound for anyone who participates, even in a group setting – and is unaffected by distance.

Do you have questions about the show or for Daryl Sprout? Leave a comment here or on the TGWW Facebook page. During the live broadcast, you can also comment and ask questions in the TGWW Radio chat room, or by calling into the show! (See below for details!)

How to Listen to Teal Gray Worldwide Radio:

We hope you join us on Teal Gray Worldwide Radio whether you listen *live* or catch the replay!