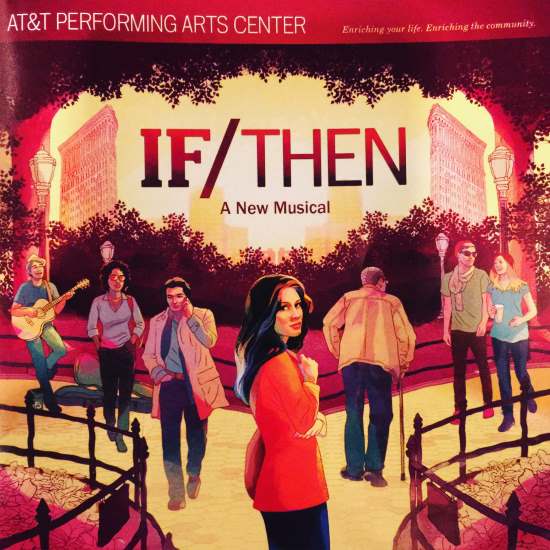 Opening night of IF/THEN at the AT&T Performing Arts Center in Dallas ended with a cheering crowd and a standing ovation. This new musical by the Pulitzer Prize Winning duo, Brian Yorkey and Tom Kitt, is a 2 and a 1/2 hour riff on the decisions we make in life and the consequences (both expected and unforeseen) these choices create.

At first blush, the plot of IF/THEN sounds similar to “Sliding Doors,” a 1998 movie starring Gwyneth Paltrow. “Sliding Doors” shows the myriad ways a simple event – in this case, either catching or missing a subway train – impacts the main character’s life.

“Sliding Doors” is a charming bit of rom/com fluff, and even though it explores two different timelines, the end result is less about the choices we make and more about whether or not “boy gets girl.”

While IF/THEN also follows a main character who shifts through different timelines, and romance is certainly a factor, its storyline is much more nuanced and thought-provoking than “Sliding Doors.”

Fresh out of a disastrous marriage for which she sacrificed her life’s ambitions, IF/THEN follows our main character, Elizabeth, as a seemingly small decision in the first act splits her life into two different story arcs.

Elizabeth is pushing 40, and her life is at a major crossroads. Yet, even though she is eager for a reboot, Elizabeth feels equal parts excitement and terror at the prospect. Looking back at what she now sees as 10 wasted years, Elizabeth suddenly finds it nearly impossible to make even the simplest of decisions.

What if she screws everything up – again?

The action begins with 38-year-old Elizabeth’s return to New York City, where she meets up with a couple of longtime friends in Central Park. After one invites her to a concert and the other invites her to a protest, the timeline of IF/THEN splits in two.

To help us follow this fast-paced and sometimes dizzying switch between storylines, Elizabeth becomes contacts-wearing “Beth” in one timeline, and an eyeglasses-wearing “Liz” in the other.

Having rebooted my own life a few times, I could relate to Elizabeth’s predicament, and this is a big part of what makes IF/THEN so much fun. While I found the music enjoyable, rather than humming show tunes on the car ride home, my husband and I wound up in a lively discussion of all the “what ifs” and “do overs” in our own lives.

Ultimately, IF/THEN reminds us there is no pause button in life and that even when we take charge of our decisions, we are never completely in control of the outcome. As Elizabeth remarks in one of the final scenes, “It’s never the right time,” by which she means that if you wait for everything in your life to be perfect before moving forward, life will pass you by.

It’s a good reminder for anyone who suffers from the paralysis of analysis!

Witty & Fun – but not for kids

If all this “philosophical what-iffing” makes it sound like IF/THEN is heavy or slow-paced; that is not the case. Aside from a few somber moments, I laughed my way through this witty, upbeat show. I should mention, however, that this is definitely not a musical for young children.

In addition to a few F-bombs (there’s even a song entitled “What the Fuck?”), what makes IF/THEN fast-paced and fun for adults would not keep a youngster’s attention.

Mature themes, and all that!

My favorite song and dance number from IF/THEN is the catchy and humorous, “It’s a Sign,” which manages to be both teasing and reverant about those moments in life that seem “meant to be.” It’s not often that a line like, “Today a pigeon shit right on my head/ It’s still in my hair”  comes off as playfully perfect rather than needlessly crass. (And full disclosure: it reminded me of an al fresco lunch incident in which several diners remarked how lucky I was after a pigeon bombed my bowl of soup. But that’s another story for another day!)

IF/THEN’s talented cast features strong voices and energetic performances throughout. Jackie Burns made the powerful vocals required to portray Elizabeth seem completely effortless. Tamyra Gray (Kate) knocked the aforementioned “It’s a Sign” out of the park, and was a delight throughout the entire show. (American Idol fans may also recognize Tamyra Gray as one of four finalists in the show’s first season.)

I also look forward to seeing more from the charismatic Anthony Rapp. In IF/THEN, Anthony Rapp (who originated the role of Mark in RENT) plays Lucas, Elizabeth’s closest friend. And while it would have been easy for Matthew Hydsik to let his portrayal of Josh, the hunky Nebraskan farm boy/soldier veer into something cartoonish, the character felt genuine and heartfelt.

So, the question remains: Will you or won’t you buy tickets to catch IF/THEN in Dallas? If yes, you had better hurry because this fun-yet-thought-provoking show only runs until the end of the month!