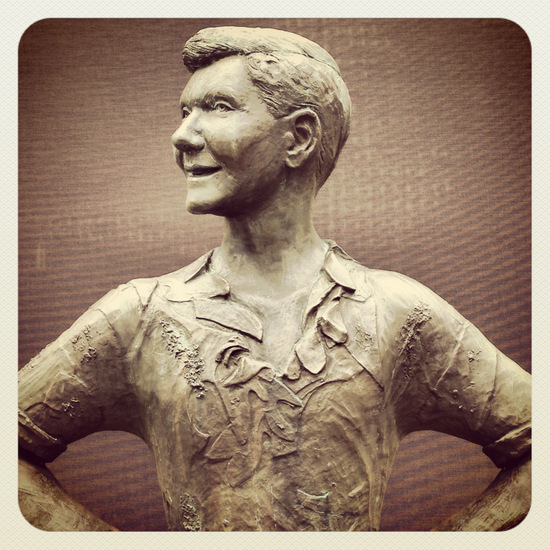 Mary Martin, the performer most strongly identified with role of Peter Pan, was born in Weatherford, Texas. This talented singer and actress was also the first to play Maria von Trapp in The Sound of Music, as well as Nellie Forbush in South Pacific.

In 1976, the artist Ronald Thomason created a life-sized bronze of Mary Martin as Peter Pan. The sculpture still stands in front of the Weatherford Public Library, and the photos you see in this post are ones I snapped when I visited town.

I must also say that, to me, while the sculpture is good, it doesn’t quite convey how stinking cute Mary Martin is. Check out some photos of her online and you will see what I mean.

I found it interesting to learn that Larry Hagman was Mary Martin’s son. He, too, became a famous actor, known especially for his roles on television as the astronaut Major Anthony Nelson in the 1960’s comedy “I Dream of Jeannie” and J.R. Ewing in the 1980’s nighttime soap opera “Dallas.”

To find out more about Mary Martin, Larry Hagman, and more Weatherford lore, spend an afternoon at the Doss Heritage and Culture Center. What started as a local library exhibit has expanded into a full museum that’s well worth visiting.