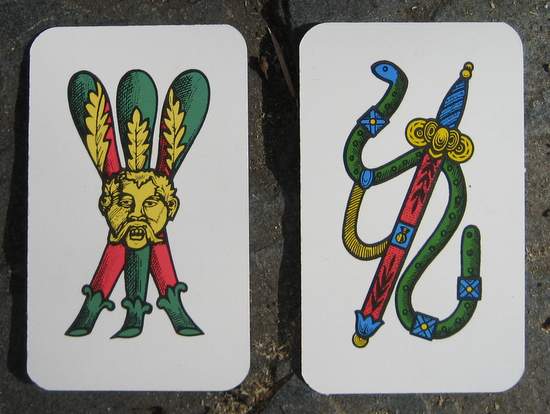 Differences Between the Neapolitan and American Card Deck

Did you know that in Naples, Italy people play cards with a completely different deck than we do in the USA? Unlike the American 52 card deck, southern Italians use a 40 card deck.

Also, Neapolitan cards are not numbered, so you need to count how many of that particular suit are on the card. The two of swords, for instance, has two swords drawn on it, but no numbers. This type of card goes up to seven. After that, for the eight, nine and ten, there are face cards. The entire deck is slightly smaller than the American deck, and I like how they fit into my hand.

The four suits in a Neapolitan card deck are:

– bastoni, meaning, “clubs,” and as you can see in the little drawings, they look a lot more like clubs than the clovers we have in our card decks.

– spade, meaning, “swords,” which look much more like swords than the spades in our deck. (But now the word “spade” makes more sense, doesn’t it?)

– denari, meaning, “money,” and as you can see it is represented by coins.

I’ve been told that denari corresponds to the American suit of diamonds, which makes sense, but I’m not sure how or why cups became hearts. If anyone out there knows, leave a comment. One thing I do know, however, is that the suits of the Neapolitan card deck are the same as the suits of the Tarot deck.

I think it’s interesting that of these four suits, two are weapons and another one is money, which – when you really think about it – can be a weapon in its own right!

The three face cards in a Neapolitan card deck are:

– fante, meaning “knave.” This card is worth eight points.

– cavallo, meaning, “knight.” This card is worth nine points.

– re, meaning, “king.” Which, as you probably guessed by now, is worth ten points.

Scopa and Briscola are the most popular card games played in Naples. These two games are played throughout Italy, but rules vary according to the region. There is even a 1972 movie named after a particular version of scopa called Lo scopone scientifico.

“Lo scopone scientifico” is a dark comedy starring Bette Davis and Joseph Cotten, in which Davis plays a cold-hearted be-yotch who pops over to Rome every year to play scopa for money with a poor couple. Even though she’s got cash coming out the gills, she gleefully wipes out their meagre savings. There’s a twist at the end, however, and Davis’ character “gets hers.” (Sadly, I couldn’t find this movie on Netflix, so I don’t know when I’ll get to see it.)

Everyone Plays Cards in Naples

Everyone plays cards in Naples, Italy – or so it seems. When I lived there, I would often see shopkeepers playing cards when I entered their stores. The butcher down the street was nearly always in the middle of a lively game. I think there must have been some money changing hands, because he and his buddies were really into their games.

I never minded when the butcher would tell me to, “Aspetta un’attimo,” meaning that I should wait a moment, because I got a kick out of watching the heated rivalry between he and his pals. I could always tell if he’d won that round, too, because of the smile on his face and how he would be humming a tune as he helped me. When he lost, he’d scowl and mutter choice words under his breath instead.

Why you should buy a Neapolitan card deck

If you ever visit Naples, I highly suggest that you buy a Neapolitan card deck. You can find them in most Tabacchi shops for less than five dollars. It’s a great way to meet locals, because later, when you’re kicking back at an outdoor cafe, sipping limoncello or eating gelato, you can pull that deck out and start looking through the cards. Someone is bound to notice, and before you know it, a friendly local will be at your table teaching you to play scopa or briscola.