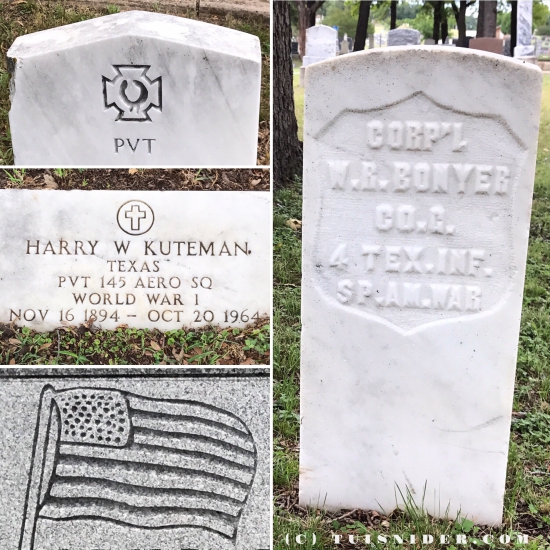 How to Identify Different US Military Headstones in Historic Cemeteries

Different Types of US Military Headstones

Since many of us visit cemeteries over Memorial Day Weekend to honor those who gave their lives serving our country, I’m sharing an excerpt from my book Understanding Cemetery Symbols about how to identify different types of US military headstones.

Here’s a video with even more examples and historic information:

You may also wish to learn: Memorial Day’s Surprising Origins. (Will you be setting your alarm for 3 p.m. on Memorial Day? I will!)

Yesterday was overcast, cool and breezy here in north Texas, perfect weather for taking photos in a historic graveyard, so my husband, Larry, and I went over to the beautiful City Greenwood Cemetery in Weatherford in search of US military headstones. Here’s what we found:

Civil War Type – not just for the Civil War!

Military headstones are a formalized style of grave marker, although their design has been modified over the years. The first official military headstone designs were adopted by the US War Department in 1873. These marble markers are 4 inches thick and 10 inches wide. As for height, regulations require the above-ground portion to stand 12 inches tall.

As you can see from my photos, these monuments often stand taller than 12 inches. So just because the original regulations say 12 inches, doesn’t mean that’s how you will find them in historic graveyards! Why? I’m not sure, but it’s important to keep in mind that many of these headstones have shifted or even fallen over over time, so they have been re-situated.

Look for an engraving of a shield:

Civil War Type headstones are decorated with a carved image of a shield which usually contains the soldier’s name, rank, and home state inscribed inside it in bas relief. The above ground marble is polished and has a slight curve along the top side. We now refer to this original US military headstone as the “Civil War Type” and were originally available only for Union soldiers.

Below is an example of a Civil War headstone for a Union soldier: Lieutenant (Lieut.) George Freeman, Company G (CO.C.) Second Division (2) West Virginia Cavalry (W.VA.CAV.) Note the rounded top and the raised lettering inside the engraved shape of a shield:

Civil War Design Used for Other Wars, too!

Although it’s called the Civil War Type, this style of headstone was also used to mark the graves of soldiers from the the Mexican War, Indian Campaigns, the War of 1812, the Spanish-american War and even the American Revolution.

I found a couple examples of this yesterday at Greenwood Cemetery in Weatherford, Texas. (At first glance, the one for the Spanish American War looks as if it’s for the SPAM War.)

Here’s another example of a Civil War Type US military headstone, only this one is for a soldier who served in the War of 1812. Apparently, at the time it was first engraved, all that was known about Abraham M. Pipkin is that he served in the Georgia Militia.

At some later date, his loved ones added an additional marker of their own with his birth and death date on it:

It wasn’t until 1906 that the US Congress passed a law to provide official military headstones for Confederate soldiers. Even so, these headstones differ slightly from other Civil War style markers; the tops come to a point rather than being rounded, and the shield design is left off entirely.

The photo below, for example, is for  Private (PVT) William G. Burrell of Company H (CO H) for the Confederate States of America (CSA.) The symbol at the top of the headstone is the Southern Cross of Honor, and means this soldier served honorably. Note the pointed top and the lack of an engraved shield:

The General Type – still in use today!

Shortly after WWI, a new design was created for US military markers. Called “the General Type” because the committee which created it included two generals (General John. J. Pershing and Quartermaster General Harry L. Rogers) this style of military marker remains in use to this day.

US Military Headstone: Emblems of Belief

The tablet of a US military General Type marker is inscribed with the soldier’s name, rank, regiment, division, date of death and home state. In addition, the General type of military marker allows space for a religious emblem. At first the only choices were a Latin Cross for Christians and a Star of David for Judaism. This has really expanded, however, and now includes emblems for atheists and even Thor’s Hammer!

It should be noted that veterans are not required to use official military headstone markers. They are provided upon request out of courtesy and respect. So when you visit a historic graveyard, don’t assume that the only veterans are the ones with official government headstones. Here’s an example, once again from Weatherford’s Greenwood Cemetery:

At first, the monuments for unknown soldiers differed from those whose name and rank were known. If you come across a numbered cube in a historic graveyard, there’s a good chance that it is one of these original Civil War type markers for an unknown soldier. These headstones are marble cut 6 inches on all sides and then 30 inches long. The top of this and the first 4 inches of each side are polished. Use of this numbered cube style of headstone for unknown soldiers was gradually phased out. (Unfortunately, I have not photographed an example of this style of grave marker… yet!) Unknown soldiers now receive the same style of headstone as those who are known.

Want to keep up with me?

READ MY BOOKS: Check out my books, including Understanding Cemetery Symbols. It’s available on Amazon in paperback and ebook form.