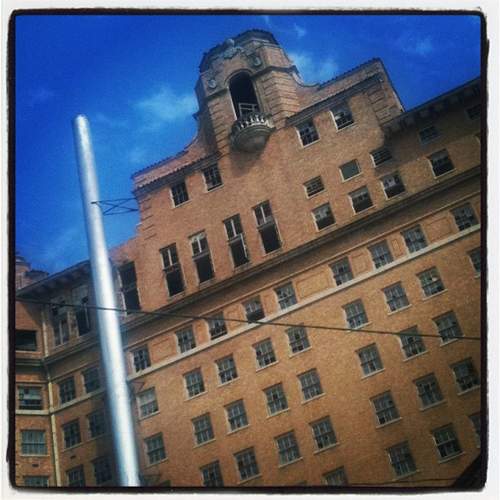 Even though I wrote a chapter on Mineral Wells in my first book, Unexpected Texas, I keep learning interesting things about this historic Texas town. (So much so that I’ve got another book underway – but that’s another story for another day!) Meanwhile, there’s so much on my Mineral Wells to-do list that I recently took a writing research trip there. My husband, Larry, and my pal, Teal Gray, came along for the ride.

We had a great time!

One of the haunted hot spots I describe in Paranormal Texas is known as the Haunted Hill House. Last August, I attended a paranormal investigation there with Shelly Tucker (a.k.a. Denton’s Ghost Lady) in conjunction with FEAR Paranormal. It’s a long story, but although we were booked to spend the entire night, everyone in our party bailed by midnight.

I was so disappointed!

Even so, my digital recorder caught some mysterious whispers. I can’t understand what is being said, but the tiny, whispering voice on this audio file does not belong to any of the living who were present that night. It’s *very* brief, but after listening to 45 minutes of me wandering around the house chatting, this strange little whisper really stood out. I’ll save you the tedium and me the embarrassment of listening to the whole clip, but here is the snippet that contains the tiny whisper. What do you think?

Listen to the mysterious whisper by clicking here:

The other “head scratcher” during my first visit to Haunted Hill House came while a group of us sat in a circle around a Spirit Box. As I excused myself to attend the local Baker Hotel Ghost Walk, a man’s voice came through and with no static at all, said, “Bye, Tui!”

The voice was so clear, that without thinking, I reflexively responded with, “Bye!” before exclaiming, “Hey, did that gizmo just call me by name?”

While I must admit I have very little experience with the Spirit Box, I found that brief exchange rather interesting!

Shelly Tucker had quite an emotional experience at the Haunted Hill House, but I feel that it is her story to share and not mine – if she even wants to share it! So, I’ll leave it at that.

I’ve been wanting to return to Haunted Hill House ever since! Last weekend, I finally got my chance – and it did not disappoint. But before I dive into all that, here’s a little background about the Haunted Hill House in Mineral Wells, Texas:

Built in 1892 by local pharmacist C.F. Yeager, the Haunted Hill House sits a few blocks east of Mineral Wells’ historic (and infamously haunted) Baker Hotel. For many years, the home was known around town as “the Kyle House” because Fannie Yeager Kyle and her sister lived there until the late 1920’s.

According to the Haunted Hill House website, after the sisters passed away, things turned a bit shady. There are rumors of a brothel as well as the production of illegal booze during Prohibition, but none of this has been substantiated.

In 2013, Phil Kirchhoff bought the historic home. He planned to remodel the place and retire there. Due to the high level of paranormal activity, however, Phil abandoned that idea and turned it into a paranormal research center, instead.

According to investigators, Haunted Hill House has at least nine distinct entities residing there. Exactly who they are has not been determined, but the most well-defined appears to be the ghost of a 6-year-old boy.

The home is now available for ghost hunting groups as well as those who simply want to experience a bona fide haunted house in person. For details, check out the Haunted Hill House website.

I should mention that Teal Gray, Larry, and I are part of a paranormal investigation team called Teal Gray Worldwide Investigations. Different groups have different specialties, and we are no exception.

For one thing, while most ghost hunting groups have at least one member described as being “the skeptic,” Teal Gray Worldwide Investigations includes a complete non-believer! My husband, Larry, does not believe in the paranormal and is convinced that every anomaly can be explained away if you look hard enough.

Teal Gray, on the other hand, is a talented psychic medium of the “I see dead people” variety. Meanwhile, I’m no professional psychic. I’m just a bit sensitive, for lack of a better term. (If anything, I tend to hear dead people from time to time!) That said, all three of us strive to find the most logical explanation for any seemingly paranormal phenomena we encounter.

I should also add that while our team enjoys ghost hunting, we focus on the actual history of an area as much as we do on gathering paranormal evidence. One of our main goals is to promote awareness of and respect for regional history.

Larry and I showed up at the Haunted Hill House in Mineral Wells a few minutes ahead of Teal, thanks to her moody GPS. This gave us a chance to catch up with the man who owns the house, Phil Kirchoff.

As I mentioned earlier, Phil Kirchoff originally purchased the house with the intention to fix it up and retire there. It may surprise some readers, however, to learn that Phil Kirchoff is a scientist!

That’s right, folks. Phil Kirchoff is an archaeologist specializing in the Pleistocene Era. He was even involved in the discovery of a new dinosaur named Hadrosaur discovered a few years ago near Arlington, Texas. Pretty cool, eh?

Prior to buying Haunted Hill House, Phil was not particularly interested in ghosts. The past two years, however, have been a crash course in all things paranormal.

Since Larry is a mad scientist and chemistry teacher, he and Phil hit it off right away. In fact, “the boys” hung out in the air-conditioned kitchen watching all the cameras and fiddling with the technical equipment while Teal and I roamed the house looking for ghosts.

The first impression Teal Gray picked up on was of several “ladies of the evening” hanging out in the sitting room. I didn’t feel anything, but there was a fan there, so I was happy to set the K2 meter on the couch and see if we could make contact.

Teal and I wandered slowly from room to room. For some reason, I didn’t take as many photos as I usually do. I just kind of “forgot,” which is weird for such an avid shutterbug as me! The same thing happened last time I visited Haunted Hill House. (Note to self: take lots of photos when visiting paranormal hot spots!)

I thought we might feel something upstairs, but aside from being hot and humid, we didn’t pick up on much there, either.

We had a lively 10-minute K2 session in one of the front rooms on the main floor, however. It was still pretty hot, and there were no fans or open windows, but at one point a freezing cold chill snaked its way up our arms. It didn’t last too long, maybe 30 seconds, but it was very noticeable.

As for our K2 session, we were able to ask questions and get a strong response for roughly 10 minutes, before we both felt as if the energy was done. Through a series of yes/no questions, we were told that 8 entities were with us, and that they liked Phil Kirchoff.

Since Phil had mentioned seeing a “shadow man” the night before, we asked about that and discovered that none of them liked the shadow man, either!

None of my photos picked up any anomalies, nor did I get any potential EVPs this time. I was a little worried, too, because I used the bathroom while recording. I figured Murphy’s Law would cause me to pick up a mysterious voice while I was “EVP-eeing!”

All in all, it was a fun visit! I look forward to visiting again.

Shortly after our visit to Phil Kirchoff’s Haunted Hill House, the three of us accompanied Greg Stephens as guests with his team, Texas Research & Investigation of the Paranormal (a.k.a. TxRIP) for our second paranormal investigation of the day over at the historic Crazy Water Hotel in Mineral Wells, Texas! As a history buff, I’ve been wanting to visit the Crazy Water Hotel for ages, but like the Baker Hotel, it is not easy to gain access (Thank you, vandals, for ruining the good stuff for everyone else – grrr!)

The three of us had quite an adventure at the Crazy Water Hotel. I actually saw something with my naked eyes that I’m still puzzling over, and the TxRIP team caught some bizarre anomalies (including a large, swirling vortex) on video! So… stay tuned for my upcoming blog post about our crazy time at the Crazy Water.

And, lastly, come back tomorrow to read about a completely unexpected paranormal experience I had in Mineral Wells, Texas. This strange experience was one of my favorite moments of the whole weekend, but did not occur during any of our ghost hunting expeditions! (You can also keep up with me and my blog by signing up for my newsletter: just scroll down to see how!)