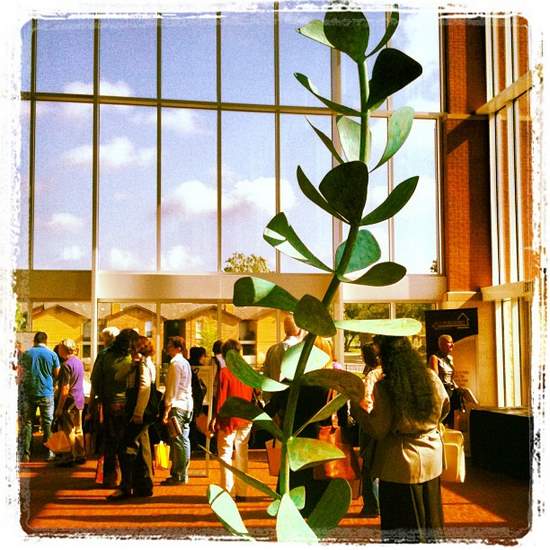 I recently attended my first-ever writers conference, the Dallas – Fort Worth Writers Conference, a.k.a. DFWCON in Hurst, Texas.

I had such a great time!

As you can see, I snapped a few photos with my iPhone, which I then posted on Twitter, Facebook & Instagr.am, because that’s the way I roll.

I stayed at the Hampton Inn in Hurst, Texas for the event and although it’s only 45 minutes from my house, I felt like I was on a big trip.

My husband came over each night after work, took me out to dinner, then stayed the night with me at the hotel, which added to the fun. We don’t have TV at home (just streaming internet, ‘cuz we’re so freaking 21st Century) so even watching the boob tube late at night was a treat.

The first night we ate at Italianni’s, which had fresh pasta and a great ambiance. The second night, however, was even better on the foodie front. Thanks to my iPhone’s Yelp and Urbanspoon apps, we found a fantastic hole-in-the-wall Greek – Lebanese place called Al Wadi. Wow! Al Wadi was so good that we returned for lunch on Monday.

I was nervous about my consult with an agent. Luckily, it was first thing in the morning so I did not have too much time to fret about it before getting it over with.

My Session with an Agent

Part of me worried that since I didn’t have a completed manuscript for DFWCON to pitch to an editor I was wasting my time having a consult. Note to self: that part of me was 100% wrong and owes me an apology! (Of course, I doubt anyone’s Inner Critic ever apologizes. Mine certainly doesn’t.)

The 10 minute session with Meredith Barnes flew by. In retrospect, I wish I had pitched a couple other ideas just to see how she would have responded. Why didn’t I tell her about my story about a corporate shaman, for instance?

The Big Question: Why Memoir, Not Fiction?

Also, I kept my pitch extremely short, nearly terse (Hemingway would have been proud!) because I had read that writers tend to babble during these pitch sessions and not give the editor time to respond.

In my case, however, it wasn’t until I expanded upon my bare-bones pitch that Meredith warmed up to my memoir about living on a tiny island with a population of seven people.

A question that Meredith left me with was this: Why are you writing this as a memoir and not as a piece of fiction? She told me that writing it up as a novel would be much easier.

Her question has been ringing in my ears ever since.

Believe me, the idea of hiding behind fiction is appealing, but it just doesn’t feel right. I can’t explain why. Plus, I have even tried writing it up as fiction, but it always stalls out after a chapter or two. Guess I need to mull this project over more.

I’ve got a *lot* more to say about the fabulous DFW Writers Conference, but – as I used to say in those postcards home from summer camp – I’ve got to go now. More soon! :)