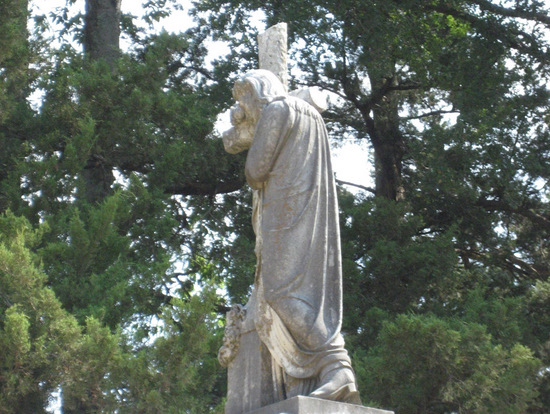 Cemetery Symbols: J is for Jesus …in Cowboy Boots!

I had such a hard time coming up with a good cemetery symbol for the letter J that I decided to re-post my entry for the 2013 A to Z blog challenge, in which my theme was Quirky Texas.

That was my first year, and I didn’t yet realize that A to Z posts are meant to be short and sweet. This is a fun one, though. Enjoy!

Please comment about this post on Tui Snider’s Facebook. Leave your link in the comments, and I’ll drop by your blog, too. You can also tweet me at @TuiSnider. (My blog comments are broken, but I’m trying to get that fixed. *sigh*)

After mentioning Paris, Texas recently in the post A to Z Texas: E is for Eiffel Tower I’m bringing up that little burg again because it’s home to a quirky statue known locally as the, “Jesus in cowboy boots.”

This statue is actually the 20 foot tall grave marker honoring a man named Willet Babcock, who died in 1888. While impressive, it would hardly be the quirky tourist attraction that it has become were it not for the unusual footwear worn by the cross-bearing figure it depicts; instead of the bare feet or sandals one often associates with Biblical folk, this one wears cowboy boots.

While I am also puzzled by the direction the Babcock monument faces, I do know that inverted torches are a Christian symbol (which I will explain in my A to Z post for the letter T!) I’ve seen that motif in other historical cemeteries such as Kensal Green: A Historic Victorian Graveyard in London and subsequently researched the symbolism.

Find out more about the April A to Z blog challenge, and check out the other participants!

Want to stay in touch?

For updates on my offbeat travels, books, & other fun stuff (such as postcards from the road!) subscribe to my newsletter using the form below:

Want to read my books?