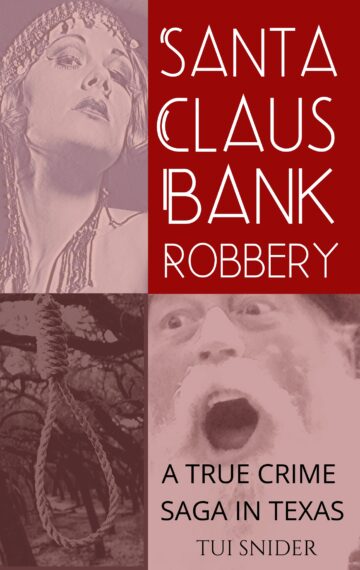 Think you know all about the Santa Claus Bank Robbery in Cisco, Texas? Think again!

Marshall Ratliff thought robbing a bank dressed like Santa at Christmastime would be easy. He didn’t expect the citizens of Cisco to come at him with guns blazing! But in 1927, a $5000 bounty was offered to any citizen who killed a bandit while the crime was in progress. Tui Snider’s new book follows the true-crime action from this wild shootout with vigilantes to its tragic conclusion.

Most “official” versions of the Santa Claus Bank Robbery (including magazines, websites, & even printed books) use fake names for key players. This keeps readers from knowing the truth.

Read Santa Claus Bank Robbery: A True-Crime Saga in Texas by Tui Snider to learn the true tale behind the infamous West Texas bank robbery that led to the biggest manhunt the Lone Star State had ever seen. Only then can you decide whether or not a mysterious blonde was involved – and if so, did she get away with murder?