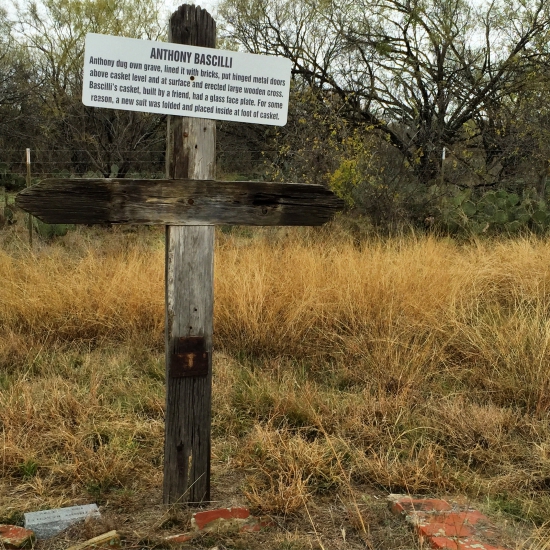 The Quirky Grave of Anthony Bascilli in Thurber, Texas

Anthony Bascilli was a quirky guy!

One of the most mysterious burial sites in historic Thurber Cemetery is the grave of Anthony Bascilli (1855 – 1932.)  Even in life, Anthony Bascilli had his quirks. According to Jeff Walker at the Texas Tabernacle blog, this Hungarian immigrant sometimes amused himself by getting drunk and tossing off half-sticks of dynamite while strolling the back roads of Thurber, Texas.

Bascilli worked in Thurber’s coal mines, so I suppose access to dynamite was easy. And you’ve got to get your jollies somehow, right?

What really sets Anthony Bascilli apart from other rowdy coal miners of his day, are the elaborate preparations he made for his own burial. For starters, he hired his buddy, Luigi Biondini (a.k.a. Gigi) and his son, Johnny, to build a custom coffin.

Slept in his own coffin

In the past, having your coffin built well in advance of your death was not that unusual. In fact, people sometimes added shelves and stood them against a wall to be used as bookcases until they were needed otherwise. Anthony Bascilli, however, wanted to make sure his coffin was comfy, so he slept in it for several years prior to his own eternal rest. (Someone even told me that Mr. Bascilli had a glass face plate in the front of his coffin, but I have not been able to confirm this.)

Mr. Bascilli’s preparations did not end there. Not only did he have his grave dug in advance, but he had its walls lined with brick and mortar. It must have looked a bit like an elevator shaft or a rectangular well.

Anthony Bascilli wasn’t content to simply have dirt piled upon his casket, either. He specifically requested that a steel door be placed above his body and then covered with a couple feet of dirt. After that, a second steel door would be placed before the final layer of dirt. Why do you suppose he felt the need to for two steel doors above him?

Whisky bottles hidden in the dirt

Bascilli even had plans for the dirt that would cover him: To ensure that it would be gently shoveled rather than roughly tossed into his grave, he allegedly hid bottles of whisky throughout the mound. I guess these were like party favors for the gravediggers! (Speaking of, last week’s historic graveyard post was about the Patron Saint of Gravediggers, in case you missed it.)

To top it all off, Anthony Bascilli has an air vent installed from the grave to his coffin. He wanted a key to the casket to be dropped down this pipe so that it would be inside the coffin with him. (When I visited the grave, I didn’t see an air vent, but from what I’ve read, it did exist at one time. Thurber Cemetery has been vandalized several times, so who knows?)

What were Anthony Bascilli’s motivations?

Frankly, I don’t understand Bascilli’s need for an air vent. Why not just be buried with the key? This part of the story makes me wonder if Mr. Bascilli had ever read Edgar Alan Poe’s story “The Premature Burial” and felt the need for a safety coffin to ensure that he was not buried alive.

Cross with an unusual photo

Also, Anthony’s wooden cross was originally much taller than what you see in my photos, and had a metal framed photo of his friend, Louis Piontek, on it. Why he’d have a photo of his friend and not himself at his grave is anyone’s guess.

And finally, Mr. Bascilli made sure that a brand new suit and pair of dress shoes were tucked into the foot of his casket. This, at least, makes sense. When Judgment Day came, he wanted to look his best.

Anthony Bascilli’s grave is one of those quirky Texas tales I keep hoping to learn something new about. I first learned about him while reading Ghosts In The Graveyard: Texas Cemetery Tales by Olyve Hallmark Abbott. (I’ve since had the pleasure of meeting Olyve in person. She’s a delightful lady and I highly recommend her books!)

One can only imagine that his friends and family must have teased Anthony Bascilli about his elaborate grave and burial plans. I sure wish he had left behind a written testimonial explaining his motivations in more detail. Whatever the case, I’m sure we can all agree is that Mr. Bascilli was quite a character!

If you enjoyed this article, stay tuned for next week’s post in which I’ll share the meaning behind a different cemetery symbol, and/or an interesting historic graveyard monument or story.  If you’d like to read more now, click here for: more historic cemetery symbols articles.

Would you like a FREE guide to historic cemetery symbolism? If so, click the image below to sign up for my newsletter, and I’ll send you one as a thank you: