When I first moved to Texas, I had no idea what people around here meant by the term “CFS.” To me, it sounded like shorthand for a debilitating disease!

I eventually learned that CFS stands for, “chicken fried steak,” or, “county fried steak,” depending on whose etymology you choose. Recipes vary, but the general idea is a battered fried cutlet. In Texas restaurants, it’s usually topped with a thick white gravy flecked with black pepper and a side of mashed potatoes.

Does CFS Have European Roots?

Like the hamburger, whose origins are widely disputed, the exact origins of CFS are hard to pin down.

Here in Texas, the town of Lamesa claims to have invented the dish and even holds a yearly Chicken Fried Steak festival to prove it.

Although recipes vary, Chicken Fried Steak bears a striking resemblance to Weiner Schnitzel. Considering that Texas had a strong influx of German and Austrian immigrants in the late 1800’s, Lamesa’s claim to fame carries some weight.

It’s also interesting to note that cookbooks prior to the 1920’s refer to this dish as Weiner Schnitzel, not CFS. It’s even been suggested that due to anti-German sentiment after World War I, the name was changed to Chicken Fried Steak out of political correctness.

Why the Cloud Photos?

I must confess that I don’t have any good photos of CFS. I’ve tried, but it’s not the most photogenic dish.

On the other hand, I have taken tons of crazy cloud photos here in Texas, and since “cloud” starts with C, I’m using a couple of those photos to adorn today’s post.

A to Z blogging challenge

This was my post for the letter C of the A to Z blogging challenge. Tune in tomorrow to see what the letter D will bring! 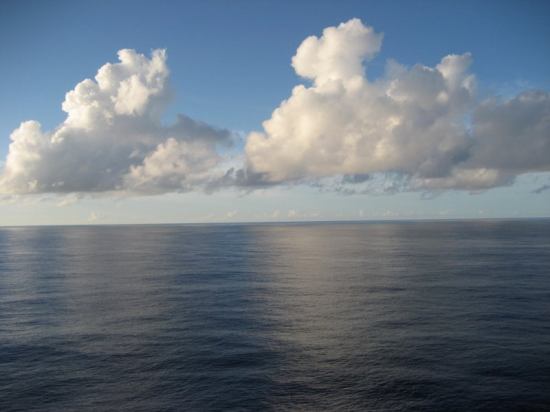 I failed to mention that Tex and I would be taking the long way home from London. In fact, we took a 14 day cruise across the Atlantic Ocean! I took a gazillion photos, including this one. The ocean seems to impress people in one of two ways, a person either finds it monotonous, or – like me – endlessly fascinating and dynamic. I loved watching flying fish soar over the swells, while the sea and sky made more costume changes than you might see at a Lady Gaga show.

By night, the stars were stunning and crisp. We saw several meteors, including a fiery orange one with a sparkly tail. Surprisingly, the roughest seas we encountered were between the Bahamas and Galveston; the mid-atlantic was like the photo above: silky smooth, with creamy white clouds that I wanted to eat with a spoon. I just might have, too, except the cruise staff kept us so well-fed.

At the moment, I have plenty of photos (and memories!) to sort through of London, Spain, Portugal, the Bahamas and the cruise ship. Thanksgiving in London was tremendous, but I miss my step-daughter even more acutely after such a brief cameo! I hope those of you who have wandered by here are having fun. I look forward to catching up with all y’all (as they say around here) both online and off. 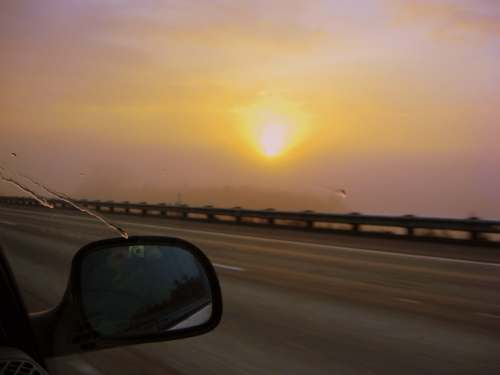 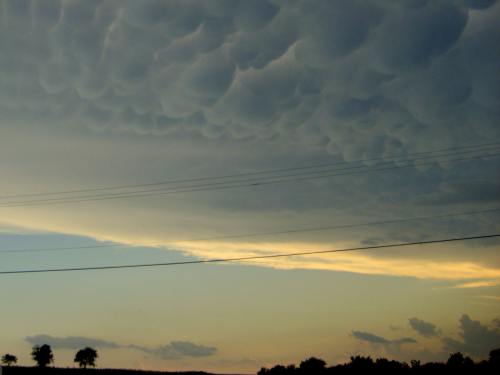 I’ve decided to see how far my ‘shots from the passenger seat’ obsession will take me this month. Before I explain today’s pic, however, let’s take a moment to grieve together over the ones that got away. I was not quick enough, for example, to get a photo of the billboard showing a 6 pack of Miller beer which read, ‘Show the recession who is boss.’ (I can’t help but wonder if the the ad team come up with that one after sampling large quantities of the product.)

I tried to get a photo of the furniture store marquis offering a ‘big man chair: 400 pounds,’ but it always came out blurry. One that simply caught me off guard was a billboard for a funeral home. This was pretty basic except for a banner tacked onto the bottom which read, ‘Now offering free wi-fi!’ (Does anyone really need to read Miss Manners to comprehend the tackiness of tweeting from an open casket service?) And lastly, I truly regret not taking a picture of the banner hanging at the Dallas Hilton, which read, “Texas Bidness.’ Bidness? (What is that all about? Should I have received a Texan dialect guide along with my voter’s registration?)

As for today’s photo, it was – in keeping with my unintentional NaBloPoMo theme – taken from the passenger seat. The photo doesn’t do the sky justice, but at least it gives you an idea. I don’t know when I’ve ever seen such bubbly looking clouds before.