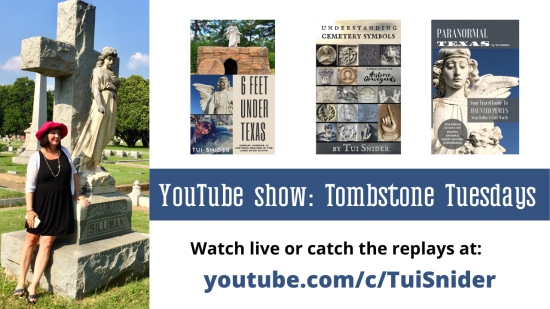 Upcoming guests? To be in the loop for upcoming guests, subscribe to Tui Snider’s weekly private newsletter. Here’s the link: Grab Tui’s free book when you sign up for her newsletter.

Replay link: Tombstone Tuesdays Show #13
Bio: Greg Bishop has been hosting radio shows since 1997, when he broadcast from a pirate radio station in LA. Since 2000, he’s been running a show called Radio Misterioso. If you are into UFOs, high strangeness, the paranormal, whatever you want to call it, you need to dig through the archives at radiomisterioso.com because he has interviewed so many key players and fascinating people, including Stanton Friedman, Jacque Valle, Eric Wargo, Red Pill Junkie, Nick Redfern, Dean Radin, Shannon Taggart… etc and so on! Greg is also a writer. In 1991, he co-founded a magazine called The Excluded Middle. He’s also written several books including “Wake up down there,” “weird california,” “Operation Beta,” and “It Defies Language.”

Replay link: Tombstone Tuesdays Show #12
Bio: Denise and her husband explore ghost towns, abandoned buildings, cemeteries, museums & historic places. They have a gorgeous website and a very popular YouTube channel. (Make sure you subscribe to it!) Colorado Martini even made the list as one of the Top 30 Colorado YouTubers on the web. She also hosts a podcast called “The Strange” – which is right up my alley. And here’s a quote from their about section on YouTube that I really like: “The past speaks. Let’s go see what it has to say.” We had a great chat!

Topics:
Why is Mattie Culver buried all alone in Yellowstone Park?
Why was Mattie’s body kept in a wine barrel?
Understanding the symbols on Mattie Culver’s headstone
Is this the real Sacagawea or an imposter? (Denise knows!)
Here’s the story behind Doc Holliday’s grave in Colorado
Did you know the “Gettysburg of the West” is in New Mexico?
Creepy history in Denver Botanical Gardens and Cheesman Park
Denise is interviewing a beer anthropologist next
The macabre history of New York’s Hart Island burial ground
What about the Denver International Airport?

Replay link: Tombstone Tuesdays Show #11
Bio: Mitchel Whitington is an author and paranormal researcher with a passion for history. He lives with his wife at The Grove in Jefferson, Texas, which has been called the most haunted home in the state, and is open to the public. Mitchel is the author of “Funeral & Mourning Traditions of the Old South” among more than 30 other books.
Topics:
What is the “Hora Fatal” aka “Fatal Hour”?
Why did they stop clocks at time of death?
Tradition of funeral vases on the front door
What are funeral dolls?
What are funeral tickets?
What are sin eaters?
History, Haunts and Legends in Jefferson, Texas
Why did Mitchel buy a haunted house called The Grove?
The Grove has been featured on TV shows hosted by Penn & Teller, William Shatner, and more
What was the Philip Experiment?
Strange Stairs and Secret Steps

Replay link: Tombstone Tuesdays Show #9
Bio: Janice Oberding is a historian, paranormal researcher, and prolific author. (We first met in a historic cemetery at midnight!) If her name sounds familiar, maybe you’ve read some of her 30+ books. Or maybe you’ve seen her on the Syfy, History, or Travel Channel.
Topics:
Grave of Mother Goose
Janice and I first met in a historic cemetery for a midnight seance
How long does lipstick last at a gravesite, such as James Dean’s?
This guy kept fancy coffins under his bed
James Dean’s eerie premonition?
Is this the rudest epitaph ever?
Her adventures (& misadventures!) on paranormal TV shows
She stayed in Alcatraz prison with the TAPS crew
She saw a freaky & scary creature – like a gargoyle – in this cemetery
Bizarre talking frogs & a mimic talking on the porch
Janice’s funniest paranormal investigation

Replay link: Tombstone Tuesdays Show #8
Bio: During his 25-year writing career, Harry Hall has written for the Dallas Morning News, been an award-winning radio talk show host, and taught public speaking. His background as a distance runner (he’s completed two Boston Marathons) inspired him to write The Pedestriennes, America’s Forgotten Superstars, which was honored at the 2012 Mayborn Literary Nonfiction Conference.
Topics:
How Harry discovered “the pedestriennes” (professional walkers)
Bizarre duck feet helped Harry find a long-lost relative
The richest, most famous 1800s woman was a professional walker
How Gen. Tom Thumb rocketed this female walker to fame
The Michael Jordan of his day – only more famous
How did they eat & sleep during races lasting days?
They poisoned her pets & tried to burn her house
What it’s like to visit the Library of Congress
Prima donna behavior leads to a pistol-whipped lemon peddler
This record wasn’t broken until a couple years ago
When and why did professional female walking die out as a sport?

Replay link: Tombstone Tuesdays Show #6
Bio: Robert Wright is a founding member of Sidestep Adventures. Sidestep Adventure is a video series documenting explorations of the South Eastern United States. Robert and his crew look for rapidly vanishing history and anything else that catches their eye. From ghost towns to forgotten homesteads, to rusty things and forgotten people, their goal is to document it before it’s gone.
Topics:
Bird feeders and a possum named Albert
Southern cemetery tradition: Moss in Old Biloxi City Cemetery
This cemetery has 4 museums & people get married there!
Robert shares the story of a forgotten cemetery that was bulldozed
Strangest location you have found graves?
What’s the weirdest thing you’ve found?
Finding a mummified cat
Why is it important to save history?
Tell us about the bomb you found under your house!
Robert tells us about finding human remains

Replay link: Tombstone Tuesdays Show #5
Bio: Icy Sedgwick writes dark fantasy and Gothic horror when she isn’t blogging about folklore, mythology, and weird superstitions. She also runs the Fabulous Folklore podcast, available on all podcast platforms.
Topics:
Father Time vs Grim Reaper
What do Urns symbolize?
Fringe vs Non-Fringed cloth symbolism
What are corpse roads?
​What are parish coffins and coffin rests?
What is a corpse candle?
Bioluminescent owls?
The real reason you should not walk across a grave
Newcastle’s vampire rabbit
Amish country in the USA hex symbols
Where Tolkien may have gotten his inspiration

Replay link: Tombstone Tuesdays Show #4
Bio: Kathy Benjamin is a writer and editor at ‪Grunge.com, and a former columnist at Cracked.com and MentalFloss.com. Kathy is the author of Funerals to Die For: The Craziest, Creepiest, and Most Bizarre Funeral Traditions and Practices Ever. Her new book, It’s Your Funeral: Plan the Celebration of a Lifetime Before It’s Too Late, is coming Summer 2021 from Quirk Books. Kathy lives in Austin, Texas with her husband, Simon and her dog, Briscoe.
Topics:
Coffin vs casket – what is the difference?
These coffins hang off a cliff – why?
Kathy tells us which president owns 2 fantasy coffins
This cemetery city looks like Hobbits should live there
Prague’s “church of bones”
Mormon grave robber banished to an island
Drive-thru funeral homes
Why so many men in Boot Hill died from “lightning strikes”
Colorful grave markers and funny epitaphs at Merry Cemetery in Romania
He hopes there are cheese sandwiches in Heaven

Replay link: Tombstone Tuesdays Show #3
Bio: David Kravetz is a freelance travelographer and focuses on the normal, the wacky, the wonderful and the quirky things of this wide world. His popular travel blog is called Less Beaten Paths and has nearly 400 posts about offbeat and back roads travel. He is also the author of a travel series called “Less Beaten Paths.”
Topics:
Yes, I can weave wheat!
Why Centralia, PA is a ghost town and its connection to Silent Hill
Eastern Orthodox/Byzantine/Greek Orthodox/Russian Orthodox Cross
What does “Theodokos” mean & why is it on this headstone?
There are over 300 types of cross
Why 3 bars on the Eastern Orthodox Cross & what do they mean?
Grave goods: bandanas
Monument for Future Birthplace of Capt. James T. Kirk
Hugo, Oklahoma – Showmen’s Rest, circus performers buried here
Paris, Texas – Jesus in Cowboy Boots monument
Uranus Fudge Factory

Replay link: Tombstone Tuesdays Show #2
Bio: David M. Habben has been documenting, photographing and researching cemeteries and grave yards for decades. His interest began when visiting the graves of blues musicians in Chicago, where he grew up. His work as a paramedic in Emergency Medical instruction and consulting has taken him all over the world where he has visited hundreds of cemeteries and taken thousands of photographs. He has, and continues, to study the history of cemeteries and the symbols and emblems on gravestones.
Topics:
Book of the Week – Footloose, Fancy & Free by Patricia B. Mitchell
The Afternoon Tea League (Living History Group) from Ken Reed.
Cemetery Tea parties
Monument that’s mistaken for a phallis
Why cops stopped David M. Habben, after he visited a little girl’s grave
Special graveyard section for sports fans
Why FindAGrave is so great – David is a longtime member
David’s cemetery symbol tattoo
Romani graves
Henry Ford’s mortsafe
Cemetery scavenger hunt

Replay link: Tombstone Tuesdays Show #1
Bio: Teal Gray is a sacred site traveler, artist, ordained non-denominational minister, professional psychic medium, and the author of several books. In her spare time, she quilts, sews, bakes custom cakes, grows lavender and has a line of bath and beauty products. She’s also a dear friend of mine!
Topics:
New Orleans cemetery photos from newsletter reader, Tammy Love.
The real reason you shouldn’t walk across a grave
Teal’s memento mori bracelet made from human hair
Obadiah Wheeler is one of the most famous headstone carvers in Colonial America. What makes his carvings so special?
How was Obadiah progressive in the way he refers to women and children?
For more topics along with timestamps see the replay!