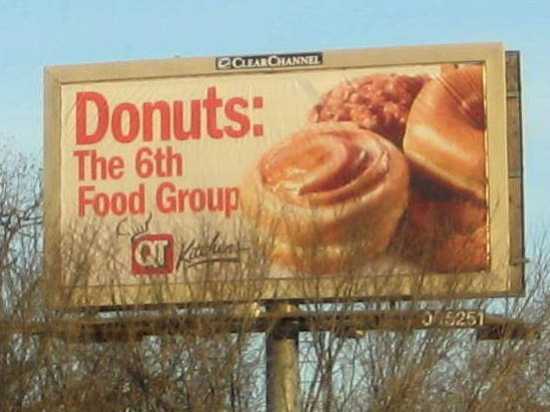 If you’ve read my blog much, you’ve probably noticed that I like to take pix of some of amusing billboards and post them here.

So far, I’ve blogged about the mysterious Hardcore Training Facility, the fact that in Ft. Worth Big Grandma is Watching You, and whether or not you’ve Got Gun?. I even lamented about the ‘ones that got away’ in my Bubbly Clouds post.

I’ve seen these donut ads for a while now, but have been holding out because there is a particular one I wanted a photo of. It shows this donut ad side by side with an ad for the human body exhibit, you know, the one where they have real cadavers on display? Talk about an appetizing juxtaposition!

This billboard reminds me of a conversation Tex and I had a while ago. To kill time while waiting for an order of chicken fried steak with chicken fried grits over at Ginger Brown’s, we drew up a Texan Food Pyramid on a napkin. As I recall, the pyramid’s many layers included chicken fried stuff, steak, bbq, things smothered in gravy, and queso. Oh yeah, I think we had bacon on there – twice – kinda sandwiched in between Ro Tel tomatoes and okra. Makes me feel bloated just writing about it all!

Back to the billboard, though, whatever happened to the “4 Basic Food Groups”? What’s the 5th one, soda? I do notice a lot more donut shops here in Texas. In fact, there are nearly as many donut shops as their are churches. Maybe folks need a good refined sugar buzz to carry them through lengthy sermons.