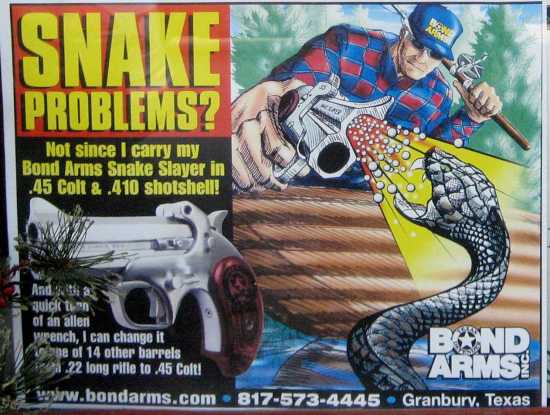 When I was a kid up in eastern Washington, I often carried pebbles in my pocket to toss ahead of me before stepping into tall grass. Sometimes I’d hear a rattler slithering out of the way afterwards. My little dog was good, too. She’d run ahead and keep the trail cleared of any snakes. I didn’t realize people ever shot snakes; so when I saw this ad for a snake gun proudly displayed in a shop window, it caught my eye.

The ad amuses me because the guy they drew looks a bit like Hunter S. Thompson. I can just envision a graphic novel penned in Hunter-esque prose about a macho Texan snake hunter. This main character would have a basement armory featuring weapons for all sorts of specialized nuisances, everything from mime attacks to bomb-laden armadillos.

At some point in the wacked out story, the protagonist would be so full of fear and loathing that he’d blurt out some of Thompson’s famous lines, stuff like: “I hate to advocate drugs, alcohol, violence, or insanity to anyone, but they’ve always worked for me,” and “When the going gets weird, the weird turn pro.”

Tex and I ventured into the shop, which was full of interesting knick-knacks, antiques, and post-Christmas deals. The whole time we wandered around, the man behind the counter was on the phone with various people. Every conversation was about guns.

The man behind the counter was still on the phone, blabbing on about firearms as he rang up my purchase, which was not a gun. At one point, however, he set a pistol on the countertop. The barrel pointed right at Tex’s belly. We exchanged nervous glances, before Tex gingerly turned the weapon around.

After he hung up the phone, the man behind the counter apologized, then took a moment to admire the string of beads I’d purchased. “Well, aren’t these just darling?” he remarked, while tucking them into a little bag.

I wanted to ask if he’d ever shot a snake, but I chickened out. Maybe next time.