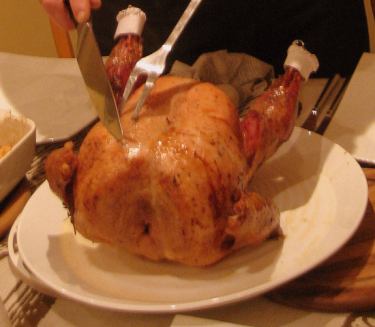 Voila! I have, at long last, visual proof that turkey pants, err, trousers, I mean, were actually worn by our London bird. In England, you see, ‘pants’ means ‘underpants.’ I discovered my faux pas after cheerily announcing that I had brought a pair of turkey pants, only to have a dinner guest reply, “I beg your pardon?” in that quintessentially British way, the very tone of which informed me I had – yet again – put my Yankee foot in my Yankee mouth.

My step-daughter, Naomi, created a fantastic Thanksgiving feast, starting with scrumptious bruschetta and ending with a key lime tart. We had all the usual suspects, too: mashed potatoes, stuffing, cranberry sauce, but the cranberry sauce was homemade, and there were some incredible turnips au gratin in the mix, too. She and my son-in-law are foodies extraordinaire, so there were plenty of photos taken of the spread. It was pretty as well as tasty!

There was no need to thaw our trousered Tom since he came from a nearby farm. That’s something I love about London; once you get out of the city center, there’s a surprising amount of countryside and greenspace. There are cows, crops, and sheep a-plenty right by Heathrow, for instance.

Our main London wildlife sighting this time were foxes we’d see darting through the chilly night as we walked home from restaurants and pubs. Naomi told us about one who frequents her backyard. The wily vixen stole a pair of her shoes, returned one nibbled sandal, then made off with a glove. (Did I get that right, Gnome? I was pretty jet-lagged when you told the tale.)

Apparently, fox have a thing for shoes. I typed “shoe stealing fox” into Google and found a bunch of incidents, including an article about a German fox who stole over 120 pairs of shoes for her kits to play with.

I usually visit Naomi and Max during warmer weather, which means that a picnic in Richmond Park is in order, but it was way too cold to ponder that. Still, I love the huge herds of deer roaming there. Plus, the trees and undergrowth remind me of what I’ve seen depicted in children’s book illustrations, which gives me a delightful fairytale feeling. I wouldn’t be surprised at all to hear the Pipes of Pan when I’m there, or to fall into a fairy mound. However, fairy mound or no, our Thanksgiving in London was truly magical and went by way too quickly!